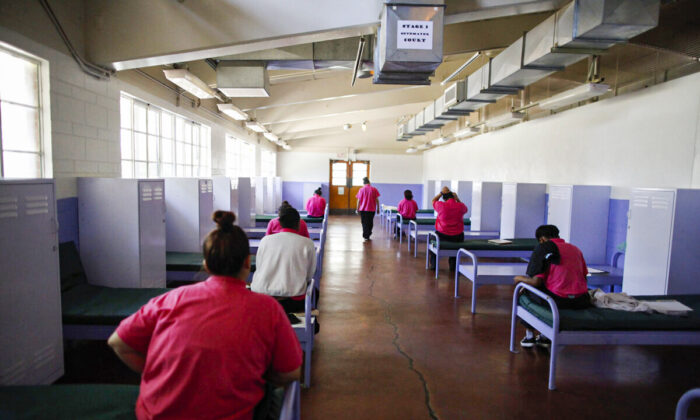 LOS ANGELES—At least 20 women say they were sexually assaulted over the course of a dozen years at Camp Scott, Los Angeles County’s all-girls juvenile detention facility, according to a lawsuit filed Wednesday.

The women allege a culture of abuse at the Santa Clarita Valley military-style boot camp, where they say no fewer than 10 staff members subjected them to repeated sexual assault.

The incidents occurred between 1996 and 2008, according to the lawsuit filed in Los Angeles Superior Court.

Many of the women say the violations started with staff at the detention center watching them shower and progressed to unwanted touching and eventually forced sex acts. In at least one case, a deputy probation officer is accused of impregnating a teenager, court documents show, while another staff member continued to victimize a different girl even after she was released, meeting her at a motel for sex.

“The perpetrators used this position of trust and authority to repeatedly sexually abuse juvenile females in their custody, care, control and direction,” the lawsuit states.

Don Meredith, a member of the L.A. County Probation Oversight Commission, said he could not comment on any ongoing litigation or criminal or internal investigations of Camp Scott.

Camp Scott was originally opened as a boys facility in 1958 and converted to house only girls in 1987. At the time, the facility was said to resemble a summer camp more than a detention camp. It was once touted by county officials and judges as a model for rehabilitating youthful offenders.

In the mid-1990s, the camp transformed into a military-style boot camp, where squadrons of girls in combat boots and khaki uniforms marched in strict drill formation across a concrete exercise field.

In the lawsuit, all the plaintiffs are identified by Jane Doe aliases, but one spoke with the Los Angeles Times using her name. The Times does not name victims of sexual assault unless they choose to be identified.

Akeila Jefferson, 38, said she was 16 when she entered Camp Scott a second time, and deputy probation officer Thomas Jackson began grooming her for sexual favors—slipping her toiletries, including soaps and lotions her grandmother couldn’t get to her.

First, he began touching her sexually, and eventually assaulted her four or five times in the laundry room, guard shack and camp office. He warned her he would make her time at camp difficult if she told anyone.

When Jackson was made acting assistant camp director, he ordered her to his office, where he forced her to perform oral sex, the lawsuit states.

“I know. Now that I’m thinking about it, it sounds like I should know that that was crazy, that I should ever feel like we’re in some type of relationship,” Jefferson told the Times.

When the girl was released a second time from the camp, Jackson took her out to eat, to shop, and to a rented motel room for repeated sexual encounters, court records show.

“I always felt I had to go. It never crossed my mind otherwise,” she said.

The abuse continued when she returned to the camp for the third time, the suit alleges, and even after her release at age 18 in 2001, Jackson continued to demand sexual acts.

Jefferson said she was once questioned by probation officials about her interactions with Jackson. “I told them none of this was happening and stuff like that, so he wouldn’t get in trouble. Because he told me that, you know, he’ll go to jail for a long time,” she said, adding that Jackson had told her he had been investigated several times before.

She said the sexual relationships at the camp were common, and officers claimed girls like property. “Other girls were with other probation officers,” Jefferson said. “It’s not really a secret … what’s going on. Everybody’s talking about it.”

The camp’s staff, made up of deputy probation officers, controlled every aspect of the girls’ lives and could cut off mail or visitations as well as decide punishments, including a day or more in “the box,” a solitary confinement unit.

“These young girls were treated as sexual property by the very people meant to protect them,” said attorney John Manly, whose prior litigation helped expose pedophile priests and well as the sexual abuse of USA Gymnastics doctor Larry Nasser and physicians at the University of Southern California and the University of California, Los Angeles. “We have law enforcement officers trading girls and rating them, and one even ended up pregnant.”

The suit reflects a pattern of sexual abuse similar to that shown in a 2018 U.S. Department of Justice survey that found hundreds of teens are raped or sexually assaulted in juvenile facilities. The vast majority were victimized by staff, with the perpetrators overwhelmingly male. Only 6 percent of teens in the facilities reported the abuse, the report showed.

In 2008, a two-year federal investigation found systemic abuse of youth in Los Angeles camps. A staff member at Camp Scott, which failed to report to the Los Angeles County Department of Children and Family Services an inappropriate relationship between a girl and a staff member, was implicated in two prior abuse reports. Threatened by a federal lawsuit, county supervisors opted to hire a team of independent monitors to improve safety at L.A.’s 19 facilities.

Two years later, a Times investigation in 2010 found that at least 11 employees working in juvenile detention halls and camps had been convicted of crimes or punished for inappropriate conduct involving current or former probationers, although many more had escaped discipline.

Wednesday’s lawsuit alleges the county did not take adequate corrective or preventative action and failed to comply with child sexual abuse reporting laws.

Manly said the Camp Scott staff targeted the most vulnerable, knowing their accounts would not be believed over those of the sworn officers.

Jane BA Doe was in her second 15-month term at the camp when a deputy probation officer identified only as Santana began groping her in the laundry room and watching her shower. Under threat, the lawsuit states, he lengthened the 16-year-old’s sentence, then escalated the assaults, “forcing (her) to engage in oral copulation and sexual intercourse” two or three times a week.

Court records show the girl became “pregnant with his child and thereafter experienced a miscarriage,” which he demanded she keeps a secret.

The officer continued to harass the girl after she was released, according to the lawsuit. After telling her guardian about the miscarriage after “being raped by the probation officer,” the sexual abuse was reported, and the county responded by transferring Santana to another facility, the lawsuit states.

Another camp supervisor is identified in the lawsuit as “Mr. Petty.” A 1996 Times article identified then-Assistant Director James Petty, who said at the time that each new arrival to the camp begins as a private, “just as I did in the military” and noted that the strict atmosphere is “an important step toward rehabilitation.”

One of the women said Petty ordered her to undress and shower at the camp while he watched. After she told her parents, her father confronted Petty, who then reassigned her to a less desirable work assignment, stopped delivering mail from her family, and terminated visitations. A staff member found the undelivered mail and, along with the girl’s parents, filed a complaint—which led to an investigation, but no apparent punishment, the suit alleges.

Some of the deputy probation officers, including Jackson and a man identified only as Officer Broadhead, are accused by multiple women.

The suit alleges that Jackson began to sexually abuse 16-year-old Jane HR Doe in 1999, ordering her to show her breasts as he masturbated. He threatened to make her life difficult if she did not give in to his sexual orders. She reported him to a female administrator, who dismissed her, saying it was difficult to believe her allegations given Jackson’s standing.

Jane EJ Doe recalled in court papers how Jackson and another deputy probation officer identified as Marks grabbed her breasts and buttocks. When she reported their behavior to Petty, the assistant director, he scolded her.

Another woman in the suit recalls how Marks and Petty openly “ranked” the female wards, “in relation to the physical attractiveness of, and their respective interest in sexual acts” with them.

While the sexual abuses alleged in the lawsuit date only through 2008, the Times investigation in 2010 and the federal probe in 2018 showed evidence of lingering exploitation.

In 2017, Oscar Calderon Jr. was sentenced to a year in jail after pleading guilty to two counts of felony assault for inappropriately touching two girls at Camp Scudder, another all-girls facility in Santa Clarita. In a lawsuit settled for $1 million over that abuse, the victims alleged Calderon’s supervisor, a therapist and as many as 10 probation staff knew about the abuse but did nothing to intervene.

County juvenile custody facilities have come under heavy state scrutiny again in recent years. A state corrections board decided in November that the county’s juvenile halls were “suitable” to house youths after previous inspections had placed the facilities in danger of closing. In 2020, county officials approved the eventual dismantling of the county’s juvenile probation system in favor of a new agency that will focus on emotional support, counseling and treatment. Federal monitoring of the facilities had only ended in 2015.

Last January the county reached a settlement agreement with the California attorney general’s office to improve conditions at juvenile facilities after a state probe found that detention officers unnecessarily used pepper spray, confined minors in cells for long periods forcing them to urinate into milk cartons, and prevented them from receiving medical care and attending classes.