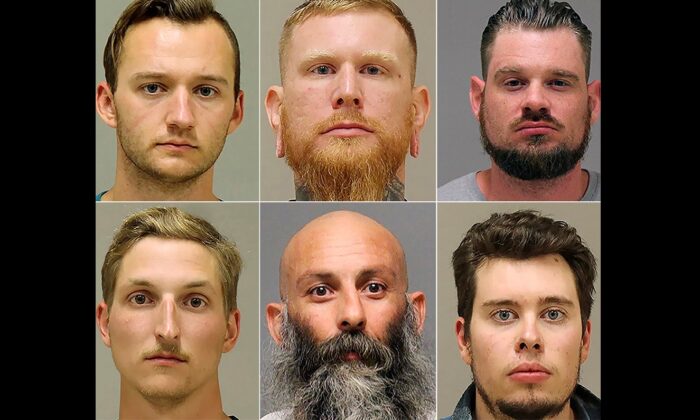 GRAND RAPIDS, Michigan–The trial of four men accused of plotting to kidnap Michigan’s governor started March 8, with the parties making their way through a list of more than 200 potential jurors.

Two of the initial codefendants, Ty Garbin and Kaleb Franks, switched their pleas to guilty and will cooperate with the government in the trial.

The federal trial is separate from a state case involving defendants Joseph Morrison, Pete Musico, and Paul Bellar, who are accused of providing material support to the kidnap plotters. Their trial is set to begin in September.

With at least 12 undercover FBI informants or agents involved in the group, the defendants claim they were entrapped by federal law enforcement.

U.S. District Judge Robert Jonker started the trial March 8 by noting that the case will likely last up to six weeks because of its complex and politically charged nature.

“This isn’t your average criminal case,” he said.

Accordingly, the court selected a pool of more than 200 candidates from all around western Michigan. Some of those potential jurors waited in an overflow area separate from the main courtroom, while members of the press covered the proceedings via video feed from a floor above.

Several were excused for logistical reasons. For example, one person said English is his second language, while another was still recovering from lung issues associated with COVID-19.

Jonker questioned the remaining candidates about their political views, probing whether they’d be biased in the case.

“I don’t care too much for the governor,” said one man.

Judge Jonker asked the man whether his views would prejudice him as a juror.

“I’d probably be pretty biased, yes,” the man replied before getting excused by Jonker.

Similarly, another man was excused after revealing that he had “personal issues with the governor.”

A third man said he has “strong opinions against the government,” but said he’d “do my best” to make sure he’s not biased.

Two others revealed biases in favor of government. One man said he’s watched a lot of news coverage about the case.

One woman said she has a cousin in the FBI, and that she’s prejudiced against the defendants. She also said she’s a fan of Whitmer.

Meanwhile, a man who identified himself as a glass blower and marijuana farmer said he had an “undisclosed bias.”

Judge Jonker excused the first two men who said they don’t like Whitmer, but broke for lunch and had yet to rule on the others before this article’s publication. Jonker said the jury selection could take a full two days.