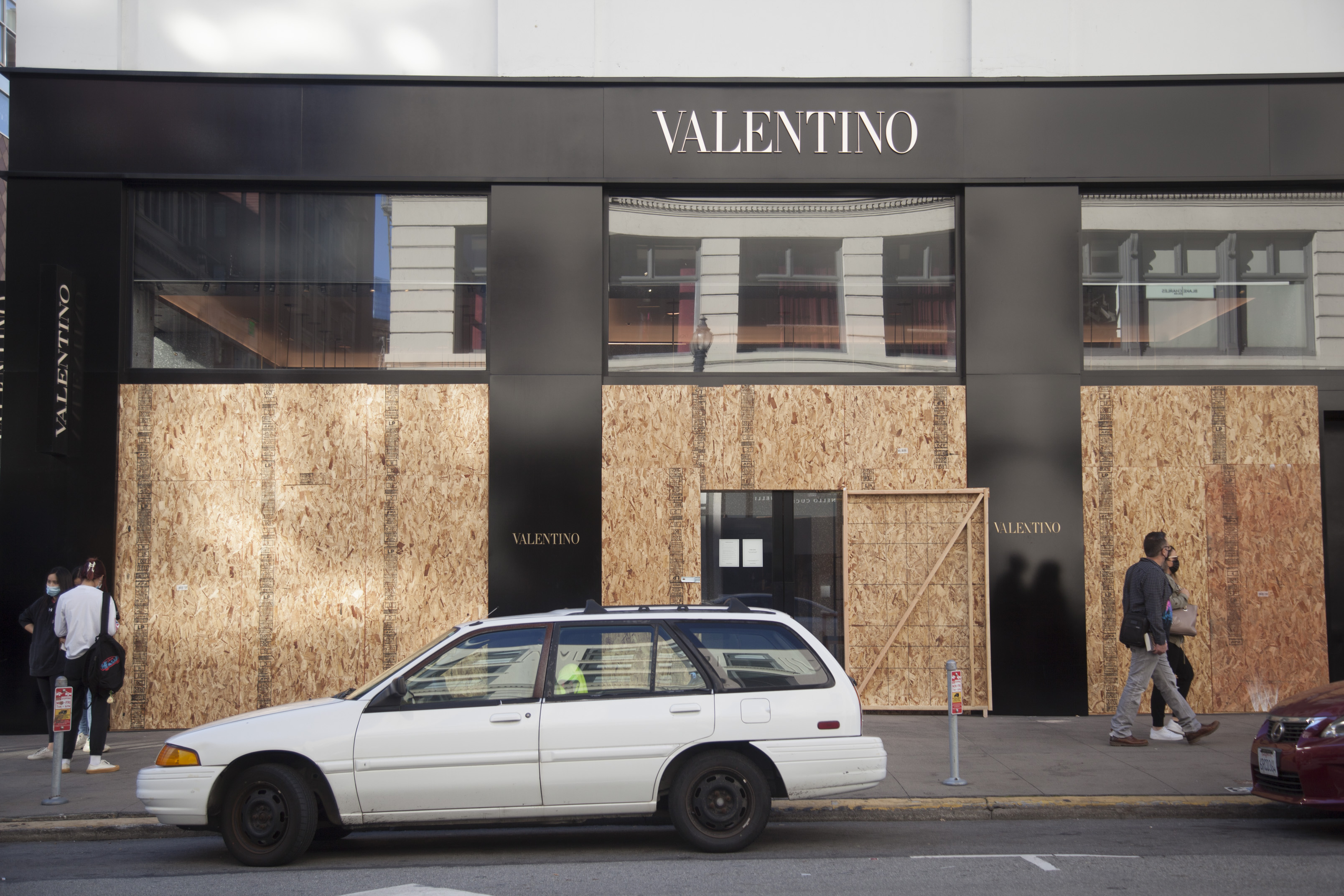 Lululemon in San Jose’s Santana Row is the latest victim of smash-and-grab. Police informed NTD Television that a group of suspects entered the store at around 6:30 p.m. on Nov. 21. y got away with the merchandise before police could arrive. investigation is still ongoing.

Jeffrey Grant, a security specialist from All City Patrol Services, was present at the scene.

“I saw a couple girls out here by the flowers recording the traffic. So I was thinking that maybe they were doing a recon for another mob hit over here. And then about an hour later, about 6:25, 6:30 p.m., I saw two girls dart from across the street over here and then they dashed through here into Lululemon,” Grant told NTD Television.

Grant is a security guard for another store nearby. After he told his store to lock up and close, he headed over to Lululemon. By the time he got there, he said eight people darted out of the store across the street to a getaway car.

“y dropped some merchandise, so I was able to recover some of it and bring it back to the store and then I made sure that they were OK because sometimes these gangs sometimes attack the store clerks,” Grant said.

Earlier that same night, a group of looters hit Southland Mall in Hayward at 5:30 p.m., breaking into Sam’s Jewelers. suspects ran off with stolen goods and fled in getaway cars.

As a spokesperson for Sam’s Jewelers was cleaning his store, he informed NTD the thieves took men’s diamond rings, gold rings, and gold gems. He said there were 8–10 people involved. y estimate a loss of $50,000–$70,000.

re were reports of Macy’s getting ransacked too, but a spokesperson confirmed that the store was not impacted.

Cassondra Fovel, a public information officer for the Hayward Police Department also confirmed with Pezou that they did not receive calls from Macy’s related to this incident.

“Approximately nine subjects went into the store [Sam’s Jewelers], smashed the glass casings with hammers, and took an unknown amount of jewelry from the casings, and then fled the scene,” Fovel said. “y had two different vehicles that they fled in.”

On Nov. 20 at 9:00 p.m., about 80 robbers entered a Nordstrom store at Broadway Plaza in Walnut Creek. Police reported that two employees were assaulted and one was pepper-sprayed. Three arrests were made.

On Nov. 20 at around 7:40 p.m., a large group of robbers stole from Wellspring Pharmacy in Oakland.

On Nov. 19, the Louis Vuitton in San Francisco’s Union Square was robbed.

On Nov. 16, thieves broke into Long Boat Jewelry in San Francisco’s Chinatown, making off with about $250,000 in merchandise.

“It’s horrible because it’s either forcing stores to go out of business, putting people out of jobs, or they’re going to have to cut into their profits and hire extra security. I personally would like to see a lot of these retail operations have more aggressive procedures. But it just seems that that’s not the way people want to be these days,” Grant said.

Jason Brewer, executive vice president of communications at Retail Industry Leaders Association, told NTD the rise in organized retail crime is nationwide. A lot of the stolen goods are sold online, he added.

“Unfortunately, it’s become very easy to build a business model selling stolen goods online. And we’ve got to have better transparency in a lot of these online marketplaces, Amazon and Facebook. So you can’t hide behind a fake screen name and sell stolen products. Right now, it’s too easy to sell a stolen product online and that’s what’s driving a lot of this theft,” Brewer said.

During a press conference on Nov. 22, Gov. Gavin Newsom said he intends to partner more closely with cities and counties to address the smash-and-grab crimes.

“We’ll be stepping up those efforts in next year’s budget substantially. And we’ve been working with cities up and down the state including San Francisco, Walnut Creek, and others that were impacted over this weekend by these organized retail theft operations,” Newsom said.

Police urged Bay Area customers to be aware of their surroundings when shopping.

“If you do have items that you’ve purchased at malls or shopping centers, [make sure] that you’re not storing them in your car where anybody else can see them. Unfortunately, this is the time of year where we see thefts of all kinds go up,” Fovel said.