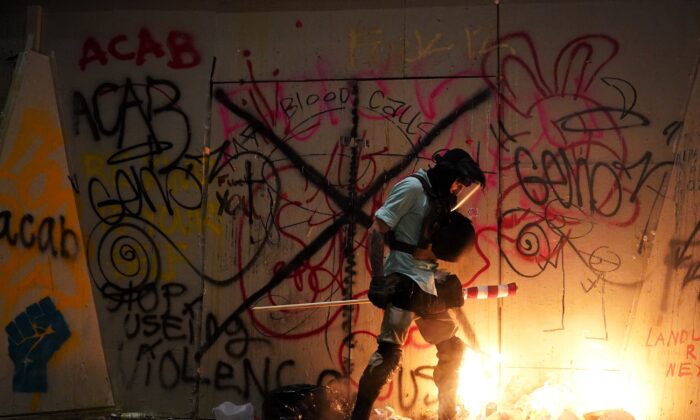 Right-wing extremists were responsible for 66 percent of the 110 domestic terrorism plots or attacks committed in 2020, according to data presented to an Oct. 13 congressional hearing—but the study doesn’t include most of the roughly 450 violent protests from that year.

Data on domestic terrorism was presented on Oct. 13 at a House Committee on Veterans’ Affairs hearing on extremist groups recruiting veterans. hearing is the first in a three-part investigation on what role military veterans might play in such activities.

Some members of Congress, the FBI, and the Department of Homeland Security have deemed domestic extremism as the greatest threat to the homeland, although they have yet to produce comprehensive data supporting that claim.

Center for Strategic & International Studies Director Seth Jones said during testimony that violent far-right extremists were responsible for 66 percent of the 110 domestic terrorist attacks and plots in 2020. Of these, active-duty military personnel took part in seven attacks or plots, Jones told committee members.

Citing his April CSIS paper on domestic terrorism, Jones said 23 percent of the terrorist plots or attacks in 2020 were perpetrated by far-left groups, while those inspired by Salafi-jihadist ideology fell to 5 percent.

However, Jones didn’t share with the panel that his study omits nearly all of the roughly 450 violent protests from 2020.

“re were approximately 450 violent protests between May and August 2020,” the report’s section on methodology states. “Yet [CSIS] only verified 12 incidents of far-left terrorism during that period, since most of the violence did not meet the definition of terrorism.”

“For inclusion in the data set, events had to meet all parts of this definition,” the report stated. “[CSIS] did not seek to address other issues, such as hate crimes, protests, riots, or broader civil unrest.”

CSIS also stated it verified that 11 of more than 100 “vehicle attacks at protests” were far-right terrorist attacks. Investigations have found that some of the attacks were politically motivated, although many were due to drivers being frightened or enraged when surrounded by protesters.

Along with providing data for 2020, Jones told the committee that military veterans were involved in 10 percent of the terrorism plots or attacks from 2015 to 2020. Veterans comprise about 7 percent of the adult population, according to Pew Research.

Jones added that at least 66 veterans were involved in the Jan. 6 Capitol breach.

At the hearing, Jones and others used the events of Jan. 6 to illustrate the growing threat of veterans joining extremist causes.

“From Oklahoma City in 1994, to Fort Hood in 2009, to Thousand Oaks, California, in 2018, and even the assault on our own United States Capitol in January, misguided individuals have committed violence against their fellow citizens in pursuit of distorted objectives,” said committee Chairman Mark Takano (D-Calif.).

“This is a real threat to our nation and to our democracy—and directly impacts the work of our Committee, as an alarming number of these individuals have served our country in the Armed Forces.”

But other committee members criticized the hearing for pathologizing and stigmatizing all veterans for the actions of a few.

Rep. Jake Ellzey (R-Texas), a former Navy officer, pointed out that there are more than 18 million veterans in the United States.

“And yet, the entire veteran community is painted with a broad brush—and while the [Jan. 6] investigation is still ongoing,” he said. “ investigation is not over, and the legal rights of those involved have not been addressed appropriately.”

“Having a militia is a protected right under the Second Amendment of the Constitution,” he said. “re are incredible numbers of militias within my district, and I’m proud to say that these are people who want to safeguard our liberty in case we ever have a tyrannical government.”

Rep. Nancy Mace (R-S.C.), meanwhile, criticized the FBI for not tracking Antifa-related violent crimes, while Rep. Matt Rosendale (R-Mont.) stated that the hearing would have a chilling effect on veterans’ free speech rights.

“I am deeply concerned this will have a chilling effect of silencing veterans from engaging in political speech, in effect depriving them of the very rights they fought to defend,” Rosendale said. “We saw just last week the DOJ weaponized against concerned parents who take their time to voice their concerns at school board meetings.”

Rep. Jim Banks (R-Ind.) said the hearing is a distraction from more important issues, such as rising veteran suicide rates. He said he hopes veterans watched the Oct. 13 hearing so they can see what their government thinks of them.

“I hope every veteran in America is watching this hearing today, and hearing from the majority party in control that our veterans are so stupid and susceptible into becoming domestic terrorists, that the Democrats have to save them from it,” he said. “It’s wildly offensive and dangerous.”