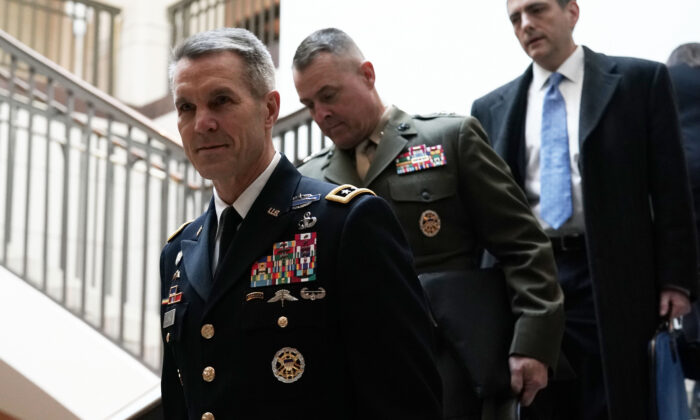 head of U.S. Special Operations Command (USSOCOM) said on Nov. 19 that the ISIS-K terrorist threat in Afghanistan “still exists” and he doesn’t believe the United States can rely upon the Taliban’s newly formed government as a partner against this threat.

“I don’t see them as a partner,” USSOCOM Gen. Richard Clarke said of the Taliban terrorist group, pointing out that there still remains an ISIS threat across regions in Afghanistan and it is growing, Defense One reported.

Clarke made the remark during an appearance at the Halifax International Security Forum in Canada on Nov. 19, urging the United States to continue working with Afghans and foreign nationals on the ground.

Clarke also noted that “over the horizon” operations, which are designed to eliminate potential threats from great distances, have become more difficult without troops on the ground.

During an Aug. 31 speech from the White House, President Joe Biden told the American public that the United States does not need a physical presence in Afghanistan to keep Americans safe from terrorists.

“It’s going to be harder. Anytime you have a physical presence on the ground it stimulates the enemy forces. You see and sense with partner forces,” he said in reference to the reduction of troops on the ground.

A political spokesperson for the Taliban said in October that they are able to control threats from ISIS, the terrorist group that is responsible for a series of deadly attacks in the country during and following the conclusion of the 20-year war at the end of August and the withdrawal of U.S. forces.

ISIS, an enemy of the Taliban, has claimed responsibility for a number of attacks, including the Aug. 26 Kabul Airport bomb attack that killed 13 U.S. service members and the Oct. 8 suicide bombing that killed 46 minority Shiite Muslims. Washington considers ISIS its greatest terrorist threat emanating from Afghanistan.

Clarke said he doesn’t see the Taliban as a potential partner in the fight against the ISIS affiliate.

“I don’t see it,” he told the forum. “I don’t think they should be considered today … as a counterterrorism partner.”