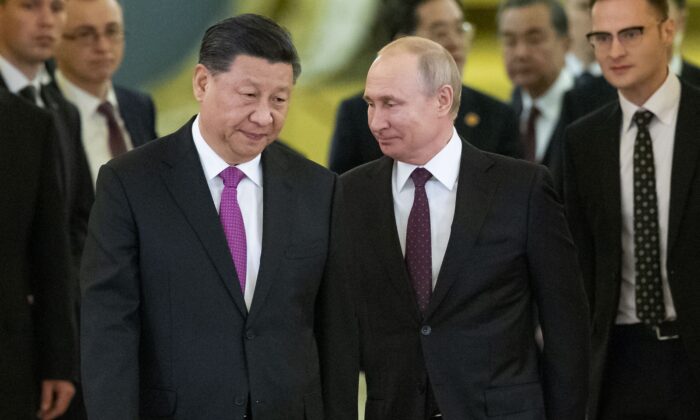 NEW DELHI—Putin’s invasion of Ukraine has intensified factional conflicts within the Chinese Communist Party as maneuvering for influence gathers pace ahead of an important Party meeting later this year, according to sinologists.

Over the past days, the Chinese communist leadership gathered in Beijing for its annual “Two Sessions” meetings of the regime’s rubber-stamp legislature and top political advisory body. The meetings brought together more than 5,000 of the country’s political, business, and social elite, tasked to approve the Party’s policy priorities for the coming year, but the event was overshadowed by Russia’s invasion of Ukraine.

The annual meetings are also the last before the CCP convenes its twice-in-a-decade National Party Congress this fall, where Chinese leader Xi Jinping is expected to make an unprecedented bid for a third term in power.

“The CCP congresses do generally attract high-intensity factional struggles, but in the background of the Russian invasion of Ukraine, China’s nationalists, globalists, militarists, conservatives, liberals, and others are all fanning out to mobilize influence in favor of their own factions,” said Kondapalli.

Though China is a one-party state and the CCP monopolizes power, the Party leadership is not a unitary group and members differ in their ideology, political associations, socio-economic background, and policy preferences.

According to Frank Lehberger, a Germany-based Sinologist, “factional wars” have been going on inside the CCP for decades and their complexity surpasses what most experts can express. The tumultuous Cultural Revolution during the 1970s to 1980s, for instance, saw particularly heavy infighting, resulting in many high-ranked CCP members being purged.

Two waring fractions have long existed within the CCP—The Shanghai Gang and the Chinese Communist Youth League. A third that started from within the Shanghai Gang and eventually took over most of the key leadership posts in the Party and the central administration, as well as the provincial level, is the faction led by Xi Jinping, according to a 2021 research paper published in Observer Research Foundation.

Scores of current and former officials have been purged over the years, as part of an effort by Xi to eliminate the influence of factions that have undermined his authority since he assumed office in 2012, analysts say.

In recent years, several former senior members of the public security apparatus tied to Jiang’s faction have been targeted by the campaign.

One report dated Feb. 4 about India’s last-minute diplomatic boycott of the Beijing Olympics was critical of Xi. Another report from Jan. 19 entitled “An objective evaluation of Xi Jinping” was also highly critical of Xi’s tenure, according to Kondapalli.

Given the extremely tight censorship environment in China, content that strays from official narratives or is critical of the regime or certain officials may only be allowed to disseminate if there is backing from powerful figures within the Party. Thus analysts have noted such coverage has been used by Party factions to undermine their political rivals.

These two reports coupled with the spate of high-profile purges of former high-level officials “have exposed fissures in the CCP,” said Kondapalli.

According to Lehberger, Xi wants to stick with Putin whereas Jiang’s fraction doesn’t want China to be closely tied up with the Russian leader.

Media reports criticizing Xi’s policy decisions, however, are just one minor component among many complex moving parts in the CCP’s factional warfare, according to Lehberger.

“More serious ones are assassination attempts of Xi, and silencing, imprisoning, or death sentencing (on bogus charges) of prominent members or minor stooges of the other factions,” he said.

Outside of the Ukraine crisis, Xi is already under huge pressure due to various domestic and international problems, Kondapalli said. These include the pandemic’s ongoing impact on China’s economy, trade and technology restrictions imposed by the United States, and growing international scrutiny over the CCP’s rights abuses in Xinjiang, Tibet, and Hong Kong.

“Xi has been stressing during the NPC Congress food safety for the third time in 2-3 months … [this] usually this means that famine is not far away,” Lehberger said.

Meanwhile, developments in Ukraine have presented the regime with both challenges and opportunities, the sinologist noted.

On the first day of Russia’s invasion, China lifted all wheat import restrictions on Russia, as Western nations imposed swift economic sanctions on Moscow. Lehberger characterized this an opportunistic move for China seeking to acquire Russian commodities on the cheap while tackling food shortage issues domestically.

Yet, the West’s vigorous response to Putin’s aggression has also served as a warning for Beijing.

The CCP is actually surprised by the ferocity with which western sanctions are ruining Russia,  said Kondapalli. As a result, while Beijing has condemned the West for the sanctions, it has offered no substantial help to Putin.

“It must have given pause to any temptation to invade Taiwan. As a highly globalized economy, China cannot afford to attract similar sanctions, which could stall Beijing’s further rise,” said Kondapalli.

Chinese institutions so far appear to be adhering to Western sanctions. Two China-backed infrastructure banks, the Asian Infrastructure Investment Bank and the New Development Bank, have halted lending to Russia.

Factional wars within the CCP over how it deals with Russia are as old as Soviet Union’s relationship with the Party itself, which goes back a century. The Soviets helped create the CCP in 1921 and supported the Party for decades.

According to Kondapalli, any matters concerning Russia have tended to spark acute disagreements within the CCP.

“Much of it had to do with the love-hate relationship between the Soviet and Chinese Communist parties, their ideological agreements and differences,” said Kondapalli, adding that in the early days the Soviets had wanted to keep CCP under their thumb.

“The CCP took the Soviets’ help but resented their bid to control it.”

After the CCP seized power over the country, it adopted the Soviet model of development and used Moscow’s help in its campaign modernize its industries during the 1950s.

But the cooperation with the USSR didn’t last as communist powers famously had a falling out not long after. In the following decades, many CCP officials would be targeted for removal on the basis of real or imagined ties to Moscow.

“The CCP also threw out Defence Minister Peng Dehuai in 1959 for being close to Moscow. Senior politburo member Liu Shaoqi was accused of being a ‘Chinese Khrushchev’ and paraded on the streets [in the late 1960s]. In 1989, Zhao Ziyang, the party General Secretary, was accused of being the ‘Chinese Gorbachev’ for siding with students in the Tiananmen Square protests,” said Kondapalli.

However, after becoming the Party’s paramount leader in 2012, Xi Jinping made his first foreign visit to Moscow, during which the Kremlin gave him a peek into its most secretive military command and control center, he said.

China’s ties with Russia today are “semi-alliance” in nature, according to Kondapalli, finding its foundation in various agreements signed over the past few decades, including the 2001 Sino-Russian Treaty of Friendship. Most recently, Xi and Putin met in Beijing on the opening day of the Winter Olympics, during which the two announced a “no limits” partnership.

But as Putin’s invasion triggers a widening global backlash, the CCP and its political factions find themselves wrestling with how to manage the fallout.

Russia is now crippled by the international financial and trade sanctions, and China’s economy will be deeply impacted if Xi ties itself too closely with Putin, according to Lehberger.

“Jiang and a few others do not want China to be tied too closely to Putin. Because Putin could now sink China together with him,” he said.