Tijuana: A Home Away From Home for Economic Refugees 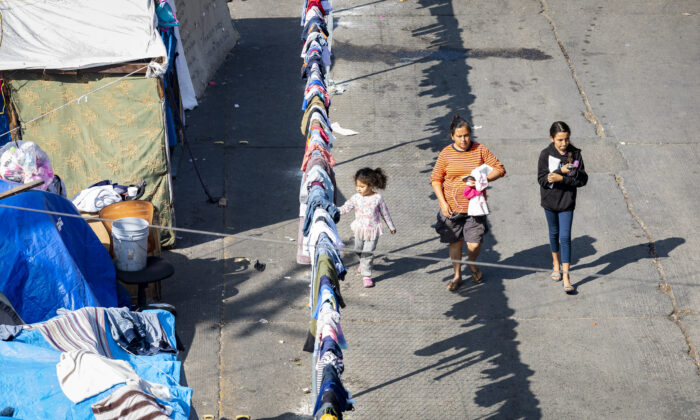 TIJUANA, Mexico—Since May, the tent city of Tijuana’s  El Chaparral area has been filled with an added population of South American travelers in hopes of seeking a new life across the border in the United States—less than 1000 feet from where they sleep.

At 10:00 am on a recent Saturday, a Mariachi band played worship music within the now fenced-off perimeter guarded by municipal and federal Mexican police forces. air had a stench of portable toilets mixed with smoke coming from late morning meals.

Hondurans, Guatemalans, and Haitians are just some of the mixed migrant groups living together within the encampment.

Just two blocks away, a man with headphones sat next to a cat near the Nativo Coffee Community coffee shop.

“ situation can be described as chaotic. Criminal activity is threatening families, and the political unrest is causing suffering and limiting opportunities to work.”

When Fritznel arrived in Mexico six months ago with a temporary visa, his original mission was to work within furniture factories around the state of Chihuahua in order to send money home to family members in Haiti that live near the capital of Port-au-Prince.

“I worked on an assembly line connecting pieces of furniture together,” he said.

“It is such a blessing to send money home to my family.”

One day while working, Fritznel was contacted by a Haitian pastor in the Tijuana area. He asked Fritznel to come and lead the Haitian church there, which currently has 80-100 members.

“Though I would be making more money in Chihuahua working the same job as I would be in Tijuana, God led me to accept,” Fritznel said.

“To labor in God’s works more is more important and has more priority in my life.”

Since moving to Tijuana three months ago to answer the calling of pastoring fellow Haitian churchgoers living and working in the border town, Fritznel has noticed a revival amongst his peers that he felt worthy of sharing.

“People back home were timid and did not have a strong belief in God,” he said.

“But during the people’s migration to Mexico, I am now seeing more of a clinging to God. God’s hands are behind this, and I am encouraged as a pastor here.”

tall 28-year-old was enjoying a short break from his normal 10-hours shifts as a ride-share driver.

“Given the chance, I think every Haitian would want to leave right now,” Elisé said.

“My family has reported consistent criminal activity in my city, and it is on the rise.”

Elisé’s journey to Tijuana started after he left Haiti for the nation of Chile, where Haitians are granted passage that do not require pre-applied visas.

By bus, Elisé, his uncle, and two cousins traveled across 11 countries, until they eventually ended up in Tijuana—but not after plenty of challenges along the way.

“ trip gets dangerous and expensive,” he said.

“re are check points where you are required to pay money to cross through. se are not run by government officials, but by townsfolk who have weapons.”

Elisé, whose family in Haiti helped pay for his bus travel, was often subject to extortionary practices by the men organizing his passage to the U.S. border. On several occasions he and other Haitian migrants had to pay four times the amount originally agreed upon to get from one city to the next.

“Panama was probably the worst of the experience due to the fees and criminals,” he said.

“But my experience cannot be considered terrible; I made it to Mexico and am blessed to work as a Uber driver. Life here is going well for me.”

In Tijuana where many Haitians are attempting passage for a new life in the United States, one city resident noted that this is the second major wave he has witnessed since living in the city.

Stan Lee, a missionary from South Korea with RTC Ministries, recalled that he first saw migrant caravans living homeless along the Tijuana streets before the encampments at El Chapparal were organized by Mexican officials.

“I first noticed the caravans arriving to Tijuana about four years ago,” Lee said.

“And the situation has been constantly changing. re are different reasons for these caravans happening, but most are in search of a better life.”

Using part of his ministry time to serve the migrants, Lee encourages local churches to help those who seek to move past donations and handouts, saying there are opportunities to serve all day long.

“Getting familiar with what is going on can only help the serving aspect of ministry here.”

After buying Fritznel and Elisé coffees, he joyfully patted them on the back. ir masks could not hide the smiles they had in experiencing hospitality so far from home.

Haiti is currently the poorest nation in the Western Hemisphere, with nearly 60 percent of its citizens living below the poverty line.

country went into further despair after the assassination of Haiti’s former President Jovenel Moise on July 7, 2021.

Natural disasters and armed militias continue to leave the nation in a state of peril that prompted Fritznel and Elisé to flee to Mexico to work and send what they earn to their families struggling to survive at home.

“I would like to stay in Tijuana, but the future is uncertain for me,” Elisé said.

With Tijuana ranked as one of the most dangerous cities in the world, the two men look beyond the statistics and feel commissioned by a higher power to honor the opportunities put before them.

“He will cover you with his feathers and under his wings you will find refuge,” Fritznel quoted from one of his favorite verses in the Bible.

“His faithfulness will be your shield and rampart.”

“This is a time of growth for the Haitians, and I am encouraged by what God has shared in that scripture,” he added.

Pezou : Tijuana: A Home Away From Home for Economic Refugees