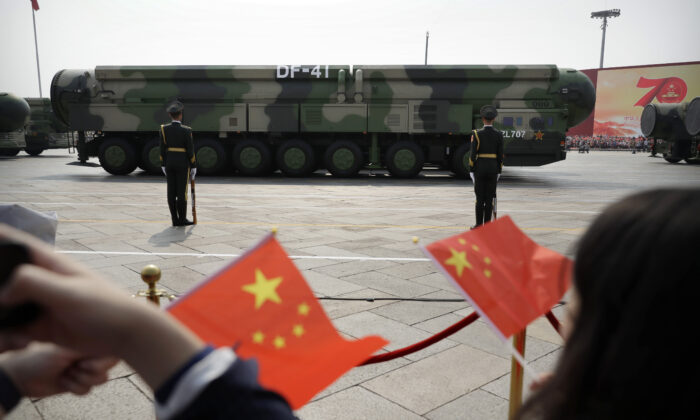 According to U.S. Space Operations Vice Chief David Thompson, U.S. hypersonic weapons are currently “not as advanced” as those of China and Russia but that it is an area the navy and the air force is “working on.”

At the Halifax International Security Forum in Canada on Nov. 20, Thompson acknowledged that Russia and China being ahead of the United States in hypersonic missile development complicates the “principle of strategic warning” because it makes it difficult to pinpoint the target of the missile and activate warning systems.

“Combine that with a fractional orbital bombardment system, [the missile] can go around the world then hit you,” said Thompson. “Even if you can track that maneuvering weapon … you still don’t know the target until the last minute because it maneuvers all the way.”

Regarding why the United States is lagging behind in hypersonic weapon development, Thompson listed a multitude of reasons, including the “bureaucracy” built into the defense system; the fact that the the United States has not had a “strategic competitor” in decades that has driven us to move “quickly;” and our development of an “extreme risk-adverse posture” when developing defense technologies due to cost.

He said that the United States needs to be in a position to “accept a little more risk of failure so that we can speed up our processes,” and “adopt a different approach to acquiring, fielding and operating systems” to accelerate cycle times.

In a Oct. 17 report by the Financial Pezou, the Chinese military was described as having “launched a rocket that carried a hypersonic glide vehicle which flew through low-orbit space before cruising down towards its target” in August this year.

According to the Pentagon, the three successful tests “demonstrated advanced hypersonic technologies, capabilities, and prototype systems in a realistic operating environment.”

“Experiments and tests both successful and unsuccessful are the backbone of developing highly complex critical technologies at tremendous speed, as the department is doing with hypersonic technologies,” a Pentagon Spokesman told Defense News in a statement.

Air Force Secretary Frank Kendall said on Sep. 23 that “the service has not laid out in enough detail which missions will call for the use of hypersonic weapons, how to fit them into operations and whether the technologies in development will allow the service to accomplish its goals” according to statements obtained by the outlet.

“ target set that we would want to address, and why hypersonics are the most cost effective weapons for the U.S., I think it’s still to me somewhat of a question mark,” Kendall told reporters at the Air, Space and Cyber conference. “I haven’t seen all the analysis that’s been done to justify the current program.”