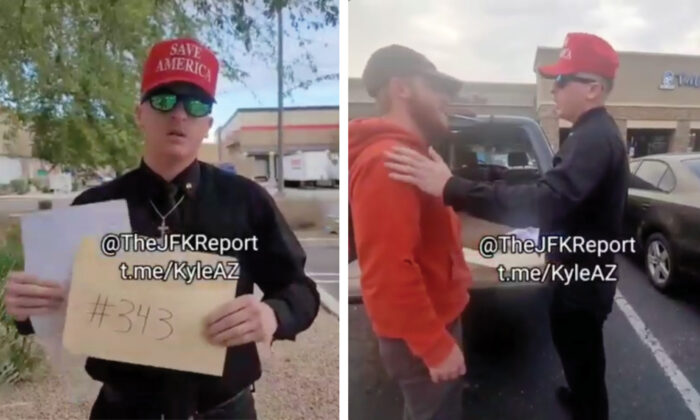 Although Micajah Joel Jackson was in federal court Thursday to be sentenced on one count of parading, picketing, or demonstrating at the U.S. Capitol on Jan. 6, 2021, much of the hearing was dominated by discussion of his social media activity and the political content of his postings.

Jackson, 26, of Phoenix, was set to be sentenced in Washington D.C. as part of a plea deal with federal prosecutors, who are especially upset with his prolific postings on Twitter and other social-media outlets. The parading charge is a petty misdemeanor that carries a possible six-month jail sentence. Prosecutors sought 60 days in jail (pdf), while the defense argued (pdf) for 60 days of home detention.

The U.S. Marine Corps veteran was accused of being near some of the rioting at the U.S. Capitol, shouting “oath breakers” at police, and spending about 30 minutes walking through the building. Prosecutors repeatedly cited Jackson’s interviews and posts on video podcasts, Twitter, and other social-media outlets, and his propagation of alleged misinformation.

The sentencing was adjourned until March 24 to allow defense attorney Maria Jacob to provide more information to the court on why she believes Jackson cannot be sentenced to incarceration and probation on a petty misdemeanor.

Prosecutor Sean P. Murphy criticized Jackson’s “false-flag conspiracy theories,” his comments that “we will not concede” the 2020 presidential election, and a March 8 interview with Alex Sheppard of Red Voice Media as proof Jackson has no remorse for the charge on which he was convicted.

“Since the government filed its sentencing memorandum, the number of posts on the defendant’s Twitter account has gone up by nearly 2,000,” Murphy told U.S. District Judge Randolph D. Moss.

When discussing Jackson’s interview with Sheppard, Murphy said, “I hate to give public voice to them, because unfortunately sometimes this just ends up drawing more people.”

“I didn’t have time to watch the whole thing, but he appeared to go line by line through the government’s sentencing memorandum and talking about why he’s being politically persecuted, why this is a psy-op and why the FBI is out to get him,” Murphy said.

“It’s only after this January 6th notoriety that he’s been able to build that brand of false-flag conspiracy theories,” Murphy said.

Murphy submitted an undated photograph believed to be from before Jan. 6 showing Jackson “wearing a USA hat and what appear to be boxer shorts with AK-style rifles on them” while aiming “what appears to be a firearm or a replica of a firearm” while taking a “mirror-style selfie.”

On Jan. 6, Jackson wore “what appeared to be a carefully curated outfit,” Murphy said.

“He has the bright yellow gloves; yellow of course being one of the colors of the Proud Boys,” Murphy said. Jackson said he is not a member of the Proud Boys, but did walk alongside some of them on the way from President Donald J. Trump’s speech to the Capitol on Jan. 6. Jackson also wore an orange armband.

“There is severe danger in misinformation,” Murphy said. “Misinformation often does go viral that’s very dangerous, with very dangerous effects—none of which the defendant seems to be considering when he opens his mouth and spreads these statements.”

Murphy cited comments from several federal judges in the District of Columbia Circuit who said defendants’ statements and posts on social media were aggravating factors that weighed in favor of jail time.

Murphy cited a Jan. 24 interview Jackson did with Vicky Richter in which he called Jan. 6 the “American Psyop” with police inciting crowds by attacking protesters with pepper spray and steel batons.

“Nothing he has said has seemed humble or apologetic,” Murphy said.

“I do believe that in order to promote respect for the law and reflect the seriousness of the offense, the government’s requested a sentence of a 60-day term of incarceration followed by 36 months of probation is sufficient but not greater than necessary.”

He said Jackson “has done nothing in particular to back down or attempt to heal that damage that he caused on that day through his insistence on digging his fingers into the wound and continuing to rip it apart.”

Jacob said while prosecutors tried to strike a balance between their recommended sentence and what they see as a lack of remorse, “I think at times they crossed the line.”

Jackson has admitted regret for some of the things he said and posted on social media, but the majority of his social media posts since Jan. 6 “do not have bearing, do not have any bearing on his conduct on January 6th or his acceptance of responsibility in this case,” Jacob said.

She referred to the government’s sentencing memo that talked about Jackson’s belief that the 2020 presidential election was stolen. “I’m just failing to understand the relevance of that belief in regards to an appropriate punishment here.”

Judge Moss said statements that police waved protesters into the Capitol on Jan. 6, and that the prosecution “is some type of political vendetta against him and others” leaves him thinking “that Mr. Jackson is not sincere.”

Jacob said many people involved “have had these beliefs that they’re entitled to have, that the election was stolen.” Jackson regrets his presence at the Capitol, but he did not take part in any of the violence, she said.

“The government has still not identified why his actions on January 6th warrant a 60-day jail sentence,” she said. “That is a significant sentence. I don’t think it is supported by past cases, past sentences that have been imposed.”

The U.S. Probation Office said Jackson is not a danger to the community, and has complied with the pre-trial release conditions, Jacob said. More than 30 days in jail or confinement in a halfway house would cause Jackson to lose his Veterans Administration benefits, she said, and require a “very long and arduous process” to get them back.

Murphy said “well-established Supreme Court precedent” holds that the First Amendment “does not prohibit the evidentiary use of speech to prove elements of the crime or to prove motive or intent.” He stressed that the Department of Justice offered the examples from Jackson’s social media only for that purpose.

Jackson is well known for a video of his discussion with a man in Arizona that he suspects of being a government informant who carried a handgun on Capitol grounds on Jan. 6. Luke P. Robinson was originally listed as No. 343 on the FBI’s Jan. 6 most-wanted page, but his photograph was later scrubbed from the site. As of March 10, his photo is still missing from the FBI site. He has not been arrested or charged for being at the Capitol or for allegedly carrying a weapon.

“Why were you removed from 343 on the FBI wanted list?” Jackson asked Robinson, who replied, “I don’t know.”

“You had a firearm on federal property. That’s serious stuff,” Jackson said, pointing to a photo of the pistol. “I got charged with a misdemeanor for parading and picketing. That’s a firearm, man.” Jackson said he originally met Robinson 10 days after the FBI visited Jackson’s house regarding Jan. 6.

A page on the Sedition Hunters website nicknamed Robinson #GingerGun. It shows a closeup photo of a waistband with what online sleuths identified as a tan Sig Sauer P320 9mm handgun. He also appeared to be wearing an earpiece in his left ear, according to a Sedition Hunters photo.

“Are you cooperating with the FBI?” Clifton asked.