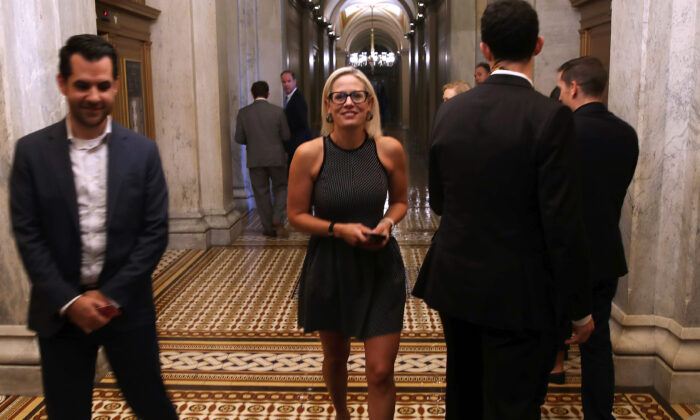 Sen. Kyrsten Sinema (D-Ariz.) on Monday issued a lengthy statement condemning the actions of left-wing protesters who followed the senator inside a women’s bathroom and recorded her while making demands.

“Several individuals disrupted my class in Arizona State University,” Sinema said, adding that “these individuals filmed and publicly posted videos of my students without their permission—including footage taken of both my students and I using the restroom.”

While Sinema said that she respects the right to demonstrate, the activist group’s behavior on Sunday in Phoenix “was not legitimate protest,” adding: “It is unacceptable for activist organizations to instruct their members to jeopardize themselves by engaging in unlawful activities such as gaining entry to closed university buildings, disrupting learning environments, and filming students in the restroom.”

Under Arizona state law, it’s illegal to film people while they’re in the bathroom.  Pezou has contacted Sinema’s office about whether the senator will press charges.

Sgt. Vincent Cole, a spokesman for the Phoenix Police Department, indicated that the agency would not be pursuing charges.

“Arizona State University has their own Police Department and are the investigating agency for this incident,” he told Pezou via email.

According to video footage posted online, apparent immigration activists followed Sinema into a bathroom at Arizona State University and called on her to pass the mammoth $3.5 trillion budget reconciliation bill that has been locked in negotiations.

“We knocked on doors for you,” the unnamed person filming told Sinema while she was in a bathroom stall. Sinema ignored the people and she washed her hands before walking inside the classroom as activists chanted: “Build back better, back the bill!” individual who was filming, who called herself Blanca, also told the freshman Arizona senator that “we need this pathway to citizenship.”

“We wouldn’t have to resort to confronting” Sinema, wrote LUCHA in a Twitter post, “if she took meetings with the communities that elected her.”

According to the group’s website, Living United for Change in Arizona is “a membership-led, grassroots organization that builds power with Arizona’s working families to advance social, racial and economic justice for all.”

Former Trump administration adviser Stephen Miller wrote on Twitter that “an illegal alien is stalking a US Senator to demand passage of Biden’s reconciliation bill b/c it includes mass amnesty for illegals. In a functioning democracy, ICE would swiftly deport this person, but under Biden’s new edict (as the lawbreaker knows) she’s immune from removal.”

After a White House speech on Monday, President Joe Biden responded to a question about the harassment incident, saying that  it’s “part of the process” for anyone who “doesn’t have secret service protection.”

Another moderate Democrat, Sen. Joe Manchin (D-W.Va.), has also faced left-wing pressure over the budget reconciliation bill. A group of kayakers was seen approaching Manchin’s houseboat in Washington D.C. before yelling a the senator.

“How much do you think that we spend on non-discretionary, basically non-defense? Just as much,” Manchin said in response.

Asked about what happened to Sinema and Manchin, President Joe Biden on Monday told reporters in Washington, “I don’t think they’re appropriate tactics but it happens to everybody.”

“ only people it doesn’t happen to is people who have Secret Service standing around. So it’s part of the process,” he added.