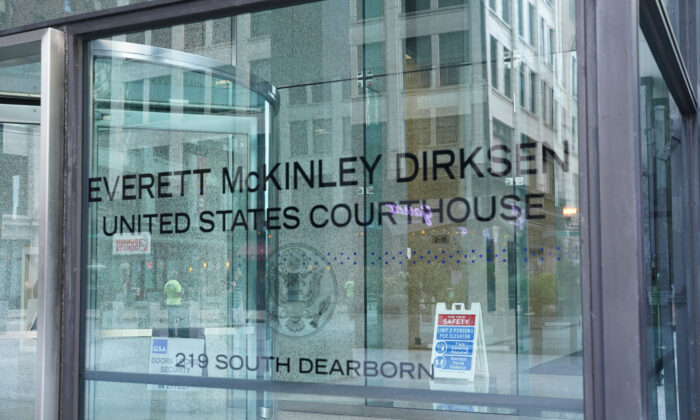 CHICAGO—Sammie Booker, sitting on the witness stand, revealed to jurors that he had robbed and extorted scores of drug dealers, killed three people, and aided at least two other murders as an underling of the Four Corner Hustlers gang on the West Side of Chicago in the past two decades.

And more importantly, he said, he did so at the orders of his former boss Labar Spann, the lone defender in the trial.

Booker’s testimony, which lasted three days this week, is a key move by the federal prosecutors to prove Spann’s alleged racketeering activities over two decades under the Racketeer Influenced and Corrupt Organizations Act (RICO). If found guilty by the jury, Spann faces up to life in prison.

attorney defending Spann, Steven Shobat, rose to shake Booker’s credibility by attacking his motive and character. Shobat reminded the jury that Booker could get drastically reduced sentences in exchange for his cooperation with prosecutors, and that the inconsistency in his testimony suggests he could have lied.

Jurors alone are to decide if they believe all of Booker’s testimony, part of it, or none of it.

In the 1980s, Booker dropped out of high school at age 14 and joined the Four Corner Hustlers gang. That was the era of the crack epidemic, and gangs were highly organized around drug dealing and turf protection.

After Booker spent a stint in prison and got out on parole in 1996, he found Four Corner Hustlers and other gangs in his West Side community collapsing into smaller factions.

Both Booker and Spann chose to join the Four Corner Hustlers faction led by Gaudy Thornton. two often paired up to rob drug dealers, with Spann setting up the drug buy and then Booker walking up with a firearm to rob the dealers of everything.

In late 1990s, Booker was locked up again and he got out in 1999 to find Spann no longer belonging to the Gaudy faction. Spann said to Booker: “I am outlawing. I am not answering to anybody no more.” So, the Outlaw faction of Four Corner Hustlers was born, Spann being the alleged leader.

Booker said he became a “shooter” for Spann, and he would “shoot whatever the case may be” on Spann’s orders.

In 2000 alone, Booker shot and killed Carlos Caldwell, Maximillian McDaniel, and Levar Smith. n in 2003, Booker was an accomplice in the murder of George King and Willie Woods. All five murders were never solved by Chicago Police.

For much of the time afterwards, Booker was locked up in jail. During the brief stint he was out on parole in 2012, Booker aided numerous extortions of drug dealers allegedly on Spann’s orders, with Spann asking for money and drugs and Booker standing by with a firearm.

Defense attorney Shobat, in his questioning of Booker, tried to prove to the jury that Booker committed those murders and extortions of his own free will. That is, even if Spann had ordered them, Booker could have chosen not to do it or have even left the gang altogether, if he wanted to.

Shobat asked: “If you say, ‘I’m sick of you, Spann.’ You can walk away, you had that opportunity any time and you are free to go, right?”

Shobat added, “What is true of you is true of everybody that call themselves Outlaws, right?”

Shobat said, “y don’t have to listen to Spann if they don’t want to.”

Booker answered, “If you have been with Spann long enough, you know what kind of guy he was.”

In response, the federal prosecutor, Assistant U.S. Attorney William Dunne, tried to prove to the jury that though Booker might have seemed free to go, there could be dire consequence for him. Dunne listed a few examples where Spann hurt or killed Four Corner Hustlers members who had turned against him.

Shobat also tried to cast Booker as a career criminal who, once out on parole, went right back to a criminal life in violation of parole conditions. He also tried to paint him as an unreliable witness by pointing out inconsistencies in his testimony.

More importantly, Shobat hammered away at Booker’s motive to testify against Spann.

Like Spann, Booker was also a defendant in the RICO indictment, but he took a plea agreement with the government to testify truthfully against Spann in exchange for a drastically reduced sentence.

According to Shobat’s math, in the best-case scenario, Booker could get out of prison in three years and three months. Booker has been incarcerated since 2012 for an unrelated charge of illegal possession of guns.

Shobat asked, “You are hoping that you have three more years and three months to serve for all the cases you had and are facing, including three murders you committed and at least three you assisted, right?”

In response, Dunne reminded the jury that the plea agreement condition is for truthful testimony. That is, Booker must truthfully testify if he is to receive a reduced sentence.

Dunne asked, “I’m asking you, for the last few days, are you telling the truth?”

credibility of Booker’s testimony lies in the hands of the jurors. Judge Thomas Durkin at the outset of the trial instructed jurors to look for facts only, and to evaluate credibility of testimony through a witness’s intelligence, access to evidence, motive, memory, and consistency.

In September 2017, 10 Four Corner Hustlers members were charged along with Spann in the sweeping RICO indictment. Since then, seven defendants, including Booker, took plea deals and three agreed to testify against Spann. Spann is the lone defendant standing in the months-long trial that is expected to conclude in late November.

Since the 1970s, federal prosecutors have used the RICO statute to go after behind-the-scenes gang bosses and squash the Mafia and street gangs. last major federal RICO trial in Chicago dates to 2016, when a jury convicted six Hobo gang leaders, four of whom were sentenced to life in prison.