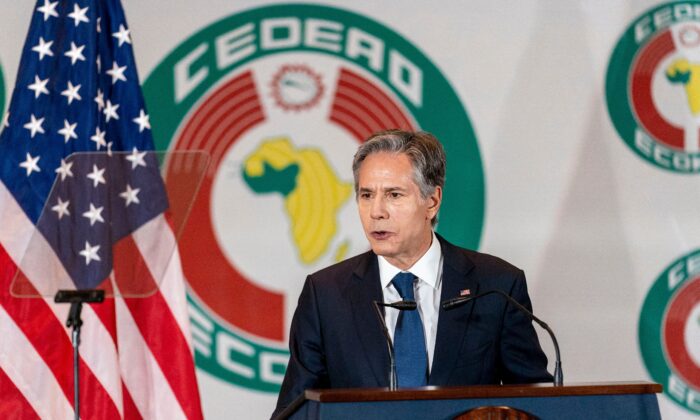 JOS, Nigeria—Human-rights groups from around the world have reacted with dismay to the recent delisting of Nigeria as a “Country of Particular Concern” (CPC) by the U.S. Department of State.

Also on Nov. 18, Blinken listed Algeria, Comoros, Cuba, and Nicaragua among the countries on the U.S. watch list for religious freedom.

Yet on Sept. 26, among other killings, Muslim radicals are credited with massacring 38 Christians in Madamai, Nigeria. On Oct. 31, an entire Baptist congregation was kidnapped.

“ challenges to religious freedom in the world today are structural, systemic, and deeply entrenched,” Blinken said in a Nov. 17 statement concerning religious freedom designations. “y demand sustained global commitment from all who are unwilling to accept hatred, intolerance, and persecution as the status quo.”

“In far too many places around the world, we continue to see governments harass, arrest, threaten, jail, and kill individuals simply for seeking to live their lives in accordance with their beliefs,” the statement reads.

Blinken was interviewed by Nigeria’s Channels TV on Nov. 19, and he mentioned the issue of police abuse of protesters in Lagos, Nigeria, in October. Yet, critics noted that Blinken didn’t mention the ongoing killings of Christians in northern Nigeria.

Nigeria was first added to the CPC list by the Trump administration in 2020. Blinken’s delisting of the country went contrary to the recommendations of the U.S. Commission on International Religious Freedom (USCIRF), which has recommended that the country be relisted.

Blinken’s failure to redesignate Nigeria is “unexplainable,” according to USCIRF Chair Nadine Maenza in a Nov. 17 statement.

“USCIRF is especially displeased with the removal of Nigeria from its CPC designation, where it was rightfully placed last year, as well as the omission of India, Syria, and Vietnam,” Maenza said. “USCIRF is disappointed that the State Department did not adopt our recommendations in designating the countries that are the worst violators of religious freedom.”

Franklyne Ogbunwezeh, a senior research fellow and director for Genocide Prevention in Africa at Christian Solidarity International, noted that USCIRF wasn’t the only organization to voice concern regarding Nigeria’s delisting.

“More than 40 religious organizations from across the world signed an appeal in August for the relisting of Nigeria over rising religious violations,” he said.

Ogbunwezeh also considers the action as a victory for authoritarianism.

“Blinken’s visit has been a strategic win for the Buhari government and a very tragic day for human rights in Nigeria,” Ogbunwezeh said on Arise TV on Nov. 19.

“ fact remains that in northern Nigeria, Sharia and blasphemy laws are still being used to discriminate against Christians. Christians don’t get permission to build or renovate their churches—we know that. And the government at the state level is increasingly becoming authoritarian.”

human rights violations against Christians have been confirmed by the president of the Christian Association of Nigeria (CAN), Rev. Samson Ayokunle.

“We have lost many people and places of worship to their assault, especially in the north-central part of the country and the northeast,” Ayokunle said in a Nov. 19 statement. “That agenda with the killing of Christians has not stopped till today, and Nigerians are living witnesses.”

“ISWAP and other Islamic terrorists that surrendered or were captured were not allowed to face the wrath of the law. se are the people who said their agenda was to wipe away Christianity from Nigeria and to plant Islam as the only religion from the north down to the Atlantic Ocean in the south.

“ bandits have joined other militant Islamic groups to be ferociously attacking churches, killing worshippers, and kidnapping for ransom.”

country’s officials—who have failed to compensate for losses caused by religious extremists, according to Ayokunle—are compounding the pains of Christians through targeted prosecution and policies.

“In a similar vein, Christian students had and are still complaining that they are denied admission to government-owned universities in the north to study courses such as law and medicine, among others. Christian students such as Leah Sharibu in 2018 and students recently kidnapped from Bethel Baptist High School were left with the kidnappers without any purposeful rescue mission organized for them.

“ relatives and churches of the kidnapped people were forced and are being forced to pay ransom worth millions of Naira to secure their people or children! Up till now, the federal government refused to see banditry as terrorism and has therefore refused to label them as terrorists.”

Executive Director of the International Committee on Nigeria (ICON) Kyle Abts told Pezou that Nigeria’s delisting could worsen the human rights violations against the country’s Christians.

“At its core, the CPC designation promotes accountability between the Nigerian government and the U.S. government. Withdrawal of Nigeria could embolden violators of religious freedom,” Abts wrote in a text.

“Speaking to leaders from various Fulani groups along with others from humanitarian organizations and Christian institutions, [I learned that] they are shocked that the U.S. government lifted the CPC designation. y believe for them to do that now creates confusion to those fighting for religious freedom and, in fact, emboldens the violators and perpetrators of violence against religious freedom and human rights.

“Maintaining Entity of Particular Concern (EPC) on Boko Haram and ISWAP is important, but when you remove the CPC designation, you are basically removing the government’s responsibility to protect her citizens and provide human flourishing.”