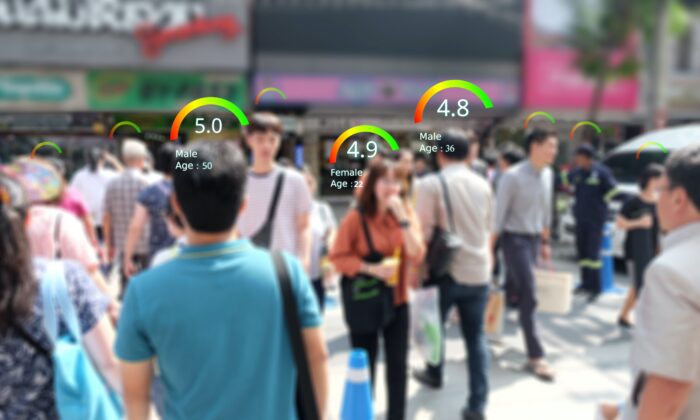 Critics of the Chinese Communist regime often point toward the government’s social credit system, in which the government traces individuals’ electronic paths, from their comments on social media to items they purchase, and issues rewards and punishments based on the information collected. For example, a Chinese citizen who receives a “bad” social credit score might not be permitted to ride one of the famous high-speed trains, being relegated to the slower trains for travel, and might be denied air travel.

Not surprisingly, people in the West have denounced the system as being heavy-handed, including CBS News, hardly a voice of antiprogressivism:

“The fear is that the government will use the social credit scoring system to punish people who are not sufficiently loyal to the communist party, and trying to clear your name or fight your score is nearly impossible since there is no real due process.”

Human Rights Watch, hardly a right-wing entity, is even more scathing in its criticism of China’s system:

“Apple CEO Tim Cook looks forward to a ‘common future in cyberspace’ with China, he told the Chinese government’s World Internet Conference earlier this month. This was an embarrassing gesture toward a state that aggressively censors the internet and envisions a dystopian future online.”

Other progressive entities, including The New York Times, also have been critical of China’s social credit system but apparently have no problem with the establishment of a similar de facto system here. The Washington Post went even further, openly taking part in a social credit scheme by publicly identifying people who recently contributed to the Canadian truck protesters and demanding to know why they gave money.

Understand that the Post accessed an illegally hacked document and then used it as a weapon against people who dared contribute to something with which the newspaper’s staff disagreed, and the purpose was not to be informative but rather to endanger contributors and make them vulnerable to job loss, public shaming, and other kinds of attacks. This is not a rendition of “Democracy Dies in Darkness” but rather an attempt to impose a greater darkness on all of us.

Not that long ago, political liberals universally would have agreed that using massive electronic surveillance to monitor speech and political contributions was unthinkable. Today, not one mainstream journalistic entity has raised a question about the actions taken by Canada’s government against dissenters or even questioned the Post’s doxing of those contributors. One surmises that the editors of the Post agree with Prime Minister Justin Trudeau, since many protesters do not share the political views of the Post’s staff.

The Post is hardly the only entity that has taken the view that supporting the truckers is tantamount to supporting the Nazi Party. The New York Times has denounced the truckers as violent terrorists, in contrast to the demonstrators in 2020 that “peacefully” destroyed huge portions of American cities, killing and looting as they went. Writes Paul Krugman:

“This isn’t a grass-roots trucker uprising. It’s more like a slow-motion Jan. 6, a disruption caused by a relatively small number of activists, many of them right-wing extremists. At their peak, the demonstrations in Ottawa reportedly involved only around 8,000 people, while numbers at other locations have been much smaller.

Despite their lack of numbers, however, the protesters have been inflicting a remarkable amount of economic damage. The U.S. and Canadian economies are very closely integrated. In particular, North American manufacturing, especially but not only in the auto industry, relies on a constant flow of parts between factories on both sides of the border. As a result, the disruption of that flow has hobbled industry, forcing production cuts and even factory shutdowns.”

It is not that Krugman believes that governments always should curtail violent protests. While his attacks on the truckers present them as violent thugs, Krugman changes direction regarding the riots in American cities in 2020, claiming that they were “remarkably nonviolent”:

By contrast, causing economic damage was and is what the Canadian protests are all about—because blocking essential flows of goods, threatening people’s livelihoods, is every bit as destructive as smashing a store window. And unlike, say, a strike aimed at a particular company, this damage fell indiscriminately on anyone who had the misfortune to rely on unobstructed trade.

And to what end? The B.L.M. demonstrations were a reaction to police killings of innocent people; what’s going on in Canada is, on its face, about rejecting public health measures intended to save lives. Of course, even that is mainly an excuse: What it’s really about is an attempt to exploit pandemic weariness to boost the usual culture-war agenda.”

Krugman hardly is alone at The New York Times. Fellow columnist Michelle Goldberg described the demonstrations as “terrifying” and roundly condemned the truckers as nothing more than “right-wing” protesters, which is NY Times speak for people who should have no rights. As for the 2020 demonstrations being peaceful, former NY Times writer Nellie Bowles wrote about how the NY Times withheld her account of the aftermath of the Kenosha riots until after the 2020 election. She had this to say about the mentality behind the NY Times’ decision to withhold the truth:

“Eventually the election passed. Biden was in the White House. And my Kenosha story ran. Whatever the reason for holding the piece, covering the suffering after the riots was not a priority. The reality that brought Kyle Rittenhouse into the streets was one we reporters were meant to ignore. The old man who tried to put out a blaze at a Kenosha store had his jaw broken. The top editor of the Philadelphia Inquirer had to resign in June 2020 amid staff outcry for publishing a piece with the headline, “Buildings Matter, Too.”

If you lived in those neighborhoods on fire, you were not supposed to get an extinguisher. The proper response—the only acceptable response—was to see the brick and mortar torn down, to watch the fires burn and to say: thank you.”

But what does this have to do with the American and Canadian views of social credit? First, as noted earlier, there has been no condemnation of the Canadian government’s heavy-handed crackdown on the truckers, just as no one in the mainstream press even has questioned the Post’s attempt to shame and dox the truckers’ donors. When given the opportunity to condemn what clearly are social credit measures, elite American and Canadian politicians, academics, and journalists have been silent.

Second, by invoking emergency powers, Trudeau has assumed near-dictatorial powers, which would be antidemocratic in anyone’s book, yet again, the “Democracy Dies in Darkness” crowd has remained silent. I link no articles because there are none to link.

Beyond the issue of its classifying people who simply are demonstrating nonviolently as “terrorists,” there is no way that such an order can be limited to one instance. Now that Canada’s progressive government has criminalized even peaceful dissent—with approval by the progressive elites in both Canada and the United States—it will be easier for governments to cross those lines when people express dissent against progressive measures in the future.

All of this goes well beyond the usual accusations of political hypocrisy. One accuses people of being hypocrites in order to shame them, but the “Democracy Dies in Darkness” crowd is well beyond any capability of being shamed. To them, whatever Trudeau and other progressive regimes do to those that dare dissent against progressive governance is legitimate because there can be no other permissible way of thinking, even while those same people give lip service to constitutional protections such as the First Amendment.

Such protections do not and will not apply to people in groups that do not support progressive ideals and, as we have seen in Canada, officials will increasingly resort to a social credit system undergirded by the “woke capitalists” of the technology sectors, who apparently have no problems being primary agents of state-sponsored surveillance. For example, Twitter gladly permitted the doxing of people who contributed money to the truckers via a supposedly secure platform. We can expect more of this. Writes Michael Rectenwald:

“Woke capitalism cannot be sufficiently explained in terms of placating coastal leftists, ingratiating left-liberal legislators, or avoiding the wrath of activists. Rather, as wokeness has escalated and taken hold of corporations and states, it has become a demarcation device, a shibboleth for cartel members to identify and distinguish themselves from their nonwoke competitors, who are to be starved of capital investments. Woke capitalism has become a monopoly game.

Just as nonwoke individuals are cancelled from civic life, so too are nonwoke companies cancelled from the economy, leaving the spoils to the woke. Corporate cancellations are not merely the result of political fallout. They are being institutionalized and carried out through the stock market. The Environmental, Social, and Governance (ESG) Index is a Chinese-style social credit score for rating corporations. Woke planners wield the ESG Index to reward the in-group and to squeeze nonwoke players out of the market. Woke investment drives ownership and control of production away from the noncompliant. The ESG Index serves as an admission ticket for entry into the woke cartels.”

Likewise, we can expect the same pressures to be placed upon nonbusiness entities like nonprofit advocacy groups and especially conservative churches. As progressives continue breaking down the historical barriers between the state and private life, a social credit system will fill the void. Individuals, business firms, and organizations that promote progressive viewpoints will see minimal disruption in their lives.

However, those individuals and entities that hold viewpoints that are “unacceptable” can expect to see daily disruptions, from their finances to simple communications by email. Given the support that American political and economic elites have shown for Trudeau and his crackdowns on “terrorist” truckers, there is little protection left for those that are not in the good graces of progressives.

Because progressive governance ultimately clashes with reality, progressives must develop ways to enforce their measures, especially when the inevitable pushback occurs. As we have learned from China, a social credit system is one way to curb dissent and to force some people to the margins. American and Canadian progressives are finding social credit also can figuratively beat people into submission.