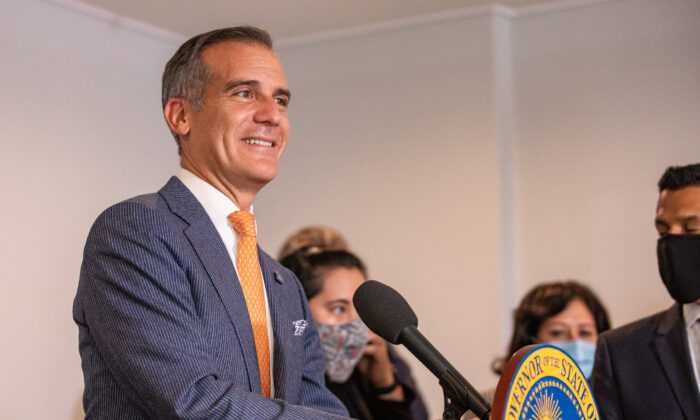 LOS ANGELES—Mayor Eric Garcetti on March 7 signed into law recommendations from the Department of Transportation—already passed by the City Council—to reduce speeds by 5 mph on more than 177 miles of city streets.

“No parent should worry about their child going to school. No older adult should feel unsafe when they walk around her neighborhood. These are no accidents, it’s just that simple, and we know that the odds of dying of a traffic collision is higher at a greater speed. In fact, it goes up exponentially,” Garcetti said.

The city council unanimously adopted an ordinance on Feb. 22 amending the Los Angeles Municipal Code to change the speed limits on the proposed streets.

Now that it has been signed by the mayor, the law will take effect a month after its publication.

The change, which is aimed at preventing deadly accidents, was made possible following the passage of Assembly Bill 43, which took effect this year, giving cities more control over their speed limits. The bill was introduced by Assemblywoman Laura Friedman (D-Glendale).

Before the new law went into effect, the transportation department was required to increase speeds on 200 miles of the city’s streets. According to the department, a pedestrian hit by a vehicle going 20 mph has a 90 percent chance of surviving, but the chance shrinks to only 10 percent if a vehicle is going 40 mph.

“As humans, we’re not designed to survive an encounter with a moving vehicle going faster than 40 miles an hour,” said LADOT General Manager Seleta Reynolds.

“The day that we had to take that action of increasing speed limits on 200 miles of streets was an extremely dark day for those of us at the Department of Transportation and advocates everywhere who spend all of our time, energy and talent and treasure trying to change those statistics, trying to save those lives.”

The department hopes that lowering speeds will decrease the severity of injuries, as well as give drivers more time to react to a potential collision.

The full list of streets that would have their speed limits lowered is available in the city council’s Feb. 10 report (pdf) on the ordinance.