Ketanji Brown Jackson, the Descendant of Slaves Who Would Diminish Our Freedoms 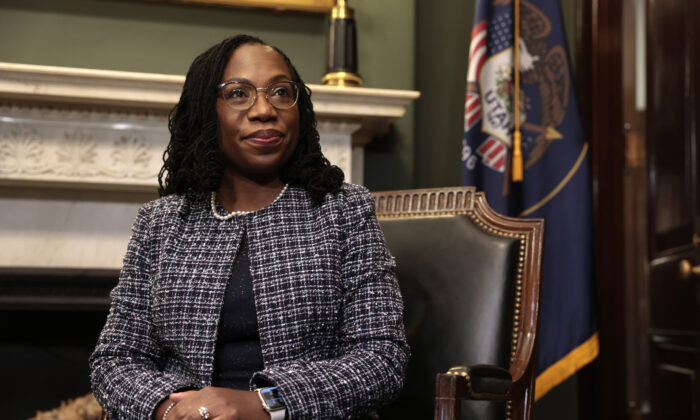 She replied: “I think judicial activism is when a judge is unable or unwilling to separate out their own personal views of a circumstance or a case and they view consistent with those views rather than the law, as they’re required to do.”

But if the history of Supreme Court nominations has taught us anything, it is that there’s no such thing as a judicial activist who admits to being a judicial activist. When in 2009 then-Sen. Al Franken (D-Minn.) asked Obama-appointed Justice Sonia Sotomayor to define judicial activism during her confirmation hearings, she replied: “I don’t describe the work that judges do in that way … hopefully judges—and I know that I don’t approach judging in this way at all—are not imposing policy choices, or their views of the world or their views of how things should be done. That would be judicial activism, in my sense, if a judge was doing something improper like that.”

This from the present Supreme Court’s most notorious activist justice, who during oral arguments on Biden’s COVID mandates two months ago described not her views of the world but of a fantasy world, falsely claiming, “We have over 100,000 children, which we’ve never had before, in serious condition, and many on ventilators.” Even left-wing media declared her tendentious assertion groundless.

In December, during oral arguments on the Mississippi abortion case the high court will decide later this year, this jurist who claims not to be “imposing policy choices” or her “views of how things should be done” compared babies within the womb to cadavers, remarking regarding whether pain is felt when an an abortion is performed that “about 40 percent of dead people who, if you touch their feet, the foot will recoil. There are spontaneous acts by dead brain people. So I don’t think that a response by a fetus necessarily proves that there’s a sensation of pain or that there’s consciousness.”

Justice Elena Kagan, Obama’s other SCOTUS appointment, who was his solicitor general, charged with advocating his policies before the court, also condemned activism during her confirmation hearings in 2010, declaring that “judges should think of themselves, as I indicated before, only as policing the constitutional boundaries, only as ensuring that the legislature does not overstep its constitutional role by interfering with the states or by violating individual rights,” not “making the fundamental policy decisions for this nation,” like Congress.

As Princeton politics professor Keith Whittington has noted, Sotomayor, Kagan, and the other liberal justices on the court during their tenure, “form a tight bloc, voting together but rarely voting with [Justice Clarence] Thomas or [the late Justice Antonin] Scalia.”

As was the case with Sotomayor and Kagan, we already know that Jackson is going to be an activist justice, no matter what clever verbal dance she performs before senators and the TV cameras. We know it from what she has done, not what she has said, and we know it from her personal background.

Jackson’s nomination is historic, and a development for which every American can be proud. As this first woman of African descent has noted, “my ancestors were slaves on both sides.”

Jackson apparently considers disorderly conduct—like repeatedly screaming profanities, in defiance of police warnings, during a public gathering—to be free speech protected under the first amendment. She also, in Brown v. Government of the District of Columbia in 2018, actually concluded that panhandling was free speech, which Washington, D.C., panhandling laws were suppressing. “Plaintiffs have plausibly alleged that the panhandling provisions at issue are content-based laws that restrict protected speech in public forums,” she wrote in her decision.

She would be the first federal public defender ever placed on the Supreme Court, having during her short tenure a decade and a half ago saved a drug dealer’s lawyer from jail time, gotten a convicted illegal handgun owner’s case dropped, and represented terrorists seeking release from incarceration in Guantánamo Bay, and so Republican senators have reasonable worries that she will be soft on crime. It is in the economic realm, however, that Judge Jackson constitutes the greatest threat to liberty, and has displayed the most questionable judgment.

Her father having been chief attorney for the Miami-Dade County school board, and her mother the principal of a high-end Miami public school, it should come as no surprise that Jackson has a tendency to rule in favor of labor unions; public school teachers’ unions may be the most dependable supporters of the Democratic Party to be found.

But when Jackson in 2018 insisted that her district court had jurisdiction when 17 federal worker unions tried to get three of President Donald Trump’s executive orders pertaining to collective bargaining declared unconstitutional, she was humiliated by the D.C. Circuit when judges appointed by presidents of both parties struck it down.

As the D.C. Circuit noted, Jackson had claimed that the Federal Labor Relations Authority’s expertise in addressing the workers’ grievances, which the law directs the agency to do, “was ‘potentially helpful’ but ‘not essential to resolving’ the unions’ claims.” Therefore the unions should be able to turn to Jackson’s court. “But,” as the appellate court pointed out, “that is not the law. The question we must ask is whether agency expertise may be ‘brought to bear on’ the claims, not whether the expertise is essential.”

The decision overturning Jackson added: “many of the claims” of the 17 unions, with which Jackson agreed, “are not so grand” as they suggest, requiring resolution by the judicial branch rather than an executive agency, “but rather require interpreting the Federal Service Labor Management Relations Statute (FSLMRS)—the very law that the FLRA is charged with administering and interpreting. Regardless, the Supreme Court has ‘clarified’ that ‘an agency’s relative level of insight into the merits of a constitutional question is not determinative.’”

In her first ruling as a D.C. Circuit judge, in February, Jackson stopped the same agency, the FLRA, from enacting a rule that would relieve it from having to bargain with workers over trivial matters regarding conditions of employment, such as office seating arrangements. Clearly she prefers employees to employers.

Tone is another clue. In her overruled 2018 decision, she found Trump Administration Justice Department attorneys’ arguments “clever, but ultimately unpersuasive.” She begins sentences with “of course” eight times in a ruling of about 60 pages. “The end is nigh,” she quips as she accuses the Trump Administration of “an improper exercise of his statutory authority to regulate federal employee labor relations.”

The signs are that the nomination of Jackson will be historic not only in terms of her sex and ethnicity, but in what it may come to mean, if she is confirmed, in judicial intrusion affecting the individual freedom provided by safe communities, a government free of senseless regulations and union-imposed burdens, and employers’ ability to succeed free of labor harassment.

If her confirmation slides through as smoothly as expected, the public may one day wonder why this woman who made history wasn’t scrutinized with a more critical eye.

Original link : Ketanji Brown Jackson, the Descendant of Slaves Who Would Diminish Our Freedoms