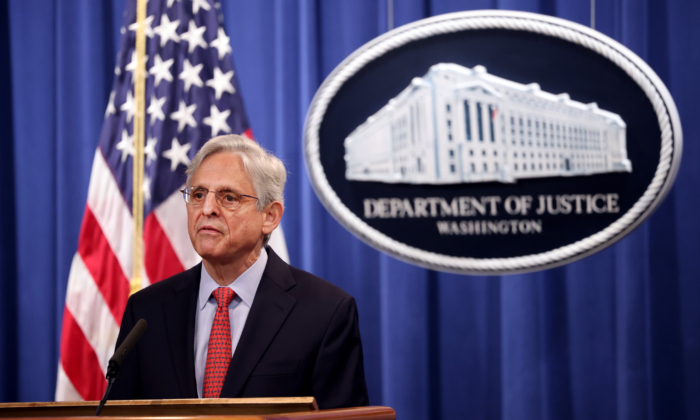 Attorney General Merrick Garland on Oct. 4 announced a concentrated effort to target any threats of violence, intimidation, and harassment by parents toward school personnel.

announcement comes days after a national association of school boards asked the Biden administration to take “extraordinary measures” to prevent alleged threats against school staff that the association said was coming from parents who oppose mask mandates and the teaching of critical race theory.

Garland聽directed the FBI and U.S. attorneys in the next 30 days to convene聽meetings with federal, state, and local leaders within 30 days to “facilitate the discussion of strategies for addressing threats against school administrators, board members, teachers, and staff,” according to a letter (pdf) the attorney general sent on Monday to all U.S. attorneys, the FBI director, the director of the Executive Office of U.S. Attorneys, and the assistant attorney general of the DOJ’s criminal division.

According to the DOJ, further efforts will be rolled out in the coming days, including a task force that will determine how to use federal resources to prosecute offending parents as well as how to advise state entities on prosecutions in cases where no federal law is broken. Justice Department will also provide training to school staff on how to report threats from parents and preserve evidence to aid in investigation and prosecution.

“In recent months, there has been a disturbing spike in harassment, intimidation, and threats of violence against school administrators, board members, teachers, and staff who participate in the vital work of running our nation’s public schools,” Garland wrote. “While spirited debate about policy matters is protected under our Constitution, that protection does not extend to threats of violence or efforts to intimidate individuals based on their views.”

School boards across the nation have increasingly become an arena for heated debate over culture, politics, and health. Parents groups have ramped up pressure on boards over the teaching of critical race theory and the imposition of mask mandates. debate is split sharply along political lines, with Democrats largely in favor of critical race theory and mask mandates, and Republicans opposing both.

Many of the meetings have turned heated. amount and severity of the threats against officials are not known, but Garland’s letter suggests the phenomenon is widespread.

“Threats against public servants are not only illegal, they run counter to our nation’s core values,” Garland wrote. “Those who dedicate their time and energy to ensuring that our children receive a proper education in a safe environment deserve to be able to do their work without fear for their safety. Department takes these incidents seriously and is committed to using its authority and resources to discourage these threats, identify them when they occur, and prosecute them when appropriate.”