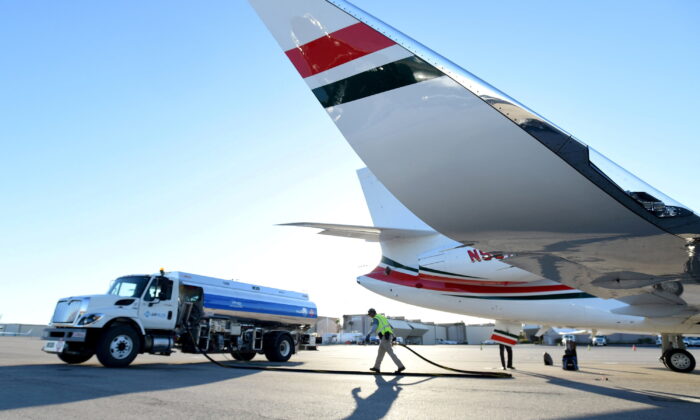 SINGAPORE—Global jet fuel prices have surged to near 14-year highs in line with crude oil’s surge on supply shortfall worries, slamming air carriers and travellers with steep cost increases just as air travel was starting to recover from COVID-19 restrictions.

Oil prices have soared to their highest since 2008 as supplies lag recovering global demand and as the U.S. weighs banning Russian oil imports following Moscow’s invasion of Ukraine.

Global crude oil benchmark Brent has jumped 26 percent to more than $120 a barrel since Russian forces invaded Ukraine on Feb. 24, triggering a global scramble by importers to secure alternatives to Russian crudes that are at risk of sanctions.

The race for crude has jacked up prices for refined products that will be affected if crude supplies tighten, with Singapore jet fuel prices outperforming Brent since Feb. 24 to gain nearly 35 percent and hit $150 a barrel for the first time since July 2008.

Jet fuel prices in Europe and the United States have posted similar gains, leaving global carriers who have already been hammered by COVID-19 over the last two years having to pass on higher costs via fuel surcharges and increased fares.

“Travelling (by air) is not going to be cheap from now onwards. With the inflation across countries, most people have shallower pockets, less disposable income,” a Singapore-based jet fuel trader said.

She said more travellers would limit their plans to “necessary” travel and said restrictions related to the pandemic—with many places still requiring negative COVID tests—added to uncertainties for those travelling.

Global airline capacity dipped 0.1 percent this week to 82 million seats, and remains 23 percent below the corresponding week in pre-pandemic 2019, according to aviation data firm OAG.

Total scheduled airline capacity in North East Asia in the week to Monday dropped 4.5 percent from the previous week, more than any other region, while international capacity to and from the region remains 88 percent below the corresponding week in 2019.

Domestic flight schedules in the United States had been on track to surpass 2019’s levels this spring, but the higher fuel and ticket costs now risk slowing that momentum.

Buoyed by expectations for tighter near term supplies, Asian refining margins for jet fuel on Monday jumped to $26.17 a barrel over Dubai crude, their strongest level on record according to Refinitiv Eikon data that goes back to 2009.