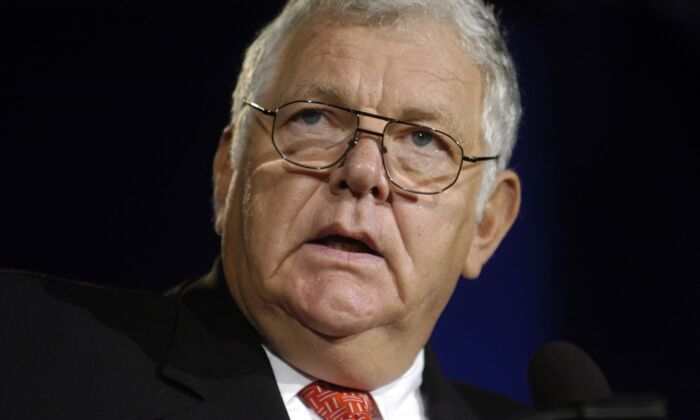 William Bennett, the Reagan administration’s secretary of education, has launched a new online history and literacy program in an effort to combat “anti-American ideology that radically misrepresents” the history of the United States.

new initiative, dubbed “ Story of America,” is aimed at providing middle and high school students with a curriculum that allows them to explore authentic historical contents while improving critical reading and writing skills. curriculum consists of a series of interactive stories drawn from Bennett’s 2007 book “America, the Last Best Hope,” as well as materials developed by other education experts.

“For too long, an anti-America ideology that radically misrepresents U.S. history has infiltrated our education system and misled our kids,” Bennett said Monday in a statement announcing the initiative.

Bennett, who headed the U.S. Department of Education from 1985 to 1988, added that the project will shine a light on our current educational crisis and share the history of our country with the next generation in a way that is truthful, engaging, and gives students the full, complex story of America, which is sadly no longer shared in many of our classrooms.”

online program, which will be fully released in both English and Spanish languages in fall 2022, is developed in coordination with educators, authors, technology experts, and creative artists at the Today Foundation, which previously designed “Texas History Awakens,” an interactive social studies curriculum intended for middle school students in Texas.

“A truthful understanding of our nation’s history, devoid of political activism, is an essential component of that education,” said Richard Collins, the founder of the foundation.

announcement comes amid pushback at the local and state levels against attempts to recast the American story as one about racism and oppression. Last week, North Carolina’s Johnston County school board adopted a policy that would discipline or dismiss teachers if they teach such narratives.

“Racism causes damage to individuals and the community. When racism is present, it creates a lack of trust and respect,” the document reads. “No student or staff member shall be subjected to the notion that racism is a permanent component of American life.”

When it comes to U.S. history, the policy states that “all people deserve full credit and recognition for their struggles and accomplishments throughout United States history,” and that the nation’s founding documents “shall not be undermined.” It banned any Johnston County Schools employee from “making any attempt to discredit the efforts made by all people using foundational documents for reform.”

“No fictional accounts or narratives shall be used to invalidate actual objective historical events. All people who contributed to American Society will be recognized and presented as reformists, innovators, and heroes to our culture,” it added. “Failure to comply with this policy will result in disciplinary action up to and including dismissal.”