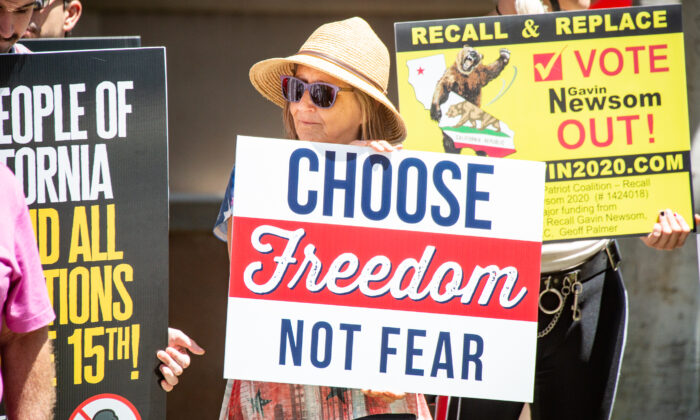 More than 68,000 mostly negative public comments greeted President Joe Biden’s proposed Occupational Health and Safety Administration (OSHA) rule requiring thousands of businesses to require employees to be vaccinated against the CCP virus or submit to a rigorous schedule of testing.

Emergency Temporary Standard (ETS) was proposed Nov. 5 by OSHA, with 30 days of public comment in the Federal Register. ETS requires all private businesses with 100 or more employees to mandate the vaccination or testing and to terminate those who refuse to comply.

Within a few days, the Federal Register was swamped with more than 20,000 comments, virtually all of which were opposed to the proposal. total exceeded 38,000 after a week, and stood at 68,378, as of midnight, Nov. 22.

OSHA mandate was suspended Nov. 5 by the U.S. Appeals Court for the Fifth Circuit in New Orleans. Biden administration asked the court to remove the suspension Nov. 23.

Federal Register does not publish information about a commenter other than a name unless such information is specifically provided by the individual. Comments are not compiled as favoring or opposing a proposal until the comment period is completed.

A cursory survey of the comments published thus far included this one from “K.S. Eden:”

“Why are [you] stepping into the medical field? OSHA, you are an administration to protect workers from occupational health and safety hazards, i.e. hazardous and toxic substances and waste materials, back injuries, fall protection, machine guarding, electrical safety, asbestos, slips, trips, falls, etc.”

Similarly, a lengthy comment from “Shiers, Scot” concluded by noting:

“In summation, I feel that without more time to study the long term effects to HUMANS of the new mRNA vaccines, they could potentially represent a GREATER health hazard to the American workforce than an infectious disease that is likely to have > 1% mortality rate among healthy individuals. And this is not even considering allowable ‘off label’ use of post infection therapeutics.”

And “Ivan Price” declared in his comment that he will “not be getting the vaccine. No employer can or should coerce employees to take part in an experimental gene therapy. This tyranny stops when we say NO MORE. I will not comply.”

comments were not unanimously opposed to the proposal, as seen in that of “Foley, Thomas H.,” who wrote:

Asked by Pezou to put the flood of comments into perspective, Heritage Foundation Research Fellow Rachel Greszler said “I think that is kind of astronomical, actually.”

By comparison, Greszler noted that OSHA issues few ETS proposals, but the most recent one before the vaccine mandate was issued in July regarding occupational exposure to the CCP virus and it generated only 471 comments.

Greszler said she reviewed comment totals on recently published proposed rules and found “there are huge ranges of course, so you have these little ones like on climate change and federal acquisitions that got 12 comments. re was a Social Security Disability Insurance (SSDI) rule about removing the inability to communicate in English that got 214 comments.

“What I thought was a big number of comments before regarded independent contractor status where you had free-lancers, people working for themselves and so forth, and that had had 4,300 comments.”

Greszler added that a proposed rule on the Deferred Action for Childhood Arrivals (DACA) received 8,600 comments.

Heritage Action for America Executive Director Jessica Anderson told Pezou the flood of comments reflects the fact “the Biden Administration is claiming power it doesn’t have to dictate the personal medical decisions of millions of Americans, but we are fighting back. This example of Americans taking action proves the power of the grassroots’ ability to mobilize and stand up against these top-down mandates from Washington.”

Anderson’s group actively encouraged its members to submit comments and included links to the Federal Register to help them do so.

More than a dozen state attorneys general have sued in federal court to stop the Biden mandate, as have multiple public interest law firms representing media organizations, colleges, and individuals. many court challenges to the mandate have been consolidated into one court, the U.S. Court of Appeals for the Sixth Circuit.

Republicans on the House Education and Labor Committee are backing a sense of Congress resolution declaring that OSHA has no constitutional authority to issue the mandate.

“Never before in its 50-year history has [OSHA] been corrupted into imposing such an oppressive mandate onto the American people. se are the hardworking men and women who go to work every day and provide for their families,” Rep. Fred Keller (R-Pa.), who introduced the resolution, told Pezou on Nov. 23.

Keller is the top Republican on the committee’s workforce protections subcommittee.

“We are fighting to nullify this rule through our Congressional Review Act resolution which sends a clear message to this administration: Americans will not tolerate such blatant overreach on the part of the federal government,” Keller added.

A spokesman for the Democratic majority on the education and labor panel did not respond to Pezou’ request for comment.