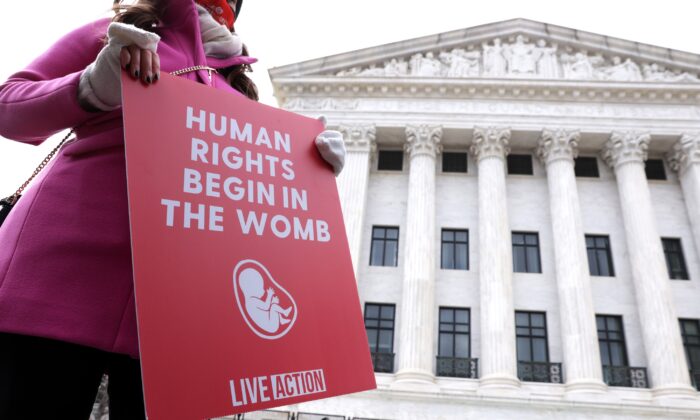 Attorneys for a Connecticut faith-based pregnancy center are mounting a constitutional challenge to a state law requiring it to provide abortion referrals, claiming the statute violates the First Amendment’s guarantee of religious freedom and freedom of association, due process, and equal protection.

law—Public Act No. 21-17—proscribes “deceptive advertising” by limited services pregnancy centers (LSPC) and exclusively empowers the state attorney general to impose monetary fines and require “corrective” advertising to be paid for by the offending center.

Limited services pregnancy centers are those that don’t provide abortions or abortion referrals and that offer faith-based counseling, health care, and other services to encourage a pregnant woman not to abort the baby.

Connecticut legislature approved the law in May after it failed to gain passage in 2020 and 2019.

State Attorney General William Tong told the legislature in testimony that “some limited services pregnancy centers openly acknowledge in their advertising that they do not provide abortions or emergency contraception, and that they believe abortion is wrong.”

Tong said he supports the right to express a pro-life viewpoint, but “there is also the reality of deceptive advertising by other LSPCs. Some LSPCs have misled pregnant women into the false belief that they offer abortion services, emergency contraception, and unbiased counseling.”

“This law allows the attorney general to prosecute pro-life speech for substantial fines, to bring an action in court and prosecute them, and ultimately the centers would have to pay $1,000 per violation and unlimited attorney’s fees,” ADF senior counsel Denise Harle told Pezou on Oct. 13.

suit was filed on Oct. 11 in the U.S. District Court for the District of Connecticut.

“re is no way to protect yourself because this law allows the attorney general to say, ‘I’ve decided that you are deceptive. If you don’t correct your speech with the speech of the government’s choice, I will take you to court in 10 days and you will be subject to fines and all the fees you use to defend yourself if the judge goes my way,’” Harle said.

Harle says that while the law doesn’t provide a basis for an individual to sue the centers for not providing abortion referrals or services, “it does allow anyone to complain to the attorney general and he can then immediately launch an investigation and prosecution.”

“So it opens it up for any citizen in the state who is opposed to pro-life views and is hostile to that viewpoint to say that a pregnancy center did something wrong. And that’s exactly the point, because this law is targeting pro-life speech.”

In testimony earlier this year, Tong pointed out that the Supreme Court declined to hear the appeal of a 9th Circuit Court of Appeals decision upholding a San Francisco ordinance that he said the Connecticut law “closely tracks.”

But the ADF said in a statement that it previously “reached a successful settlement in a similar Connecticut case when the city of Hartford agreed that a faith-based pregnancy center isn’t subject to a law that would have forced the center to post materials that undermine its life-affirming message.”

Harle also said, “ Supreme Court has made it clear that the government can’t target certain messages because it doesn’t like a particular viewpoint. Care Net should have the freedom to continue serving women in southeastern Connecticut without government censorship.”

In its filing, the center argued that as a nonprofit, it “is an expressive association because people with likeminded beliefs, including those on staff and volunteers in its organization, are joining together to assist and serve women in the Connecticut area and to express their religious beliefs about God’s creation of life, sexuality, pregnancy, and motherhood.”

“ volunteers and staff at Care Net advocate the position that women deserve dignity, respect, and truth when seeking information and counsel about their pregnancy or a potential pregnancy. Forcing Care Net to make ‘curative’ statements would undermine its ability to advocate that position and cause it to reconsider its operations going forward,” the filing stated.

“Subjecting Care Net to the Act’s vague and over-broad Speech Regulation would also undermine its ability to advocate its beliefs-based position and its free association with women it seeks to associate with.”

suit asked the court to declare the Connecticut law unconstitutional because it violates the First and 14th Amendments.