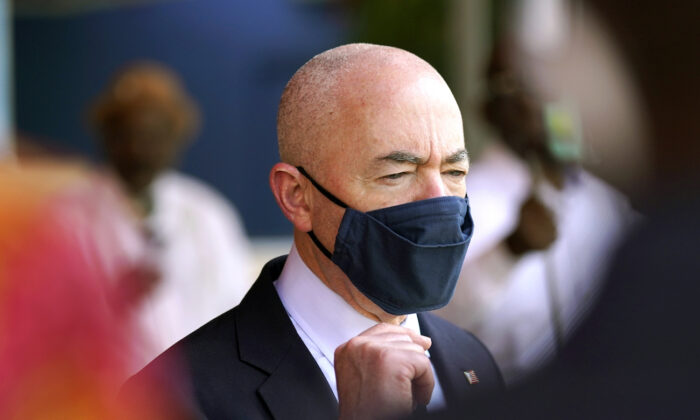 “ deployment of mass worksite operations, sometimes resulting in the simultaneous arrest of hundreds of workers, was not focused on the most pernicious aspect of our country’s unauthorized employment challenge: exploitative employers,” Mayorkas said in the three-page memo (pdf). “se highly visible operations misallocated enforcement resources while chilling, and even serving as a tool of retaliation for, worker cooperation in workplace standards investigations.”

memo is directed at the U.S. Immigration and Customs Enforcement, U.S. Citizenship and Immigration Services
Troy, and U.S. Customs and Border Protection. It calls the agencies to shift their focus toward “unscrupulous employers who exploit the vulnerability of undocumented workers.”

Mayorkas is directing a review of current immigration enforcement policies, which he said should “facilitate the important work of the Department of Labor and other government agencies to enforce wage protections, workplace safety, labor rights, and other laws and standards.”

policies should also “[b]roaden and deepen mechanisms” for different departments to coordinate together, including between the DHS, the Justice Department, the Labor Department, the Equal Employment Opportunity Commission, the National Labor Relations Board, and state labor agencies, according to the memo.

Mayorkas said that revised or new immigration policies should include plans to offer protections—including from deportation—to illegal aliens who “[cooperate] with law enforcement in the investigation and prosecution of unscrupulous employers.”

three agencies have 60 days from the memo to submit their “plans and recommendations” in response to Mayorkas’s directives.

new memo comes just two weeks after Mayorkas issued a separate memo laying out guidelines advising that being in the country illegally is not by itself enough reason to arrest somebody, and that only the illegal aliens who pose a threat to national security, public safety, or border security should be targeted.

United States is experiencing record-setting levels of illegal immigration. According to data from U.S. Customs and Border Protection, there were 208,887 apprehensions related to border crossings in August.

Since taking office, Biden reversed a number of policies from the Trump administration over the border and immigration, including pausing and ultimately suspending border wall construction; stopping President Donald Trump’s “Remain in Mexico” order for arrivals before Jan. 1; and pulling back on using Title 42 emergency powers amid the COVID-19 pandemic by exempting illegal immigrant children and many family units from being expelled under the policy.