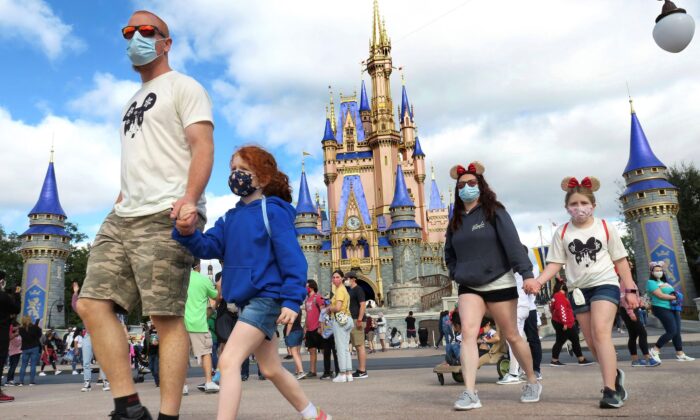 Florida Gov. Ron DeSantis has not changed his stance on a bill that prohibits discussions on sexuality for the state’s youngest students, despite a call from Disney CEO Bob Chapek expressing “disappointment and concern.”

Officially titled “Parental Rights in Education,” House Bill 1557 would, in part, prevent public schools in Florida from encouraging classroom discussions about “sexual orientation or gender identity” in kindergarten through grade three or in a manner that is not age-appropriate or developmentally appropriate for students. DeSantis has signaled his support of the measure and is expected to sign it in the coming days.

Many on the left refer to the bill as the “Don’t Gay Bill,” a name DeSantis pointed out to be misleading, since those words don’t appear in the text. Critics nonetheless labels the policy as discriminatory against the LGBT community, claiming that this is meant to hide the existence of gay and transgender people from students.

Bob Chapek, who has tried to avoid weighing in on the debate over the past few weeks, now says he is against the Florida bill. During Disney’s annual shareholder meeting Wednesday, Chapek explained that the company had been “opposed to the bill from the outset,” but chose not to make public its opposition because it was thought to be more effective “working behind the scenes with lawmakers.”

The CEO then acknowledged that Disney was “ultimately unsuccessful” with its under-the-radar approach, and that he would talk to the governor personally about the bill. “I called Gov. DeSantis this morning to express our disappointment and concern that if legislation becomes law, it could be unfairly used to target gay, lesbian, non-binary and transgender kids and families,” he said, reported The Hollywood Reporter.

A spokeswoman for DeSantis confirmed the call, saying that the governor welcomes conversations about legislation in his state, as long as those discussions are “grounded in facts, not false media narratives.”

“Disney contacted our office today to speak with the governor. This is the first time we have heard from Disney regarding HB 1557,” press secretary Christina Pushaw said in a statement. “The governor’s position has not changed. No in-person meeting has been scheduled yet.”

“Disney is a family-friendly company that creates wholesome entertainment for kids. The same Florida parents who take their families to Disney also support parental rights in education, because they do not want their young children exposed to inappropriate content about sex and gender theory at school,” she added.

Meanwhile, Chapek pledged that Disney will donate $5 million to progressive advocacy organizations, including the pro-LGBT Human Rights Campaign (HRC), only for the organization to turn down his offer.

“The Human Rights Campaign will not accept this money from Disney until we see them build on their public commitment and work with LGBTQ+ advocates to ensure that dangerous proposals, like Florida’s Don’t Say Gay or Trans bill, don’t become dangerous laws, and if they do, to work to get them off the books,” said Joni Madison, interim president of HRC.

Original link : DeSantis Support of Florida Education Bill ‘Has Not Changed’ After Call From Disney CEO