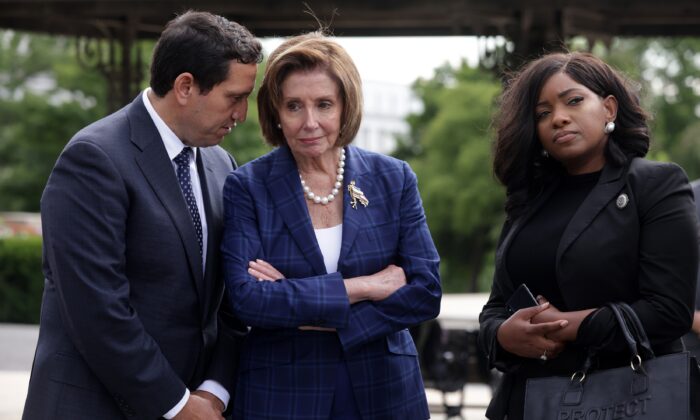 Frustrated over Republicans stonewalling their efforts to raise the debt ceiling, Democrats in the House have introduced two measures that would abolish the debt ceiling or significantly reform it by placing it largely out of Congress’s jurisdiction.

first of the two brief bills contains only two lines: “A bill to repeal the debt ceiling,” while the second declares any standing law relating to the debt ceiling repealed.

For much of U.S. history, no such thing as a debt limit existed, but it slowly came about as a congressional assertion of authority over the president.

Before 1917, Congress could approve individual loans or individual methods to be used by the Treasury, but often lending and spending were left to the president’s discretion.

After the nation became involved in World War I, Congress issued its first blanket debt limit with the Second Liberty Bond Act, which limited the debts that the Treasury could incur to $15 billion. Given the president’s large financial discretion, the bill was intended to limit how much then-President Woodrow Wilson could borrow to finance the war.

Aside from a few scattered bills approved by Congress to cap the aggregate debt limit that the president could borrow, the president continued to exercise largely unilateral control of state finances until the 1970s.

In the 1970s, the revelations surrounding the Watergate scandal led Congress to look deeper into the states’ finances, culminating in a reassertion of authority with the Budget Act of 1974.

bill introduced annual itemized budgets passed by Congress, the budget reconciliation process, and limited the public debt to amounts approved by Congress. Since then, Congress has had unilateral authority to set borrowing limits on the president and the Treasury.

With the legislation, federal spending and revenues became a legislative prerogative rather than an executive one. Since then, the original oversight purpose of the bill has become obfuscated by largely party-line splits over raising the debt ceiling.

Members of both parties have often used the debt ceiling as a mechanism to play political hardball. In 2006, Democrats in the Senate—including then-Sen. Joe Biden (D-Del.) and now-Senate Majority Leader Chuck Schumer (D-N.Y.)—almost unanimously voted against raising the debt ceiling. Republicans have used the same move since then, most notably in 2011 and 2013 under President Barack Obama.

Despite this history of hardball, the move does give Congress the ability to extract concessions from the president, or to make a symbolic gesture of protest against the current administration. Democrats’ 2006 rebellion came as just such a protest vote. During Obama’s tenure, Republicans were able to use the mechanism to obtain a concession from Obama to cut spending.

Now, Boyle’s bill would abolish the debt ceiling altogether, leaving no limits on how much debt the United States can incur. If the measure were approved, neither the president nor Congress could place limits on the maximum acceptable national debt without repealing Boyle’s bill.

Some Democrats are supportive of the bill’s goal.

Rep. John Yarmuth (D-Ky.) told his colleagues on the House floor that the debt ceiling should be eliminated altogether. Reps. James Clyburn (D-S.C.), Bonnie Watson Coleman (D-N.J.), David Trone (D-Md.), Dwight Evans (D-Pa.), Adriano Espaillat (D-N.Y.), and Earl Blumenhauer (D-Ore.) signed on as co-sponsors of the bill. Despite expressing support for the bill, Yarmuth hasn’t signed on as a co-sponsor.

Option B: Give Treasury Secretary Power to Raise Debt Limit

second option would once again restore the power to raise the debt limit to the executive branch. option is put forward in Boyle’s second proposal, called “ Debt Ceiling Reform Act.”

As an appointee of the president, that would return the power to the executive branch and give the president significant influence over the debt limit.

Due to its constitutional power over federal spending, revenues, and debt, Boyle’s bill would allow Congress to keep some influence over the debt limit.

bill says that the decision of the Treasury secretary to raise or lower the debt ceiling can be overridden by a “subsequently enacted” law. This would give Congress the ability to maintain oversight, but actually executing such oversight would be difficult.

Members of the president’s party are likely to continue to be hesitant to override the decision of his Treasury appointee, and to deny the 60 votes needed for any legislative efforts to do so. Without a supermajority of resistance to the decision in the upper chamber, overriding the Treasury secretary’s decision will be a challenge.

This proposal also has shown to be more popular among the Democratic caucus than the first.

Speaker of the House Nancy Pelosi (D-Calif.) has indicated that she supports Boyle’s second proposal, telling a reporter, “I think it has merit.”

Democrats have insisted that reforms of the debt ceiling are necessary to avert crises in the future.

Boyle’s proposals represent the first effort at cementing his party’s demands into law, but will likely face resistance in the Senate, where Republicans have unanimously refused to raise the debt limit, if Pelosi passes either in a House vote.

Both bills are currently tied up in the House Ways and Means Committee.