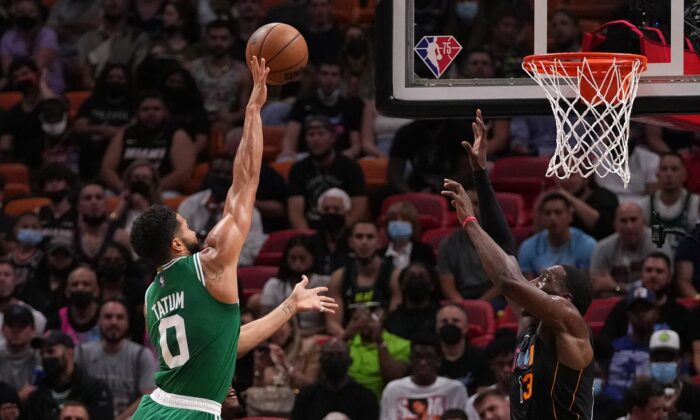 Dennis Schroder scored 14 points, Aaron Nesmith had 13 and Romeo Langford chipped in 12 for Boston, which won its second straight following a three-game losing streak. Al Horford and Jayson Tatum had 10 points apiece for the Celtics, whose four wins have all come on the road.

Miami, which entered the contest averaging a league-high 115.6 points, recorded a season-low point total and shot 34.6 percent from the field and 9 of 41 (22 percent) from 3-point range.

Kyle Lowry had six points, seven rebounds, and five assists for Miami before leaving at the end of the third quarter due to a sprained left ankle.

Robert Williams III grabbed 10 rebounds for the Celtics, who trailed 24-18 after the first quarter.

Robinson made three 3-pointers in the first 12 minutes for Miami but finished 5 of 17 from beyond the arc.

Miami was uncharacteristically sloppy in the second quarter, when Boston capitalized on five Miami turnovers in the first four minutes to move ahead 31-29.

Brown put up 11 points in the first half for Boston, which outscored Miami 33-9 in the second quarter. nine points marked the Heat’s lowest-scoring quarter since Jan. 3, 2020.

Celtics maintained their lead in the third quarter with Nesmith leading the way. Nesmith had scored a total of three points on the season before making three 3-pointers on Thursday.

Brown left the game in the fourth quarter with hamstring tightness. Coach Ime Udoka said Brown would be re-examined Friday.

Tatum, who entered the contest averaging 24.3 points per game, was held to 3-of-13 shooting. His first basket came with 8:35 left in the game, when his 3-pointer gave Boston a commanding 22-point lead.