California Couple Who Stole Millions in COVID-19 Relief Funds on the Run: FBI 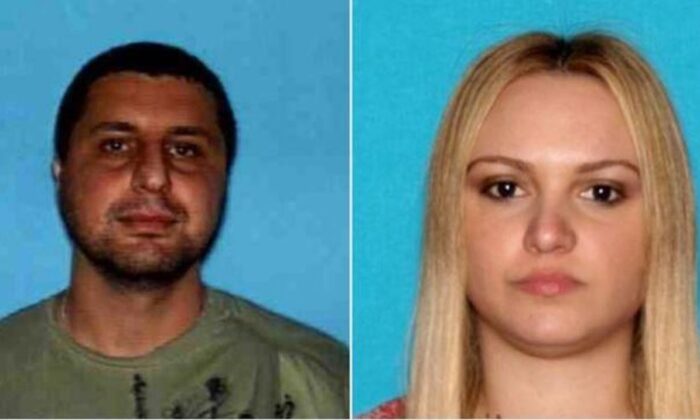 A California couple who were convicted of running a scheme that defrauded the government of millions of dollars in COVID-19 relief funds cut their electronic bracelets and fled while awaiting sentencing, officials said last week.

Richard Ayvazyan, 43, and his wife, Marietta Terabelian, 37, used false identifies to claim money that was meant for small businesses and individuals who had suffered pandemic-related losses, according to federal prosecutors.

“ defendants used the COVID-19 crisis to steal millions of dollars in much-needed government aid intended for people and businesses suffering from the economic effects of the worst pandemic in a century,” U.S. Attorney Tracy L. Wilkison said in a statement released by the Department of Justice.

Terabelian, Ayvazyan, and Artur Ayvazyan were sentenced on Nov. 16 to six years, 17 years, and five years, respectively, according to the DOJ in a news release. Artur Ayvazyan, the brother of Richard Ayvazyan, didn’t flee, officials said.

“ FBI is offering a reward of up to $20,000 for information leading to the arrest of Richard Ayvazyan and Terabelian, who allegedly cut their tracking bracelets on August 29 and went on the run while awaiting sentencing in this case,” the DOJ said, adding that they were sentenced in absentia as “they remain fugitives from justice.”

An FBI spokesperson told CBS Los Angeles that Richard Ayvazyan and his wife cut off their electronic bracelets in August after having been found guilty of swindling about $20 million in COVID-19 relief funds from the government.

But according to court documents, family members said they believe the couple were kidnapped, although prosecutors suggested there was no evidence to suggest they were taken by force.

Richard Ayvazyan’s attorney, Ashwin J. Ram, told CNN that the couple left a note for their teenage children before fleeing earlier this year.

“We will be together again one day,” it read. “This is not a goodbye but a brief break from each other.”

Ram further claimed that federal prosecutors exaggerated the amount that was allegedly stolen by Ayvazyan.

“It should be noted that the government repeatedly touted this to be a $18 million or $20 million case, depending on the day and who was speaking,” he told CNN, adding he hadn’t spoken to Richard Ayvazyan since August. “At the sentencing hearing, however, the court found that Richard Ayvazyan is only responsible for a loss amount in the range of $1.5 million. That is a far cry from the government’s theory of the case.”