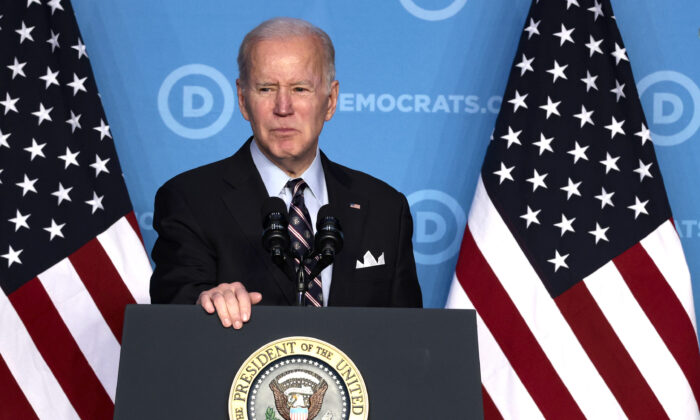 President Joe Biden made the case for his party at the Democratic National Convention Winter Meeting in Washington Thursday night, calling for the same “work ethic” and “enthusiasm” that won Democrats the presidency and the majority in both houses of Congress in 2020.

On the other side of the aisle, Republicans are also displaying confidence, pointing to 40-year high inflation, the crisis at the U.S. southern border, and the increase in crime under the Biden administration.

The most recent Reuters/Ipsos polling data shows Biden to have a 49 percent disapproval rating compared to 45 percent of voters who say they approve of the president’s performance.

Biden’s speech to Democrats Thursday came about a week after his State of the Union address and roughly two weeks into a Russian invasion of Ukraine.

As he did with the State of the Union, Biden led by touting his response to the war.

“Putin was counting on a divided NATO, a divided West, and, quite frankly, a divided America.  But he got none of that,” Biden said. “In fact, he’s now facing a more united, energized, resolute NATO and the West than he ever, ever imagined. And he’s failed to divide Democrats and Republicans.

Biden once again linked the cost Americans are paying at the gas pump to the Russian invasion and acknowledged that those prices will likely continue to rise. He says domestic oil production is expected to pick up to help mitigate the cost, despite maintaining his policy to allow no new federal leases to oil companies.

“[Oil companies] have the capacity to do it.  They have over 4,000 opportunities.  They say there’s nothing the U.S. government needs to do to incentivize them,” Biden said.

The president also touted the passage of the $1.9 trillion American Rescue which passed a year ago along party lines. Biden credits the bill with the job growth American saw coming off a year of state-imposed lockdowns and the drop in unemployment to 3.8 percent.

“That just didn’t happen; it was a direct result of how we designed the American Rescue Plan,” he said.

Biden continues to push for elements of his agenda formerly known as “Build Back Better”—a massive social spending bill that ultimately stalled in the Senate.

In his speech Thursday, the president called for lowering the cost of prescription drugs and childcare and putting in place incentives for households that use less energy.

The president also renewed demands for his “unity” agenda, calling on Congress to address bipartisan issues like the opioid crisis, veterans’ health, mental health, and cancer.