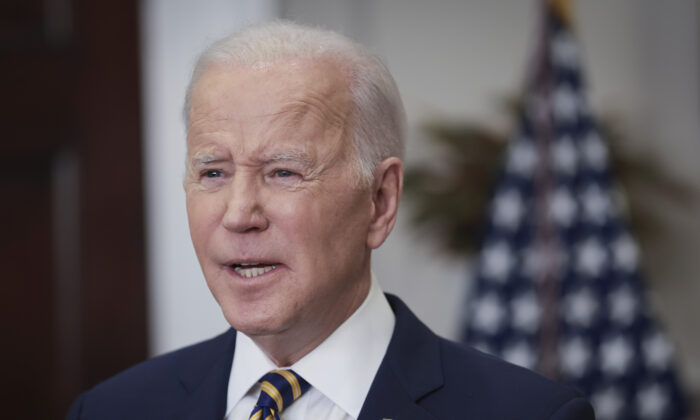 President Joe Biden travelled to Texas on Tuesday to call for new measures to protect veterans exposed to toxic burn pits during the Iraq and Afghanistan wars.

Burn pits were widely used on the bases and battlefields of Iraq and Afghanistan as a means of disposing refuse—anything from daily trash, to tires, batteries, and plastics. The giant garbage dumps were lit with either diesel or jet fuel and servicemembers couldn’t help but breathe in the fumes.

Biden is calling for the passage of two bipartisan bills in Congress that would take a number of steps to increase access to Veterans Affairs (VA) medical care for veterans exposed to burn pits.

“These are bills that unite the American people. These are the bills that will deliver necessary care for our veterans and their families,” Biden said during a speech at the Resource Connection of Tarrant County in Fort Worth, Texas. “Let’s get those bills to my desk so I can sign them immediately—immediately.”

The new laws would extend the eligibility period for VA care for burn pit-related health impacts from 5 years after leaving the military to a minimum of 10 years—opening enrollment to all veterans who served in Iraq and Afghanistan.

The measures would also mandate research, reform the process for determining presumptions, and adding more conditions to the list of presumptive care.

One bill has already passed in the Senate, and the other in the House.

“This is an incredible generation, the 9/11 generation that fought,” Biden said in his speech. “They served in a way … I think that maybe, they’re right up there with the greatest generation because they not only got deployed once, but sometimes twice, three, four times into harms’ way.”

The issue of burn pits is personal to Biden, as he believes the chemical exposure from the pits may have contributed to the brain cancer that killed his son, Beau Biden, a veteran of the Iraq war.

In his speech, he also noted directing the VA to review more cancers to determine if they are service-connected, and the building of a more comprehensive Departments of Defense (DOD) database to track cases of exposure.

A month ago, Biden announced his commitment to reducing the nation’s cancer death rate by half in the next 25 years as part of an effort to “reignite” former President Barack Obama’s “Cancer Moonshot” initiative.

Republican National Committee (RNC) Chairwoman Ronna McDaniel released a statement blasting Biden’s energy and border policy during his visit to Texas, saying he would rather “buy oil from terrorist regimes and let millions of illegal immigrants flow into the country” than meet with American energy producers during his visit.