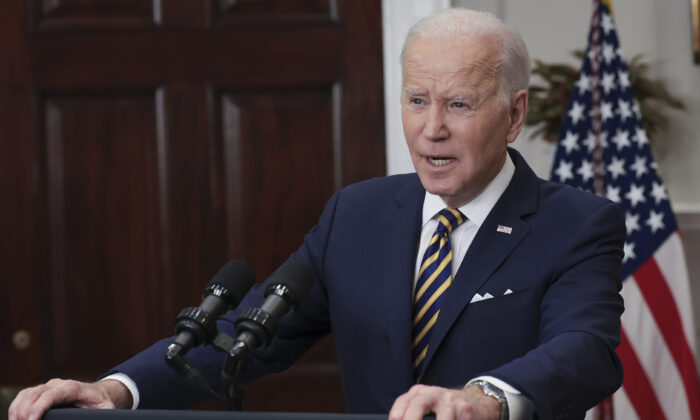 President Joe Biden announced a ban on all Russian oil imports Tuesday in the latest move from the United States to isolate Russia’s economy in response to its invasion of Ukraine.

“This is a move that has strong bipartisan support in Congress and I believe in the country,” said Biden. “Americans have rallied to support the Ukrainian people and made it clear that we will not be part of subsidizing Putin’s war.”

Biden acknowledged the move would cost Americans as well. It comes as gas prices in the United States reach record highs. The national average cost for a gallon of gas reached $4.17 Tuesday, according to the American Automobile Association.

West Texas Intermediate crude futures were trading at more than $128 per barrel Tuesday, having reached its highest level since 2008, $130, in the previous session.

Phil Flynn, an analyst for Price Futures Group, told The Epoch Times Tuesday that Biden’s move will likely leave a void in the oil and gas market.

Some major oil companies have also said they will not buy from Russia, including ExxonMobil, BP, and Shell.

“We have to apply maximum pressure on Vladimir Putin and Russia until it ceases and desists with respect to its aggression and the slaughtering of innocent individuals in Ukraine,” House Democratic Caucus Chair Rep. Hakeem Jeffries (D-N.Y.) told reporters in Washington. “There may be some sacrifice that will be required across the world.”

Countries from all over the world have imposed sanctions against Russia since the start of the invasion but have drawn the line at banning Russian oil.

Biden met virtually with leaders from France, Germany, and the United Kingdom Monday.

In an attempt to help stabilize the market, Biden on March 1 authorized the Department of Energy to release 30 million barrels of oil from the U.S. strategic petroleum reserves, representing half of a coordinated 60-million-barrel release from International Energy Agency (IEA) member states.

U.S. officials have said more options remain on the table to stabilize gas prices but have not detailed those options. Officials have been in talks with major oil producers around the world including Saudi Arabia, Venezuela, and Iran, but have yet to announce any new oil deals.

Some U.S. senators are warning the Biden administration against seeking any oil import deal from socialist dictator Nicolas Maduro’s regime in Venezuela.

“The Biden administration’s efforts to unify the entire world against a murderous tyrant in Moscow should not be undercut by propping up a dictator under investigation for crimes against humanity in Caracas,” said Sen. Bob Menendez (D-N.J.), chairman of the Foreign Relations Committee, in a statement Monday. “The democratic aspirations of the Venezuelan people, much like the resolve and courage of the people of Ukraine, are worth much more than a few thousand barrels of oil.”

Some members of Congress and the press have called for the United States to increase its domestic oil production as a means of stabilizing gas prices, though this would run counter to the Biden administration’s effort to move the United States away from fossil fuels.

“We need to produce energy of all forms and all types here in the U.S., and do it better than anybody else,” Rep. Bruce Westerman (R-Ark.) said Tuesday.

Flynn seconded that sentiment in his interview with The Epoch Times Tuesday, saying that Biden “needs to get off the back of the U.S. energy industry and reverse course.”

“We’ve actually produced more oil, it is at record numbers, and we will continue to produce more oil. There are 9,000 approved drilling permits that are not being used,” Psaki said on Monday. “So the suggestion that we are not allowing companies to drill is inaccurate.”

Biden says the United States is continuing to supply Ukraine with shipments of defense weapons and humanitarian aid, noting the war has turned 2 million Ukrainians into refugees.