Believers Should Stand Up for Truth Amid Pressure on Religion: Preacher 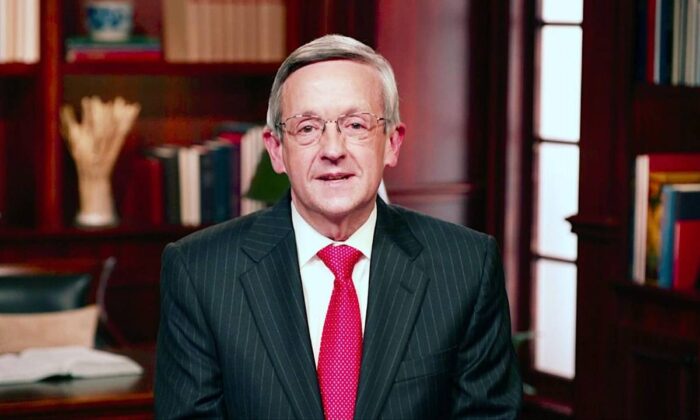 When the government tries to restrict the exercise of religion Christians have to stand up, said Robert Jeffress, a preacher, bestselling author, and television host.

“What distresses me is when Christians refuse to take a stand [on the left’s agenda that is being pushed] and are willing to just blow whichever way the wind blows,” Jeffress told EpochTV’s “Crossroads” program.

“The situation that our culture is in right now, and our country is in, it cannot be blamed on non-Christians. I mean, you expect non-Christians to do this. I think we can blame Christians who have been silent for far too long–what I call wimpy Christians–or not being willing to stand up for truth.”

Jeffress said that Christians do not stand up because of pastors who do not take a stand “on the word of God.”

“In the past, it’s been pastors who have led the way in moral change and moral revolution” during the American Revolution, Jeffress said. It was pastors that led the way in the pro-life movement and in the civil rights movement, he added.

Jeffress noted that some people do not want Christians to impose their values upon America. The question remains: “Whose values do you want to impose upon our country? Every country follows some value system,” he said.

People who are devout followers of a faith, regardless of whether they follow Christianity, Judaism, Catholicism, or any other belief, realize their faith and it impacts every part of their life, be it at home, in business, or how they approach everything in life, Jeffress said.

America’s founders understood that and enshrined it as the First Amendment, which says, “Congress shall make no law respecting an establishment of religion, or prohibiting the free exercise thereof,” Jeffress said.

Jeffress believes that when judging by the First Amendment, church lockdowns imposed during the COVID-19 pandemic were unconstitutional.

“We ought to be good citizens in our city. We went online for a few weeks to be cooperative,” the preacher said, referring to the government directive that required closing churches due to the pandemic caused by the CCP (Chinese Communist Party) virus.

However, allowing casinos, strip clubs, movie theaters, and marijuana stores to be open while the churches were closed goes against the First Amendment, Jeffress said. There is no constitutional guarantee for such businesses to be open, but there are safeguards for churches, he added.

“Churches have special protection that was given to us by our forefathers. And we can’t afford to allow that to be sacrificed.”

Jeffress called lockdowns of churches “the marginalization of Christians and other people of faith during the pandemic.”

“I think that’s just a prelude to what’s going to happen,” he said.

“There’s great evidence that the IRS right now is being weaponized by the Biden administration to go after Christian groups,” Jeffress said, citing the case of the Texas-based Christians Engaged which was initially denied tax-exemption status.

The IRS initially denied the group’s tax exemption request because, according to the tax agency, “certain Bible teachings are ‘affiliated with the [Republican] Party and candidates.’”

That denial was subsequently reversed following a public outcry and extensive media coverage by The Epoch Times and other outlets.

Jeffress said he preached recently that Christian believers who are persecuted for righteousness would be given a special blessing.

He thinks that there is some kind of persecution going on right now but those who undergo it are being persecuted for their opinions or preferences.

“When you take a stand for Jesus Christ and suffer negative, negative consequences, that is what persecution is about,” Jeffress explained.

According to the Bible: “The first cases of persecution were not beheadings. It started with a verbal admonishment from the government, fine, followed by the lie, beatings, imprisonment, and finally execution. … Persecution is always incremental,” the preacher said.

Jeffress said that he is not afraid of being killed for openly expressing his faith. “I get to go to heaven early.”

“I think as long as we fear God and God alone, it gives us the courage to stand firm, but I really think Christians have got to quit being passive.”

“[Christians] need to try to slow down the immoral direction we’re headed in. One way we do that is through the leaders that we elect into office. … There are no perfect candidates, but [there are] those whose espouse those biblical values that we believe in.”

The preacher said that he is a supporter of former President Donald Trump, who in his opinion was “the most pro-life, pro-religious liberty, pro-Israel president in the history of America.”

People are longing for leadership like that offered by Trump, Jeffress said.

Mark Tapscott contributed to this report.

Original link : Believers Should Stand Up for Truth Amid Pressure on Religion: Preacher