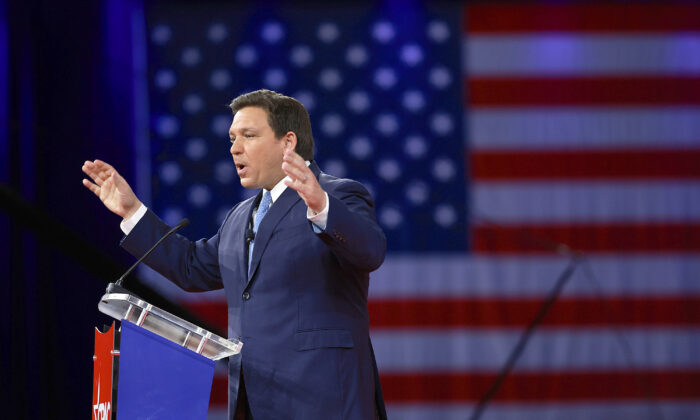 New polling about the governor’s race in Florida backs up what political analysts have been saying for months—Florida Gov. Ron Desantis seems on track for a strong reelection in November.

And that could bode well for the popular governor if he decides to later make a run for president, they said.

A poll released Feb. 24 (pdf) by the University of North Florida (UNF) shows the Republican incumbent has a job-approval rating of 58 percent. The poll also shows him ahead of his top two Democrat challengers for governor, U.S. Congressman Charlie Crist and Nikki Fried, the state’s commissioner of agriculture and consumer services. The poll, conducted by the university’s Public Opinion Research Lab, showed DeSantis ahead of Crist, considered his biggest competition, by 21 points, and ahead of Fried by 23 points.

A RealClear Politics average of polls since August 2020 has DeSantis beating Crist by 8.8 percent.

“The Republican Party, I think, has the wind at their back coming up with 2022 midterms,” political analyst Peter Bergerson told The Epoch Times. Bergerson is a professor of political science at Florida Gulf Coast University and has been studying the politics of Florida and the United States for 50 years.

“I can’t help but think DeSantis is in a really safe place,” Bergerson said.

Since filing in November, DeSantis, a 43-year-old Harvard-educated lawyer who served in Iraq in the Navy, has raised $4.6 million, according to required candidate financial reports filed with the Florida Department of State’s Division of Elections.

“I think at this point, they [Crist and Fried] are way too far behind. For Nikki Fried, I think [lack of] name recognition is one of the key issues for her, and just the opposite for Charlie Crist,” Bergerson said.

Crist was first elected to the Florida Senate in 1992. He served as a Republican governor of Florida from 2007 to 2011, then registered as an Independent. He was defeated in his bid to hold on to his job as governor by Republican Rick Scott in 2014. Now, Crist serves as a Democrat congressman in Pinellas County, a beach community on the Gulf of Mexico. Scott now serves as a U.S. senator.

Some voters will hold Crist’s record of party changes and long-time office-holding against him, Bergerson predicted. Crist has not responded to requests for comment.

For “voters who’ve been interested in a change, looking at DeSantis and saying, ’Let’s look at something new or different, some new ideas,’ Charlie Crist doesn’t fit that. He’s had his day, so to say,” Bergerson said.

“And Nikki Fried—I guess she’s well known within the Democratic Party organization. But beyond that, the Department of Agriculture is just not a stepping stone [to governor]. It’s just not a position to garner public attention.”

The UNF survey results seem to confirm that. Only 31 percent of respondents said they approved of the job Fried is doing as commissioner of agriculture and consumer services, and 49 percent said they didn’t know. Crist’s job approval wasn’t measured in the poll.

“DeSantis approval is up by 10 percentage points from last time we asked, back in October of 2020,” said political science professor Michael Binder, faculty director of UNF’s polling lab. “Fried approval has remained largely steady since our February of 2020 poll, and the ‘don’t knows’ have gone down some, but folks still seem to be pretty unsure.”

Crist, 65, filed in May to challenge DeSantis. Since then, his financial reports show contributions of almost $3 million. Fried, who bills herself as “Something New for Florida” has raised almost $1.5 million. Fried has not responded to requests for comment.

“A lot of Democratic voters still doesn’t know who they would vote for, so I would expect that lead to narrow between now and November,” Binder said.

Florida State Sen. Annette Taddeo of Miami has raised a little more than $352,000 since registering in May 2019 to take on DeSantis. She had been Crist’s running mate as candidate for lieutenant governor in 2014. The Columbia-born businesswoman’s website says she hopes “to make history and break barriers as the first female and Latina governor of Florida.” Most of the other candidates have reported that they have received no contributions.

Officially, 20 challengers have registered as candidates hoping to unseat DeSantis. In the field are 11 Democrats, two Republicans, one Independent, one write-in candidate, and five listed as having “no party affiliation.”

Voters registered as Independent are part of the state’s Independent Party. A write-in candidate must file a candidate oath with the Florida Division of Elections and doesn’t have to pay filing fees. He or she won’t have his or her name on the ballot, but space is provided on the ballot for voters to write in a name.

Of registered Democrats participating in the UNF survey, 27 percent said Crist was their top choice among their party’s candidates, and Fried was second with 19 percent. Taddeo and candidate David Nelson Freeman each received 4 percent.

A surprising 38 percent of Democrats surveyed said they didn’t know who they’d choose, and 6 percent refused to say.

“These [undecided] folks likely won’t make up their minds for a while, so this will be a pretty muddled picture until later in the summer,” Binder said.

“This suggests Republicans might be trending toward a larger turnout advantage,” Binder said.

And Bergerson agrees, because historically, Democrat turnout is 15–20 percent lower in “off-year” elections, when there isn’t a contest for president.

“That’s one of the advantages that DeSantis has,” Bergerson said.

But with so many registered Independents in Florida, those voters can make or break a major party candidate’s chances.

“They’re the real key to who’s going to win in November. But I really see DeSantis [winning] at this stage,” Bergerson said. “Things can happen and change, but he’s clearly in the driver’s seat.

“One of the key elements in a competitive election is how unified the party is. If the Democrats have a knockdown battle or fight over the who’s going to be the nominee … that may be hard to heal in time to defeat or come close, even, to defeating DeSantis.”

But DeSantis’s advantages are stacked even higher.

“DeSantis has so much money. He has the office. He has the budget and when he travels around the state, the local organizations don’t know whether to play the state anthem or ‘Here Comes Santa Claus,’” Bergerson said.

He was referring to DeSantis’s habit of criss-crossing the state several days a week, popping up for appearances in communities large and small, to pass out money for projects, often for education or infrastructure, from the Florida budget that’s flush with cash. For the 2022–23 fiscal year, DeSantis has asked lawmakers to consider a $99.7 billion budget, with total reserves exceeding $15 billion.

“He’s really spread the wealth,” Bergerson said. And that’s built for him an “overwhelming public response … whether it’s teachers’ groups, environmental groups, infrastructure groups. He’s had the good fortune of a lot of money in the state, and he’s spread it out.”

Having a strong reelection would put DeSantis in a good position, should he decide to pursue a presidential run in 2024, Bergerson added, especially if Republicans in the state Legislature present a unified front as they wrap up their annual regular session on March 11.

“I think that is his goal, to establish himself as one of the top candidates for the presidential campaign and election in 2024,” Bergerson said. But “his success in reelection is going to be predicated on a unified party, and I think that … one of the things that will come out of the Legislature is unification.”

Though DeSantis has dismissed rumors he’s considering a run for president, political insiders count it as a foregone conclusion.

At the Conservative Political Action Summit in Orlando from Feb. 24–27, 2,754 attendees participated in a poll (pdf) on their presidential picks, of which 54 percent were male, and 65 percent were from the South. The mean age was 47 years.

When asked about a primary held today and given a list of 19 potential Republican candidates, 59 percent chose former President Donald Trump and 28 percent chose DeSantis. In third place was former Secretary of State under Trump, Mike Pompeo, with 2 percent. All three men spoke at the conference to deafening cheers.

When the list was modified to exclude Trump as a candidate, DeSantis claimed 61 percent of the vote, with Pompeo and Donald Trump, Jr. tying for second with 6 percent. The former president’s son was not listed in the group that included his father as a choice.

In that group, Mike Pence was one of seven potential candidates, garnering 1 percent of the vote. Pence got the same percentage when in the theoretical race including Trump.

The way DeSantis spoke at the conference made it clear to political analyst Susan McManus, professor emeritus at the University of South Florida, that he’s focused now only on retaining his spot as Florida’s top executive. And that’s a good move.