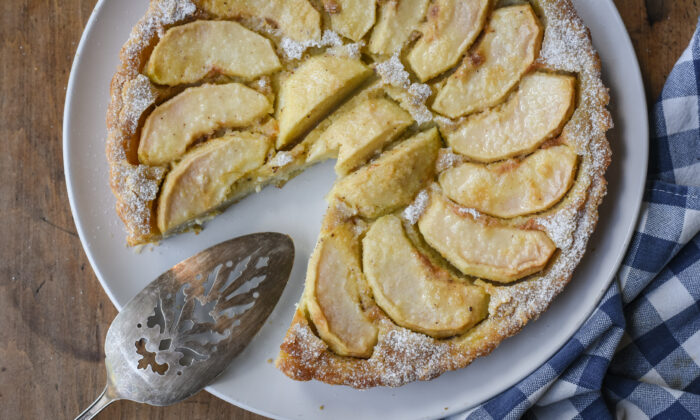 Famous for its bucolic villages, lush apple orchards, and storied dairy farms, Normandy is a northern French region that produces exceptional apples, Calvados, butter, and crème fraîche—all of which collide in the delicious Tarte Normande.

This iconic regional dessert features a sandy, buttery crust filled with juicy apple wedges, nestled in a Calvados-infused custard. It’s an easy, rustic recipe for your baking repertoire, best made in the fall, when apples are in season.

From the best apples to pick to the perfect homemade pâte sablée, here’s what you’ll need to make it at home.

Calvados, an apple brandy from Normandy, is one of the region’s most renowned exports. amber-hued elixir is distilled from dry cider, produced with blends of only specially-grown Normandy apples—making it an AOC (Controlled Designation of Origin) product.

Beloved for its sweetness and smooth layers of fruit and oak, Calvados became the drink of choice for U.S. and Canadian regiments that settled into the region after the storming of the D-Day beaches and the Battle of Normandy during World War II. se episodes assuredly contributed to carrying the fame of this distinct, locally produced brandy across the Atlantic.

Many Calvados distilleries, damaged during the war, were reconstructed and modernized to meet increasing demand—which to this day hasn’t decreased. Large-scale producers, such as Boulard and Père Magloire, have now gained international recognition, and their bottles can easily be found in most liquor stores across North America.

Calvados can be enjoyed as an apéritif or as a digestif. It’s also widely used in Normandy’s regional cuisine to flavor sauces and desserts—one of which is the Tarte Normande.

As with most apple tarts or cakes, you should look for baking or cooking apples, which aren’t as juicy as eating varieties and won’t turn mushy once baked. In the United States, good options for baking include Honeycrisp (perhaps my favorite), Melrose, Jonagold, Braeburn, Gala, Golden Delicious, Northern Spy, and Granny Smith.

This tart recipe requires 3 large or 4 medium apples. You can opt for one single variety or a mix. Try combining tart Granny Smiths with sweeter Honeycrisps for a nice balance of textures and flavors.

A final ingredient that makes this tart filling so special is the crème fraîche. Widely used in northern French cooking, and especially in Normandy, crème fraîche is a thick, unpasteurized, soured cream. It’s similar to sour cream, but has a higher fat content (usually 30 to 40 percent) and a richer, rounder, and slightly less tangy flavor.

Although it wasn’t easy to find until a few years ago, crème fraîche has now become common in grocery stores in the United States and Canada. You can usually find it next to the sour cream. Ideally, look for crème fraîche packaged in a glass pot, which generally indicates a better quality, rather than plastic tubs. If possible, look for one labeled “Crème Fraîche de Normandie.”

If you can’t get your hands on crème fraîche or would like a more affordable option, you can substitute with heavy cream (35 percent milkfat) or half-and-half. This will make the custard less rich, but won’t affect the overall texture once baked.

crust for a Tarte Normande is known as a pâte sablée, translating to “sandy crust.” This type of crust is traditionally used in France for tart shells meant to encase soft fillings, such as pastry creams and fruits. crust is buttery and not too sweet, with a lovely sandy texture, yet it’s sturdy enough to hold the filling of cream and apples.

A pâte sablée usually needs to be baked “à blanc” (blind-baked) before being filled, but this Tarte Normande recipe is an exception. unbaked crust is simply filled with the apples and custard, and the assembled dessert bakes in the oven all at once.

If you’re short on time, a store-bought shortcrust works just fine, but I find that making your own pastry crust from scratch really brings this tart from just good to exceptional.

This tart is best enjoyed the day of making.

For the Crust (Pâte Sablée)

For the Filling (Crème Normande)

Prepare the pâte sablée: In a large bowl, combine the all-purpose flour, salt, and sugar. Add the cubed butter and use your hands to mix the ingredients together, rub them between your palms until you get a crumbly, sandy texture with pea-size bits of butter still visible. Add the egg yolks and combine until the dough comes together into a ball. Wrap in plastic wrap and chill for 30 minutes.

Butter and flour a 9-inch or 10-inch tart pan (ideally with a removable bottom).

Take the pâte sablée out of the fridge. Place it between two large sheets of parchment paper and roll it out to a 1/4-inch thickness. Transfer the crust into the tart pan, gently pressing it in to line the bottom and sides. Don’t worry if the crust tears—you can easily patch it together and press it to seal. Trim the edges all around and poke the bottom evenly all over with a fork. Place the crust in the fridge while you prepare the filling.

Preheat the oven to 350 degrees F with a rack in the middle.

Prepare the filling: In a large mixing bowl, whisk together the eggs and 1/2 cup sugar. Whisk in the almond flour, vanilla extract, cinnamon, crème fraîche (or heavy cream), and Calvados. Set aside.

Peel and core the apples. Cut each apple into 12 wedges.

Remove the crust from the fridge. Arrange the apple wedges at the bottom of the crust in a circular pattern. Pour the filling over the top. Sprinkle the remaining 2 tablespoons of sugar evenly over the top.

Bake in the preheated oven for 50 to 55 minutes or until the crust is golden. Enjoy warm or at room temperature.