Minestrone in October: An Ode to the Autumn Garden 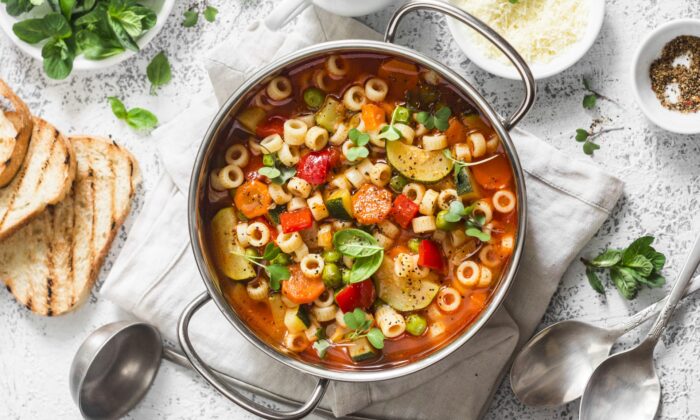 “Do I taste pears in this?”

My neighbor was, shall we say, intrigued. Yes, I did put chunked-up pears in the minestrone we were having on a chilly, fusty early-October night at my place, Owl Feather Farm. I have two century-old homestead pear trees at the farm; they produce palm-sized hard pears, sweet but tempered with a bit of astringency. I had also tossed in shishito peppers, lemon and cherry juice, bull kelp sea salt, cilantro, lima beans (ha!), green beans, leftover smoked brisket, and a few other bits and bobs.

“It’s really good,” she allowed, passing her bowl over for more. “I’ve never heard of pears in soup.”

Most people think of minestrone as a half-dozen cans of supermarket stuff tossed in a pot. But its older and richer heritage is a provincial garden leftovers soup-stew that not only is exceptionally luscious, but also provokes appreciation of the wonders of a garden. It goes like this:

Head out into the autumn garden, poke around, see what’s left from summer. Pick that.

In the kitchen, prep it, dump it all in a Dutch oven with some olive oil, sauté a while, and add vegetable stock, pasta, and perhaps sausage. Simmer till done.

Put the tureen on the table, garnish with a few herbs, and serve with country bread.

Would-be chefs get frustrated when they ask for my “recipe.” It’s above. “So, how much lemon juice?” “Some.” “How long does it cook?” “A while.” But I can elaborate a bit.

re’s also nothing that absolutely must be in minestrone. No tomatoes? Oh, well. I almost never use onion and garlic: My wife has an anaphylactic allergy to alliums. Forgot to get pasta? Boost the potatoes. No sausage? Looks like it’s vegan night.

enjoyment of making minestrone is manifold. First of all, the carnival of colors, shapes, and textures in the pot is an artistic masterpiece. Few stews taste as hearty and complex as this impromptu vegetable slumgullion. At the table, it’s delightful to ask guests to guess what’s in it—way more fun than charades. And if you did the job right, you made enough to have leftovers for tomorrow; soups and stews are usually better the second day.

But before any of those rewards comes the simple wonder of exploring the garden at a time when most (even me) have kind of forgotten about it. When I went out there on that early-October day, I discovered that my midsummer green beans (Provider) had set a new crop in September, providing a quart of fresh green beans. y were smaller, gnarled, bent and broken, but eminently edible. And the old August pods I overlooked had all birthed large, lavender bean seeds for shelling.

I found a handful of carrots hidden behind golden chard that had grown huge, and I did selective thinning in the chard. Most of my lima beans were already dry, ready for winter storage, but a dozen or so, hidden in the fading foliage on the trellis, yielded about 30 large white fresh beans. Sungold vines, drooping with damp, had four little tomatoes at ground level. Four fall zucchini hung from their trellis, yellowing with the chill but still fine. My white corn had a dozen small, secondary ears just starting to dry—perfect.

All this I had somehow overlooked.

October harvest stroll is thus an expedition into the beautiful persistence, diversity, and hardiness of nature. We put these seeds in the ground and ask them to grow food for us and, by God, that’s what they do. My last 70-degree day was weeks ago, nighttime temps are mid-40s now, but the garden perseveres. I hadn’t been out here for a while, but not because my plants gave up. Look in the mirror for that.

Our bargain with the plant world is not a transaction, but a sacred relationship. It pleases me that so much of what I grow is the Western Hemisphere’s gift to humanity—corn, beans, and squash, plus potatoes, tomatoes, chiles, and more. When these beings keep trucking along to feed my household, and I turn their essence into minestrone, we are honoring each other.

This unbreakable thread has sewn daily life going back millennia. Each October, I rediscover the light the sun shines on it.

Gather, or buy at a farmers market, some or all of the following:

Meanwhile, brown sausages in a separate skillet. Cool and slice, then add them to the soup tureen. Spice as desired, and simmer for 1 to 2 hours, adding pasta in the last 15 minutes. Serve with chopped cilantro or basil and rustic bread.

Pezou : Minestrone in October: An Ode to the Autumn Garden