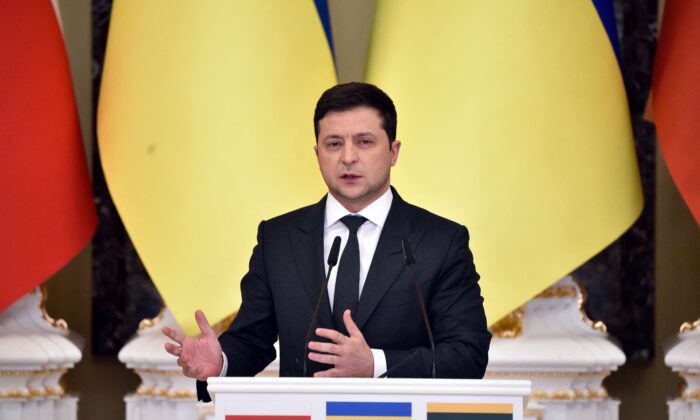 Zelensky told foreign reporters at a briefing in Kyiv that holding lower-level technical negotiations in Belarus, Russia, or Ukraine would be “unconstructive,” calling instead for a “meeting of leaders,” potentially in Jerusalem.

He took a positive view of Bennett serving as a mediator between the warring sides and called for Israel to be among the security guarantors for Ukraine.

“We are generally positive,” Zelensky said of Bennett’s role as peace broker. “I am personally positive about anyone’s mediation … But I don’t call Bennett ‘anyone’ because I think he can play an important role,” adding that, “it is very good to have such mediation.”

Bennett, acting at the request of Ukraine, met with Russian President Vladimir Putin last Saturday and has since spoken by phone several times with both the Russian leader and Zelensky.

Moscow has said little about Bennett’s mediation efforts, but Putin struck an optimistic note on the several rounds of technical negotiations between Ukrainian and Russian delegates in Belarus, saying he saw a positive shift in the discussions.

“There are certain positive developments there, as the negotiators from our side reported to me,” Putin said on Friday at a meeting with his Belarusian counterpart Alexander Lukashenko, according to Russian state news agency Tass.

Putin did not provide further details, saying only that he would “talk about all of this later.”

High-level talks held on Thursday in Antalya, Turkey, between the foreign ministers of Russia and Ukraine ended with no progress on a 24-hour ceasefire to allow for the safe evacuation of civilians from besieged cities.

Commenting on the several rounds of Russia-Ukraine technical negotiations that have taken place thus far, Zelensky said no substantial progress had been made because of “ultimatums” from the Russian side that were unacceptable to Ukraine.

Moscow has demanded that Ukraine cease military action, pledge never to join NATO and enshrine neutrality in its constitution, acknowledge Crimea as Russian territory, and recognize the separatist-controlled regions of Donetsk and Luhansk as independent states.

Zelensky earlier signaled openness to a compromise with Putin on some of his key demands for halting the offensive in Ukraine, including on NATO membership and the status of the contested territories, but he insisted his forces would not capitulate.

“I’m ready for a dialogue, but we’re not ready for surrender,” Zelensky said in an interview with ABC News on Tuesday.

On Saturday, Zelensky said he was “happy” with a signal from Russia that it was ready to start talking in earnest and “not throwing ultimatums.”

“Our diplomats are working and discussing the details of the agenda that may be between us and Russia,” he added.

Zelensky said thousands of people have been killed in Ukraine by Russian forces, which he blamed on “the fact that Russia has not once confirmed the possibility of a meeting.”

“And this is their responsibility entirely,” he said.

Kremlin spokesperson Dmitry Peskov said on Friday that the conflict would end when the West took action on Russia’s concerns, namely the killing of civilians in the pro-Russia separatist-controlled regions in Ukraine and NATO’s eastward expansion.

“Let’s hope. That needs to be done. Then it will all end,” Peskov said.

Putin describes the invasion as a “special military operation” to disarm Ukraine’s military and topple its government, a dual objective he’s called “demilitarization and denazification” that he claims is needed to protect Russians living in separatist-controlled parts of eastern Ukraine from “abuse and genocide.”

Ukrainian leaders and their Western allies say that’s all a pretext for Russian territorial expansion and subjugation of Ukraine, which Putin has suggested isn’t worthy of statehood.

The Russia-Ukraine conflict has driven 2.6 million from their homes, according to the U.N., with NATO Secretary General Jens Stoltenberg describing the exodus as “Europe’s fastest-growing refugee crisis since the Second World War.”