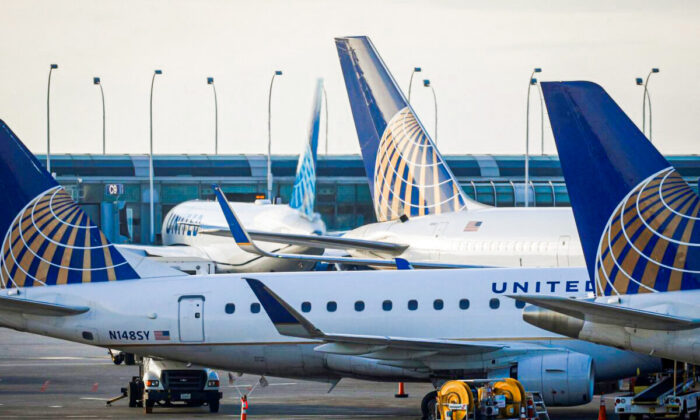 United Airlines plans to let workers who declined to get a COVID-19 vaccine return to work, according to a missive obtained by The Epoch Times.

Unvaccinated employees can return to their positions on March 28, according to the memorandum, which was sent to workers on Thursday morning.

Kirk Limacher, vice president of human resources at United, said the change was due to the plunge in COVID-19 cases and COVID-19-related hospitalizations across the country in recent weeks. Many states and cities are lifting COVID-19 restrictions, and the U.S. Centers for Disease Control and Prevention dramatically eased its masking guidance, he noted.

“These changes suggest that the pandemic is beginning to meaningfully recede. As a result, we’re confident we can safely begin the process of returning our RAP employees to their jobs,” Limacher wrote.

United imposed a COVID-19 vaccine mandate for all of its 67,000 U.S. employees in the fall of 2021. It was the first U.S. airline to impose a company-wide mandate.

Workers could apply for a religious or medical exemption, but if such an exemption request was deemed reasonable—known as RAP in company parlance—the worker was placed on unpaid leave indefinitely instead of being allowed to continue in their job. The company later let some of these workers switch jobs instead of going on unpaid leave.

United CEO Scott Kirby also told workers “to be very careful about” requesting accommodations and said workers were putting their jobs on the line if they did.

The policy triggered a lawsuit, which is ongoing. In a ruling in February, a federal court said United’s mandate was “actively coercing employees to abandon their convictions.”

United ended up firing more than 200 workers for not getting a vaccine.

United declined to say whether the workers who were fired will be offered their jobs back.

Limacher said workers with an approved exemption request would get an email on Thursday with instructions on how to return to “active status” or how they would be transitioned from their role if they were allowed to work in a position that does not deal with customers.

“Of course, if another variant emerges or the COVID trends suddenly reverse course, we will reevaluate the appropriate safety protocols at that time,” he said.

The United official also alleged the vaccination policy was successful at preventing COVID-19 infections and severe cases of the disease.

“Our vaccinated employees have been significantly less likely to lose their lives to COVID,” he said, adding that vaccines continue to provide “high protection.”

Limacher did not mention how all three of the vaccines that received regulatory clearance in the United States have performed much worse against virus infection and worse against severe COVID-19 since the Omicron variant of the virus became dominant in the country in late 2021.