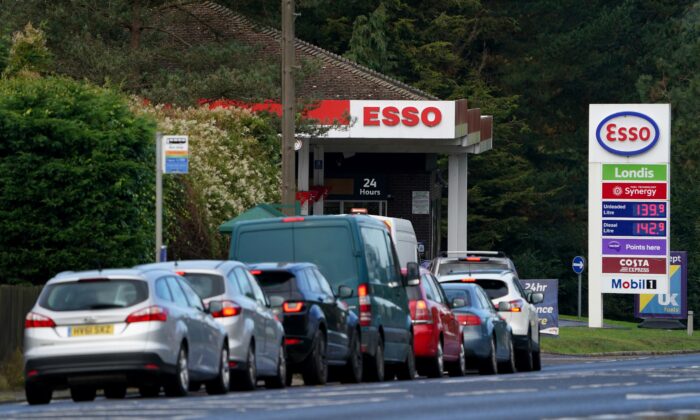 peak fell the day after BP and Tesco closed some filling stations due to problems with fuel delivery.

Across the UK, people spent a fifth (20 percent) more at petrol stations in the past two weeks, compared with the two weeks before, the bank said.

Sept. 24 saw the bank’s debit card users spend 125 percent more on fuel than on the same day in 2019, and the highest amount since records began in April 2014.

East Midlands saw the biggest increase in fuel spending in the last two weeks compared with the two before, up 24 percent, followed by the West Midlands (23 percent), and the south east (22 percent).

This was followed by Yorkshire and Humber (20 percent). Wales and Scotland saw the lowest increases, at 14 percent and 15 percent respectively, followed by London and the south west on 19 percent.

However, the bank said there were signs that demand for fuel was easing. Week-on-week spending across the UK has fallen by almost a third (31 percent), with the number of transactions down 20 percent.

Only three regions, all in the south and east, saw drops of less than 30 percent. Londoners’ spending on fuel fell just 20 percent, the lowest of any region, followed by the south east (21 percent) and east of England (25 percent).

amount spent on cards on household energy in the past two weeks also increased, by 24 percent, as a combination of colder weather and soaring energy prices gripped the UK.

Spending on energy is now 14 percent higher than the same two weeks in 2020, the bank’s figures show.

Philip Robinson, payments and fraud and financial crime director at Lloyds Bank, said: “After an initial incredible spike in late September where spending on fuel was the highest we’ve ever seen it, over the past week card payments at petrol stations have fallen, particularly in northern and western parts of the UK.

“However, household energy spend continues to increase, 13 percent in the last week alone, driven by rising prices and colder months.

“With this in mind, now is a very good time to sit down and reflect on your personal finances ahead of Christmas 2021.

“Budget effectively and give yourself a clear idea of what you can afford this festive season.”