Russia-Ukraine War Would Have Never Happened Under Trump: Rep. Hice 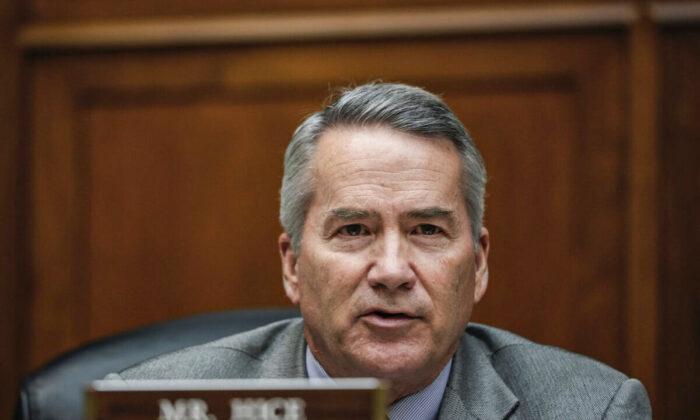 Russia’s war invasion of Ukraine would never have happened if former U.S. President Donald Trump were still in office, according to Rep. Jody Hice, (R-Ga.)

In an interview with NTD, the Georgia congressman pointed towards what he called the current “weak leadership” in the White House which he said was in part to blame for the conflict.

Hice, who is a candidate in the 2022 Georgia secretary of state election, also said he believes that Russian President Vladimir Putin may well use this time of war to “take advantage” of the United States and other western nations.

“I’m not surprised from the perspective that the only reason this is happening is because we have such enormously weak leadership in the White House,” Hice said.

“This would never ever, ever be happening if Trump were in the White House. And I think we all know that,” he said.

Hice’s comments come shortly after Trump himself told Fox News that Russia’s invasion of Ukraine is “truly is a crime against humanity” that “never would have happened” if he were still in office.

Trump took aim at Putin, who he said has “got a very big ego,” adding that if the Russian president were to end his military invasion of Ukraine now, “it’s going to look like a big loss for him. Even if he takes a little extra territory.”

“I know him well [Putin] and this is not something that was going to happen but let’s see what happens, let’s watch,” Trump said of Putin.

He said that the pair had had a “very strong conversation” during his time in office and that “president Putin understood,” that there would be no invasion of Ukraine. Trump, however, declined to go into details about the alleged conversation.

Trump also took aim at the Biden administration’s “horrible” and “incompetent” withdrawal from Afghanistan last year as well as sky-high inflation and the ongoing migrant crisis in the United States, stating that world leaders like Putin “no longer respect” the nation and that this was in part to blame for Russia’s invasion of neighboring Ukraine.

Elsewhere, Hice told NTD that Russia “is not a friend” of the United States and yet “this administration has been acting as though this is someone that we can negotiate with, that we can work with. And it’s just simply not the case.”

The Republican lawmaker said that the Biden administration has given Moscow more power by continuing to allow it to supply other European nations with oil while the U.S simultaneously “forsakes” its own energy independence.

“It makes no sense whatsoever. But this administration has done so,” Hice said, adding that the Kremlin needs to be kept under a close watch.

“They are trying to undermine the United States. So look, they are an enemy, they need to be treated as an enemy. And this administration seems to have such a dismal foreign policy that now it’s coming back to bite us,” Hice said.

Biden announced a ban on all Russian oil imports to the United States earlier this month amid mounting pressure from lawmakers to isolate Russia’s economy.

The United States, along with multiple other western nations, has also levied a number of strict sanctions on Russia’s financial systems and individuals with close ties to Putin’s inner circle.

The Pentagon also said on March 13 that it is working to send additional military equipment and weapons to Ukraine’s military to help the country fend off attacks from Russia. Over the weekend the U.S. president authorized an additional $200 million to the embattled country.

Last week, the Senate passed a bill containing approximately $13.6 billion in emergency funding to support the people of Ukraine, split between humanitarian and security assistance.

So far, however, the United States has declined to implement a no-0fly zone over Ukraine, despite multiple requests from Ukrainian officials to do so. Putin has warned that he would view any country that declares a no-fly zone over the country as a participant in the “armed conflict.”