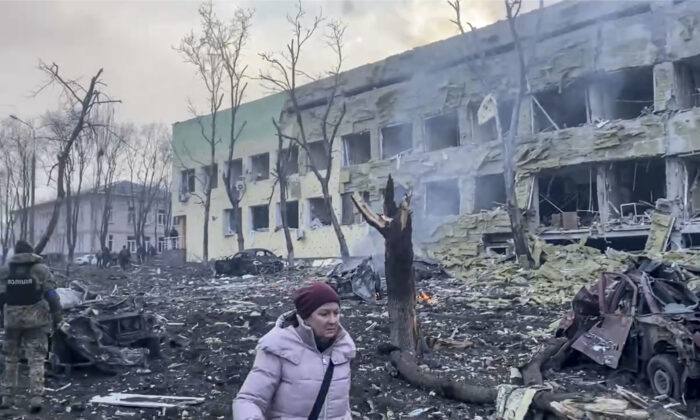 Russia asserted Thursday that the claim from Ukraine that Moscow forces were responsible for the bombing of a maternity hospital in the port city of Mariupol was “fake news.”

He said that Russia had said in a statement on March 7 that the hospital in Mariupol “has been turned into a military object” from which Ukrainian radicals were firing.

The Ministry of Foreign Affairs of Russia shared Polyanskiy’s statement on its Twitter page.

The March 7 statement was delivered by Russian Representative Vassily Nebenzia at the U.N. Security Council.

“Ukrainian radicals show their true face more distinctly by the day,” Nebenzia said. “Locals reports [sic] that Ukraine’s Armed Forces kicked out personnel of natal hospital #1 of the city of Mariupol and set up a firing site within the facility.”

Russia has also previously denied targeting civilians or civilian infrastructure as part of its campaign in Ukraine.

“Mariupol. Direct strike of Russian troops at the maternity hospital. People, children are under the wreckage,” Zelensky wrote on Twitter. “Atrocity! How much longer will the world be an accomplice ignoring terror?”

After the strike, the Mayor of Mariupol, Vadym Boichenko, called for a no-fly zone to be imposed over Ukraine.

“Today I am asking the global community for help. Close the sky over Ukraine. Our will has not been broken, we will fight to the end,” Boichenko said in a video message posted to Telegram. “We have motivated soldiers and officers who defend our homeland. But today we need support.”

Ukrainian authorities said at least 17 people were injured in the attack. Police in Ukraine later released footage showing the damage at the site.

Hours before the hospital was hit, Russian Foreign Ministry spokeswoman Maria Zakharova said that “in Mariupol, the Ukrainian national battalions, having expelled the staff and patients from the maternity hospital, equipped combat positions in it.”

The U.S. Department of State announced Wednesday that Secretary of State Antony Blinken and Ukrainian Foreign Minister Dmytro Kuleba, discussed on a call about “coordinated efforts to provide additional security assistance and humanitarian support to Ukraine in the face of Russia’s unprovoked and premeditated invasion and, in particular, its unconscionable attacks harming population centers.”

Blinken “reiterated the United States’ steadfast support for Ukraine’s sovereignty and territorial integrity,” according to the statement.

Jack Phillips and Isabel van Brugen contributed to this report.