Renewables Now Make Up a Third of Australia’s Energy 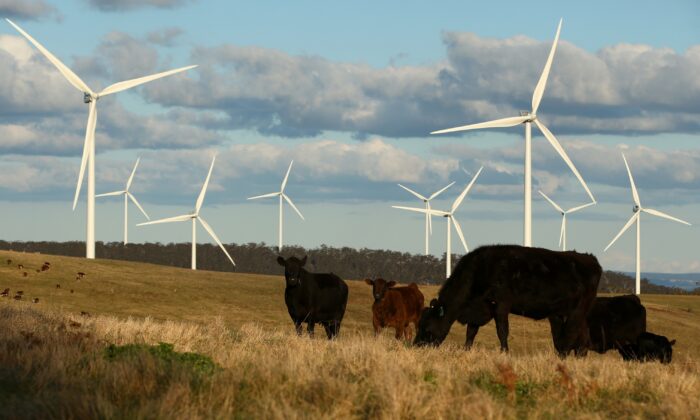 Australia has set a new record for renewables output for the fifth year in a row, with solar, wind, and hydropower now making up around a third of Australia’s energy mix.

It coincides with 2021 being a record year for solar uptake, with more than one in four Australian homes decorated with rooftop solar panels.

Over the last year, renewables generated 32.3 percent of the energy across Australia’s National Electricity Market—an area that covers every jurisdiction except for Western Australia and the Northern Territory.

Minister for Industry, Energy and Emissions Reduction Angus Taylor said investment into the sector had made Australia a global leader in bringing down carbon dioxide emissions.

“Last year $7.4 billion or $284 per person was invested in renewable energy in Australia,” Taylor said. “This puts us ahead of countries including Canada, Germany, Japan, France, China and the United States on a per person basis.”

It is also expected the first half of 2022 will contain a number of new major projects that will either be announced or begin construction in the renewables sector.

Taylor said the government had put a focus on ensuring energy stability amid the transition.

“As record high levels of renewable energy come online, the Morrison Government’s energy policy is focused on three things: ensuring the grid is stable; prices remain low, and emissions continue to come down. The key to this is the balance between renewables and on-demand reliable power.”

Renewables, together with gas, has so far driven down energy prices in most jurisdictions in Australia.

However, while solar panels have become one of the cheapest forms of power, concerns have grown over the possibility of slave labour in solar supply chains, particularly as 90 pecrent of Australian solar panels are made in China.

The federal government is implementing a number of measures to keep the lights on amid the rapid uptake of more solar and wind power.

It comes as two major coal-fired power stations have announced early retirement, including Yallourn power station in Victoria and Australia’s biggest, and most recently the Eraring coal plant in New South Wales.

Both in Australia and internationally, gas has been lauded as coal’s replacement and the key to supporting intermittent forms of energy generation, thanks in part to gas’ ability to fire up quickly when needed.

To this end, the government has backed numerous gas projects, including the Port Kembla gas import terminal, the Tallawarra B gas generator, and the Kurri Kurri gas plant—all in New South Wales.

The federal government has also outlined plans for a capacity mechanism that will pay certain generators to remain available on standby to guarantee a minimum baseline energy threshold is reached—even if that power ends up not being utilised.

The purpose of the mechanism is to incentivise and reward power stations—such as coal, gas, battery, and hydro—who can produce power when the system needs it the most, unlike solar and wind power which, though cheaper, is not always available.

However, although gas power produces less than half the amount of carbon dioxide as coal, the use of fossil fuel has angered environmental groups who have called to cut carbon dioxide emissions altogether.

To reduce dependence on gas, large swathes of energy storage are required, with only a relatively small number of battery projects completed or underway in Australia.

Batteries on the Big Grid

However, experts have cautioned against the use of batteries on the electrical grid to store energy generated by renewables.

Professor of Engineering at the University of Melbourne and electrical grid expert Iven Mareels explained that a large number of expensive batteries would be required to sufficiently back up power for extended periods of time.

“Batteries can never do what a coal fired power station can… not even close,” Mareels told The Epoch Times.

While Mareels agreed with the shift from coal power in order to reduce emissions, he pointed to the fact that batteries also posed their own environmental issues, along with the minerals used within them not being renewable.

“Let’s not forget that recycling is not that easy, and the lifespan of stationary batteries is only about half of that of a coal fired power station at the very best,” he said.

Mareels said that pumped hydro storage provided the solution to this problem. This method involves storing energy by pumping water into reservoirs at higher elevations, which can later be released and accessed through traditional hydropower turbines.

Compared to batteries, although the project is estimated to cost between $3.8 billion and $4.5 billion—around 25 times as much as a typical grid-scale battery—the storage capacity will be 1,400 times greater.