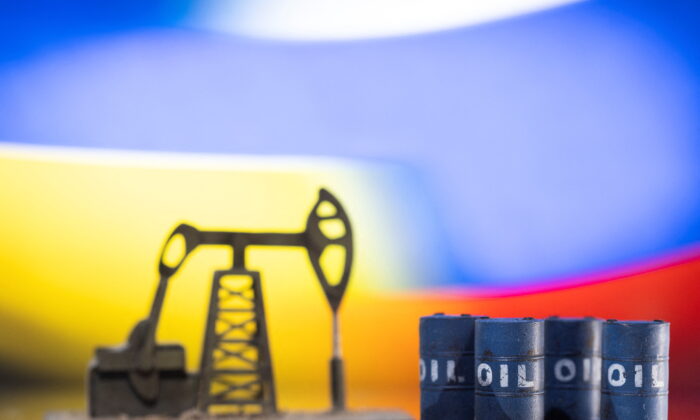 Recession odds are slowly rising now that crude oil prices are firmly above $110 per barrel, and the Ukraine-Russia military conflict is impacting global financial and commodities markets.

In the last couple of months, stagflation had been the talk of Wall Street as analysts and economists debated rampant price inflation weighing on growth prospects at home and abroad. But the fallout of Moscow’s invasion of Ukraine has exacerbated many of the challenges that were already threatening the global economy on the other side of the pandemic.

“The difficulty when we get a shock event like this—which has so many consequences, of course humanitarian, economic, and monetary in terms of policy—the uncertainty levels go up,” he said in a research note.

For now, the consensus among financial analysts is that current market pressures, particularly higher consumer and producer prices, could slow U.S. economic growth this year.

In a new report, Fitch Ratings warned that escalating inflation troubles could derail the global economic outlook in 2022.

“Recent inflation outturns have been higher than expected and the price outlook is uncertain. Inflation is a dynamic process and can be self-reinforcing,” wrote Brian Coulton, chief economist at Fitch, in the report. “Various factors could keep core inflation high throughout 2022. Global energy price shocks related to the Russia-Ukraine crisis exacerbate risks.”

He added that this could force the Federal Reserve and the Bank of England (BoE) to accelerate interest rates “to neutral or restrictive levels.” The fed funds rate could climb to 3 percent by the end of the year, Coulton noted.

According to the CME FedWatch Tool, the market has priced in a 25-basis-point hike at next week’s crucial Federal Open Market Committee (FOMC) policy meeting. Many Wall Street firms are penciling in at least five rate adjustments this year.

Tighter credit conditions and a spike in long-term U.S. Treasury yields could take a toll on the gross domestic product (GDP), with growth projected to drop to 0.5 percent or below in 2023, Coulton anticipated.

A CNBC Rapid Update survey of 14 forecasts suggests that U.S. economic growth could endure the myriad of bearish factors, although the GDP might take a modest hit in the coming quarters.

In the aftermath of the invasion, the U.S. growth outlook is expected to be 1.9 percent in the first quarter, up from 1.5 percent in the February study. The second-quarter GDP is projected to expand 3.5 percent, down from the previous estimate of 4.3 percent. The third and fourth quarters are slated to see GDP bumps of 3.1 percent and 2.5 percent, respectively. This is down from last month’s forecast of 3.4 percent and 2.6 percent, respectively.

“This is an almost textbook example of an energy shock accelerating the slowdown of economy that is already in a fragile state.” Siomades told The Epoch Times. “Add to that the inflationary pressures we have and the Fed’s limited options and you have a perfect storm brewing.”

He also believes that the U.S. economy might experience “a dose of” stagflation and recession either later this year or in early 2023.

“After the recession we will revert to the same growth trajectory of the Obama years—jobless recovery, anemic growth only this time, thanks to this administration, continued elevated levels of inflation,” Siomades argued.

Not everyone believes the U.S. economy could contract sometime over the next 12 to 18 months.

ING’s Chief International Economist, James Knightley, expects “a relatively benign outcome” for the United States in the next couple of years.

That said, some are going as far as calling for an economic downturn, including Bill Gross, the Pimco co-founder.

Speaking in an interview with CNBC on Thursday, Gross purported that the Fed waited too long to raise interest rates, and now it will be hard to mitigate even a tepid recession, noting that central banks are “stuck in a low-interest-rate world.”

Larry Summers, the former U.S. Treasury Secretary, averred that the next recession will be triggered by the Fed because it was “way behind the curve,” prompting the institution to tighten monetary policy aggressively.

“The next recession probably has ‘mistaken monetary policy’ written all over it,” Summers told Bloomberg TV. “The difficulty of getting a soft landing where we both brought inflation down and we avoided recession was always very difficult. With $110 oil it’s that much more difficult.”

However, the U.S. economy may not need to wait for a recession because it is already here, warns Bob Bilbruck, the CEO at Captjur, a strategic and development services firm.

“We are in a recession now,” he told The Epoch Times. “A period of temporary economic decline during which trade and industrial activity are reduced, generally identified by a fall in GDP in two successive quarters. In the last two quarters, global GDP has declined, and it has actually been declining since late 2020. U.S. GDP has also been declining. Wall Street is not talking about that because Wall Street and economics are very separate.”

Looking overseas, the chief prognostication is that the Ukraine-Russia conflict will most impact Europe because of its dependence on energy commodities.

Barclays lowered its growth projections for Europe this year from 4.1 percent to 3.5 percent. Even with the European Central Bank (ECB) choosing to delay its monetary tightening campaign, RBC Economics trimmed its 2022 euro area GDP forecast by 0.8 percentage points to 2.8 percent.

“Soaring commodity prices and risk aversion in financial markets are the main contagion channels, implying a global stagflationary shock, with Europe being the most exposed region,” Barclays economists, led by Christian Keller, stated in a report. “While Europe looks more vulnerable than the U.S., and the U.K. is somewhere in between, China seems least exposed.”

Overall, the current economic environment could face enormous pressure by the shrinking supply of a wide range of commodities that extend beyond crude and crops.