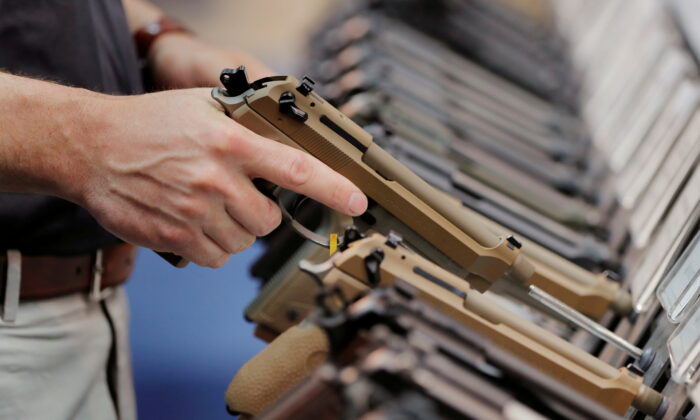 A group of U.S. gun-makers and a firearms distributor on Nov. 22 filed a joint motion to dismiss a claim by the Mexican government that the companies are liable for allegedly contributing to a surge of firearms flowing unlawfully into the country.

It comes after Mexico on Aug. 4 filed a suit in Massachusetts federal court accusing some of the nation’s biggest firearm makers, including Smith & Wesson, Sturm, Ruger & Co, and Glock, of “persistently supplying a torrent of guns” to drug cartels in Mexico.

“Defendants are fully on notice of the massive trafficking of their guns into Mexico,” the lawsuit states, accusing the firearms makers of creating a “public nuisance” in Mexico.

Andrew Lelling, a former U.S. attorney for Massachusetts, filed the motion on Monday on behalf of the U.S. gun makers, while former U.S. solicitor Noel Francisco did so on behalf of Smith & Wesson.

attorneys argue in their 58-page joint motion that Mexico lacks Article III standing to bring the case, meaning that the purported injury stems from a third-party not before the court—or criminals in Mexico—according to Law.com International.

y also argue that the half-dozen U.S. gun-makers and firearms distributor are shielded by federal law, the U.S. Protection of Lawful Commerce in Arms Act. law, enacted in 2005, protects firearms manufacturers and dealers from being held liable when crimes have been committed with their products.

motion states that Mexico’s claim “does nothing more than put a new coat of paint on a recycled and discredited set of claims.”

attorneys also argue in their motion that the Mexican government failed to allege facts showing that their clients’ business practices are the “proximate cause” of the injuries inflicted by criminal groups in Mexico, Law.com reported.

“At bottom, this case implicates a clash of national values,” the attorneys wrote. “Whereas the United States recognizes the right to keep and bear arms, Mexico has all but eliminated private gun ownership.”

“Mexico can, of course, impose gun control within its own borders. But in this case it seeks to reach outside its borders and punish firearms sales that are not only lawful but constitutionally protected in the United States,” they added.

“Defendants nevertheless assert that a U.S. statute, concededly drafted with only U.S. domestic concerns in mind, extinguishes this claim for injuries that defendants foreseeably, and repeatedly, cause in Mexico. We are confident that the Court will agree with us that the U.S. statute does no such thing,” he added.