Financial Repression: Are Policy-Makers Really Doing All y Can to Fight Inflation? 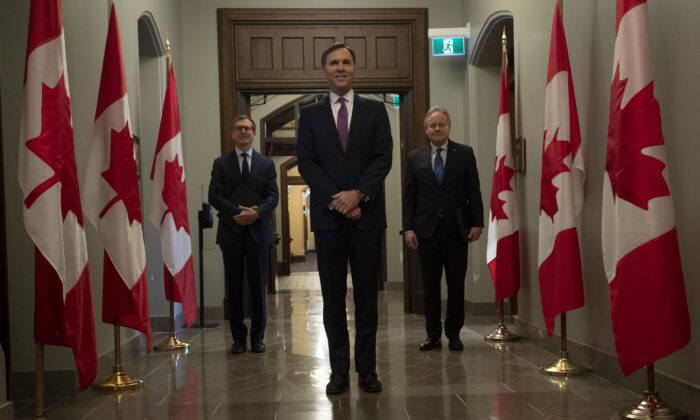 Governments are taking on massive debt loads to manage the pandemic. Raising taxes would choke off a tenuous recovery, not to mention being politically unpopular.

Enter financial repression, which generally means ways in which the government effectively gets the private sector to pay down the public debt.

This is accomplished by the central bank keeping interest rates near zero and buying bonds, which floods the economy with money. central bank attempts to generate inflation this way by enticing businesses and households to borrow and spend, thus raising demand relative to supply. With higher inflation, money is less valuable and the debt is cheaper to pay back.

Financial regulation also assists in financial repression. Banks are stress-tested to see if they can withstand adverse shocks to the economy. Regulators require them to buy and hold “safe assets” such as government bonds. This in turn helps keep interest rates low and potentially raises inflation.

Canada’s annual inflation rate rose to 4.7 percent in October, up from 4.4 percent in September—the highest since February 2003.

Financial repression can pump up the stock market and lift house prices to levels that don’t reflect economic fundamentals and income levels, said Kevin Page, founding president and CEO of the Institute for Fiscal Studies and Democracy at the University of Ottawa, in a piece for Policy Magazine.

“When central bankers and treasury officials think about our policy path before and after COVID, it is likely they use terms like financial repression and fiscal dominance. Sadly, the two come together,” said Page, who previously served as Canada’s first parliamentary budget officer.

Fiscal dominance, according to Page, happens when fiscal policy, in this case the government’s deficit spending, takes over from monetary policy to stimulate the economy when interest rates are near zero and the central bank has nearly exhausted all its tools.

“A natural political bias toward budgetary deficits becomes a defended fiscal policy when interest rates are low. nasty problem is that the future is uncertain and interest rates can rise,” Page said.

“I’m skeptical of any suggestion that the bank is coordinating with [the Department of] Finance to deflate away the debt,” Ambler told Pezou. “I don’t think the Bank of Canada is consciously trying to lend a helping hand to the government, which seems to be still intent on running large deficits.”

“Certainly a byproduct of what they’re doing is that with negative real interest rates, … and a high inflation, it’s going to run down the real value of outstanding government debt. So they are helping the government out, even if that’s not their primary intention.”

Ever since the financial crisis that hit in late 2008, financial repression and fiscal dominance have taken hold, Page added.

Prior to the financial crisis, the Bank of Canada’s key policy rate was above 4 percent. Post-2008, it never managed to get higher than 1.75 percent and has now been at 0.25 percent since the start of the pandemic.

It’s a similar story for the United States, with the comparable federal funds rate that never quite reached 2.5 percent post-financial crisis. It was above 5 percent prior to the financial crisis but now sits in a range of 0 to 0.25 percent.

Deutsche Bank’s head of thematic research Jim Reid said in a note to clients that heavy financial repression will be required to manage the bloated debt loads. This means that if real interest rates do move higher, central banks will have no choice but to cut rates to avoid big losses in the stock and housing markets and prevent heavily indebted nations from seeing their interest expenses spike.

In a July interview with Market NZZ, economist and financial historian Russell Napier said governments are engineering a period of financial repression to get rid of elevated debt levels just like after World War II.

“It creates politically directed growth, and it creates inflation. For politicians, it’s the magic money tree.”

In the longer term, Napier said, inflation will come from growth in the money supply—if it keeps growing at around 10 percent annually, 4 percent inflation will become the norm.

belief that inflation is transitory largely stems from bottlenecks on the supply side, which are expected to eventually get resolved. But when the economy fully opens up and people can spend their accumulated savings as they wish on goods and services, that will raise the velocity of money—how quickly money is changing hands for buying goods and services.

As Inflation, Oil Prices Keep Rising, Is Stagflation Next for Canada?

“If velocities start to pick up, then we’re going to look at demand-driven inflation. Right now, we’re maybe not in serious trouble. We’re going to be in a bit more trouble,” Ambler said.

Bank of Canada said on Oct. 27 that it expects inflation to remain elevated into 2022 before easing down to around the 2 percent target late in that year.

Inflation has proven to be a lot less transitory than the BoC initially believed, but the central bank signalled that the first interest rate hike could now be coming sooner, by mid-2022.

“If I were to criticize the bank, I think I would criticize the Fed [U.S. Federal Reserve] even more—both of them sort of said that they’re willing to tolerate a period of higher inflation,” Ambler said.

Peter Schiff, chief economist and global strategist at Connecticut-based Euro Pacific Capital, told Pezou that there will always be inflation, as governments are the world’s biggest debtors.

“ government has a vested interest in inflation, because inflation wipes out the value of its liabilities,” he said.

BMO’s base-case forecast is for the BoC to raise rates by 1.5 percent eventually, starting in mid-2022.

That would put the bank’s overnight rate target at 1.75 percent, which, if accompanied by inflation at 2 percent, would imply a slightly negative real rate, Ambler noted.

“Financial repression … is the worst way of dealing with government debt and actually works against the proper ways of addressing fiscal problems,” said Mark Thornton, a senior fellow at the Mises Institute, in 2015.

He noted that better ways of addressing debt include cutting government programs and fostering deregulation and privatization to raise economic growth.

“ effects of financial repression cause economic harm throughout the productive sectors of the economy including workers, savers, entrepreneurs, retirees, and pensions,” he added.

“It hurts the insurance industry that protects our lives, homes, health, and property. economic beneficiaries include the big banks and Wall Street, the national government itself, and certain large corporations.”

Pezou : Financial Repression: Are Policy-Makers Really Doing All y Can to Fight Inflation?