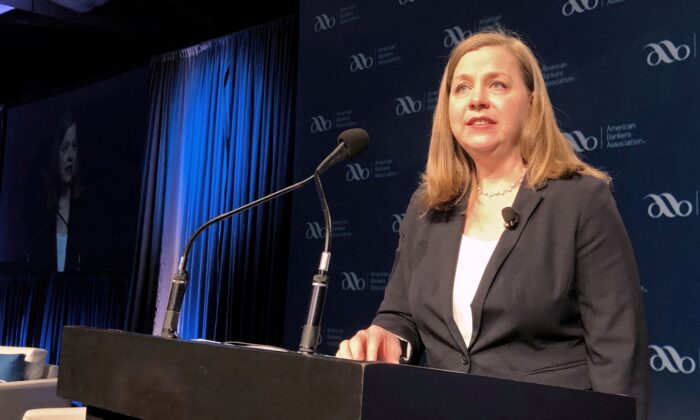 Federal Reserve Governor Michelle Bowman on Wednesday said she would be “very comfortable” with beginning to withdraw some of the U.S. central bank’s crisis-era support for the economy as soon as next month, citing concerns about inflation and asset bubbles.

Fed’s purchase of Treasuries and mortgage-backed securities has been a centerpiece of its COVID-19 response, credited with staving off a financial crisis by pushing down on borrowing costs and encouraging investment and hiring as the economy reopened.

“I am mindful that the remaining benefits to the economy from our asset purchases are now likely outweighed by the potential costs,” Bowman said in an address to South Dakota State University. “Provided the economy continues to improve as I expect, I am very comfortable at this point with a decision to start to taper our asset purchases before the end of the year and, preferably, as early as at our next meeting in November.”

Last December, with millions of Americans still unable to find jobs, the Fed promised to keep buying $120 billion of bonds each month until the economy had made “substantial further progress” toward full employment and the Fed’s 2 percent inflation goal.

Last month, Fed Chair Jerome Powell signaled the end of that program was approaching. Inflation, which has been running far above 2 percent for months, had met the “substantial further progress” test, and the economy was one “decent” jobs report away from meeting that standard on the employment front, he said.

Bowman on Wednesday said she sees progress on jobs but no return to pre-pandemic levels of employment any time soon. Even as businesses offer higher wages and signing bonuses, she said, they are having trouble recruiting employees.

Millions of women and older workers have left the labor force during the pandemic, data shows, and the longer people stay out of work, the harder it will be for them to come back—a problem the Fed’s monetary policies are ill-suited to address, she said.

Meanwhile, rising wages may start to push up on inflation, adding to price pressures from supply-chain bottlenecks that could last longer than previously expected, she said. Rising house prices are hurting lower-income households and bankers have begun voicing concern about potential house-price bubbles, she said.

Fed’s asset purchases “have essentially served their purpose,” Bowman said, saying that continuing them carries worrisome risks. “In particular, I am concerned that our asset purchases could now be contributing to valuation pressures, especially in housing and equity markets,” adding that maintaining the Fed’s easy monetary policy could now “pose risks to the stability of longer-term inflation expectations.”