Europe’s Central Bank to Speed up End to Economic Stimulus 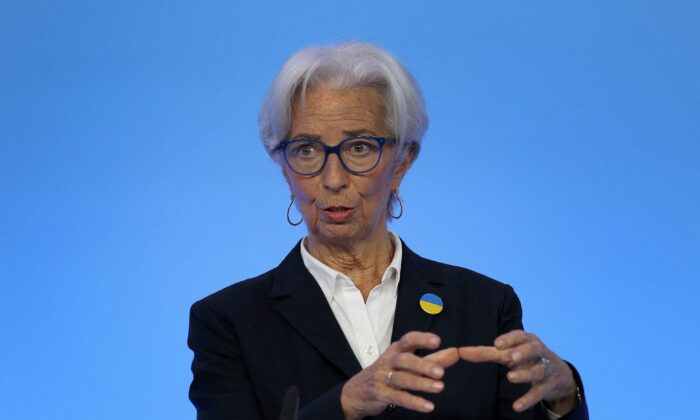 The European Central Bank (ECB) said Thursday that it will make an early exit from its economic stimulus efforts as it combats record inflation that threatens to go ever higher as energy prices soar during Russia’s war in Ukraine.

The move was a tough choice because the invasion also has exposed Europe to a potential hit to economic growth. But the ECB chose higher inflation as the bigger threat, surprising many analysts who had expected no change in the bank’s roadmap for the coming months.

The bank was keeping its options open and could modify its stimulus exit depending on what happens with the economy, President Christine Lagarde said. That’s hard to answer right now because of massive uncertainty over the impact of the war.

“The prospects for the economy will depend on the course of the Russia-Ukraine war and on the impact of economic and financial sanctions and other measures,” she said.

“At the same time, other headwinds to growth are now waning,” Lagarde said, pointing to signs some of the supply bottlenecks that have held back business are showing “signs of easing.”

She said the impact of sharply higher energy prices could be “partly cushioned” by savings that people couldn’t spend during the pandemic restrictions.

The bank’s 25-member governing council headed by Lagarde decided to end its bond purchases in the third quarter. Previously, it said it would taper them off to 20 billion euros ($22 billion) per month by the last three months of the year and continue them as long as needed.

The purchases aim to keep borrowing costs low for companies and promote business investment and hiring.

But the bank did not move up its schedule for a first interest rate increase, dropping a promise that rates would go up shortly after the end of bond purchases. Instead it said only that rate changes will take place “some time after” the end of the purchases and “will be gradual.”

During a news conference, Lagarde refused to be drawn out on whether an interest rate increase was possible this year. After the end of the bond purchases, “it can be the week after and it can be months after,” she said, depending on inflation and growth.

“The ECB has signaled that it is more concerned about a further sharp rise in inflation than the negative shock to demand which will result from the war in Ukraine,” said Andrew Kenningham, chief Europe economist at Capital Economics.

Inflation in the 19 countries that use the euro currency is running at an annual 5.8 percent, the highest since statistics started in 1997, and is expected to keep climbing in the coming months. The bank sees inflation running well above its 2 percent target throughout this year but falling to 2.1 percent next year.

The European bank is still behind the U.S. Federal Reserve, which is set to raise interest rates several times this year, beginning with a modest hike next week after inflation came in at a 40-year high of 7.9 percent.

The recovery from the pandemic recession has lagged in Europe, which only reached pre-pandemic levels of output at the end of last year, well behind the United States, where stimulus and support spending was higher.

The European bank’s road map includes ending a 1.8 trillion euro purchase program this month and transferring some of the purchases to an existing program that will now end sooner than planned. The bank used the purchases to support the economy through the coronavirus pandemic.

It had been assuming that high oil and gas prices and pandemic supply bottlenecks were temporary. But that equation is changing as inflation seems to be both worse and longer lasting than originally expected. Fears of oil and gas cutoffs have sent already high energy prices even higher, leading to predictions that inflation can only go higher in the short term.

On the other hand, economic growth is at risk in the eurozone because Europe is more exposed to the war on the continent and is more dependent on Russian oil and gas than the United States and China.