Euro Rises 0.5 Percent Against the Dollar Ahead of ECB 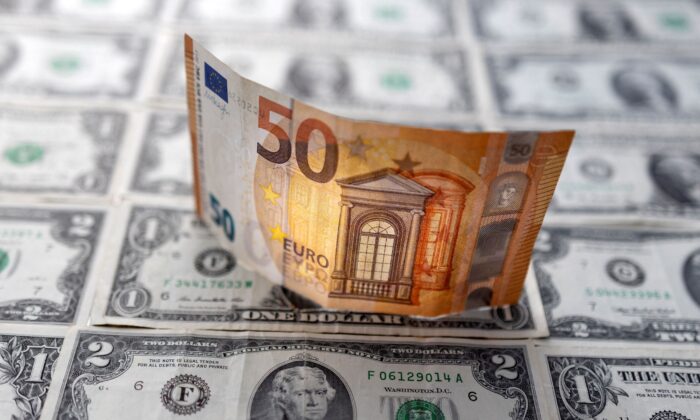 LONDON—The euro and other European currencies edged up on Wednesday ahead of this week’s central bank meeting.

“European currencies have been under heavy pressures for the past couple of weeks and some of these valuations have begun to look stretched,” said Jane Foley, head of FX Strategy at Rabobank in London.

“Yesterday’s news that the EU is considering issuing debt to finance energy and defence spending underpinned the euro and helped trigger the better tone in euro and European currencies,” she added.

But analysts also said the euro is unlikely to rise much while there is so much worry about the war in Ukraine spreading.

Other European currencies such as Poland’s zloty and Hungary’s forint rebounded from record lows against the euro, both supported also by their central banks’ sharp interest rate hikes on Tuesday.

The European Central Bank meets on Thursday but amid the spectre of stagflation, money markets expected policymakers to delay rate hikes until late in the year.

The U.S. dollar against a basket of currencies including the euro was 0.35 percent lower at 98.764, just below a 22-month peak touched on Monday.

Analysts said expectations for a Federal Reserve rate hike and safe haven demand suggested the U.S. dollar will unlikely give up too much ground.

In the meantime, commodity is expected to dominate the FX trades, ING analysts said.

Fighting in Ukraine has not abated and oil prices are climbing again on news of a U.S. ban on Russian oil imports.

Some commodity currencies such as Australian and kiwi dollar—eased from recent peaks amid fears war-driven surges in energy, grains and metals could crimp long-term demand.

Cryptocurrencies rose on speculation the White House may soften its combative approach to digital assets. Bitcoin was last up 9.5 percent at $42,165 and ether was up 7.2 percent to $2,763.

Original link : Euro Rises 0.5 Percent Against the Dollar Ahead of ECB