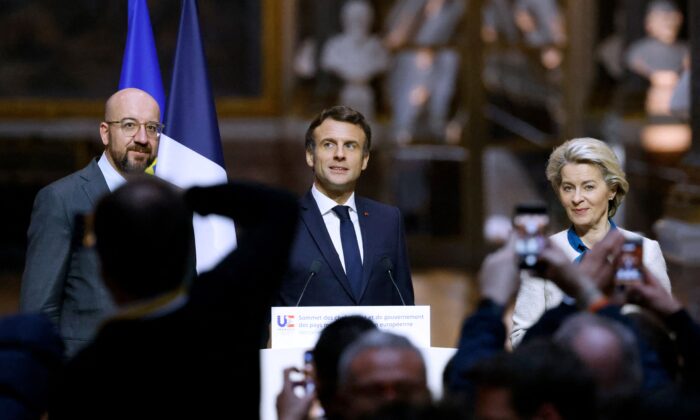 VERSAILLES, France—The European Union is ready to impose even harsher economic sanctions on Russia and might give Ukraine more funds for arms to fight Moscow’s invasion, leaders decided in two days of talks in France, but drew a line on allowing Kyiv rapid access to the bloc.

Ukraine, a former Soviet republic that has sought to join the EU and NATO, has called for fast-track accession to the EU since the Feb. 24 invasion.

“I understand very well that, when you fight courageously like Ukraine does, you would want much more. But we are not a side to this conflict,” French President Emmanuel Macron told a press conference.

German Chancellor Olaf Scholz said it was “right” to hand the request of Ukraine, as well as that of Moldova and Georgia, for prospective membership to the bloc’s executive European Commission for a detailed legal analysis.

Allies of Ukraine in eastern Europe were disappointed.

“I wish Ukraine would get the candidate status now … it was not possible today, but we will come back to this issue,” said Lithuanian President Gitanas Nauseda.

EU countries must agree unanimously to let in a new member and accession usually takes years of complex negotiations, as well as requiring candidates to meet strict criteria from economic stability to rooting out corruption and respecting human rights.

The bloc’s top diplomat, Josep Borrell, said the EU might offer another 500 million euros ($550 million) to Ukraine to buy arms. The bloc also promised to help rebuild the country of 44 million people once the war ends.

“Nothing is off the table, nothing is taboo, we’ll do whatever we deem necessary to stop Russia,” Macron said after talks in the Versailles palace near Paris.

Scholz confirmed: “We agreed to continue to push forward on those sanctions that have an immediate effect on Russia’s chances for economic development.”

Like EU enlargement, sanctions require unanimity of all member countries. The 27 members have yet to find common ground on how much further to go in cutting business ties with Russia.

As a next step, the West was curbing Russia’s rights at the the World Trade Organization.

The leaders also turned inwards to discuss ways to reduce their economic exposure to Moscow. They decided to cut imports of Russian energy by 2027, spend more on defense and increase own food production.