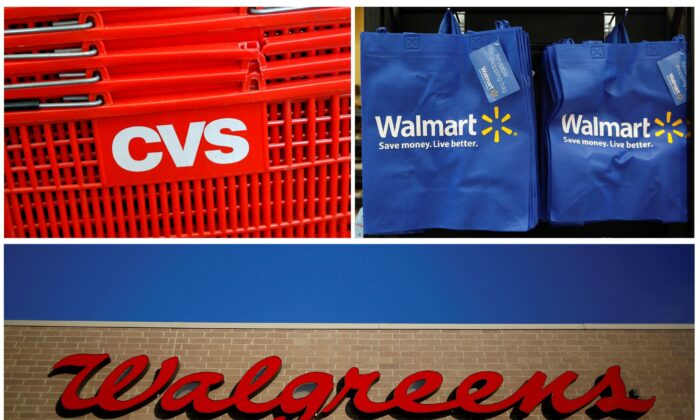 Three of the nation’s largest chain pharmacies, CVS, Walgreens, and Walmart, contributed to an opioid crisis in two Ohio counties, a federal jury found on Tuesday.

three pharmacy chains sold and dispensed large quantities of the pain pills in Lake and Trumbull counties, and in doing so, helped fuel an opioid crisis, the jury found. Some of the pills purchased legally ended up being sold on the black market.

ir actions caused hundreds of overdose deaths and cost each of the two counties about $1 billion, the counties’ attorneys said.

A federal judge will decide in the spring how much the pharmacies must pay in damages to the two Ohio counties.

CVS and Walgreens say they plan to appeal the judgement, while Walmart has yet to comment on the matter.

It was the first time pharmacy companies had completed a trial to defend themselves in a drug crisis that has killed a half-million Americans over the past two decades.

counties were able to convince the jury that the pharmacies played an outsized role in creating a public nuisance in the way they dispensed pain medication into their communities.

“ law requires pharmacies to be diligent in dealing drugs. This case should be a wake-up call that failure will not be accepted,” said Mark Lanier, an attorney for the counties.

Attorneys for CVS, Walgreens, and Walmart argued that they had policies in place to curb the flow of pills when concerns arose. y also maintained that if they received suspicious orders from doctors, they would alert authorities.

Attorneys for the Ohio counties described the jury’s decision as a “milestone victory.”

“For decades, pharmacy chains have watched as the pills flowing out of their doors cause harm and failed to take action as required by federal law,” they said.

“As plaintiffs’ own experts testified, many factors have contributed to the opioid abuse issue, and solving this problem will require involvement from all stakeholders in our health care system and all members of our community,” CVS spokesperson Mike DeAngelis said in a statement.

Walgreens spokesperson Fraser Engerman said the company believes the court erred “in allowing the case to go before a jury on a flawed legal theory that is inconsistent with Ohio law.”

“As we have said throughout this process, we never manufactured or marketed opioids nor did we distribute them to the ‘pill mills’ and Internet pharmacies that fueled this crisis,” Engerman said in a statement. “ plaintiffs’ attempt to resolve the opioid crisis with an unprecedented expansion of public nuisance law is misguided and unsustainable.”

Centers for Disease Control and Prevention (CDC) said on Nov. 18 that more than 100,000 Americans have died of drug overdoses in the 12-month period ending in April—a record high, and up 28.5 percent over the previous year,.

CDC in its report listed fentanyl as the leading drug to cause overdose fatalities. category of synthetic opioids, which includes fentanyl, involved 64 percent of all overdose deaths. Fentanyl is a synthetic opioid that has long been blamed for an escalating overdose death rate in the United States.

“As we continue to make strides to defeat the COVID-19 pandemic, we cannot overlook this epidemic of loss, which has touched families and communities across the country,” he said.