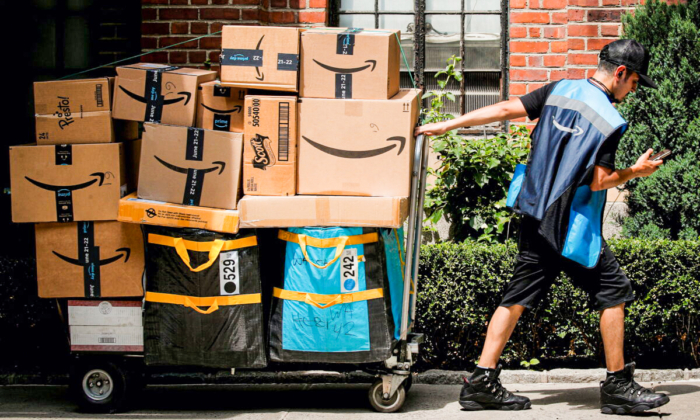 Amazon employees worldwide will be holding a strike against the company on Black Friday, Nov. 26, one of the busiest shopping days of the year, to demand fair pay for workers, among other things.

Make Amazon Pay, a coalition that represents over 200 million workers and activists across the planet, is organizing Friday’s protest and has released a set of demands that employees are placing on both the company and the governments of the countries it operates in around the globe.

strikes are set to take place at factories, warehouses, and outside corporate offices across the world, including sites in California,  Germany, Ireland, France, and Spain.

In a statement, the coalition noted that Amazon CEO Jeff Bezos is “the world’s richest person”—although Bloomberg’s billionaire’s index currently places him at number two behind Tesla’s Elon Musk—and that the tech giant became a “trillion-dollar corporation” during the COVID-19 pandemic while its warehouse employees “risked their lives as essential workers, and only briefly received an increase in pay.”

coalition also took exception to Amazon’s ever-expanding carbon footprint, which it says is now larger than two-thirds of all countries in the world, while the company’s growing delivery and cloud computing businesses, the coalition says, are further fueling climate change.

“Like all major corporations, Amazon’s success would be impossible without the public institutions that citizens built together over generations,” the coalition said. “But instead of giving back to the societies that helped it grow, the corporation starves them of tax revenue through its world-beating efforts at tax dodging. In 2019, Amazon paid just 1.2 percent tax in the U.S., the country it is headquartered in, up from 0 percent the two previous years.”

Amazon defended its tax record in a January 2020 blog post, stating that it had over $1 billion in “federal tax income expense” in 2019 and had also paid $2.4 billion in other federal taxes, including employment taxes, and $1.6 billion in state and local taxes.

Make Amazon Pay published a list of 25 demands on its website that include raising wages in line with the increasing wealth of the corporation and extending paid sick leave, ending all forms of casual employment and self-employment or contractor status, offering unions access to Amazon worksites, committing to zero emissions by 2030 and paying taxes in full by “ending tax abuse through profit shifting, loopholes and the use of tax havens, and providing full tax transparency.”

coalition also called for the immediate reinstatement of all workers who were fired from the company for “speaking up about issues concerning the health and safety of Amazon workers and customers; engaging in efforts to organize fellow workers; or due to selective enforcement of internal policies.”

“Amazon is not alone in these bad practices but it sits at the heart of a failed system that drives the inequality, climate breakdown and democratic decay that scar our age,” the coalition wrote. “ pandemic has exposed how Amazon places profits ahead of workers, society, and our planet. Amazon takes too much and gives back too little. It is time to Make Amazon Pay.”

Pezou has contacted a spokesperson from Amazon for comment.

planned strike comes shortly after Bezos revealed he is donating $100 million to the Obama Foundation, the largest individual contribution the Chicago-based nonprofit organization has received to date.

As part of the gift, Bezos has asked for the plaza at the Obama Presidential Center to be named the John Lewis Plaza. Lewis, a civil rights icon, died at the age of 80 on July 17, following a diagnosis of advanced pancreatic cancer in December 2019.

“Freedom fighters deserve a special place in the pantheon of heroes, and I can’t think of a more fitting person to honor with this gift than John Lewis, a great American leader and a man of extraordinary decency and courage,” said Bezos. “I’m thrilled to support President and Mrs. Obama and their Foundation in its mission to train and inspire tomorrow’s leaders.”

Meanwhile, Amazon drivers are set to receive nearly $60 million in withheld tips after the company reached a settlement with the Federal Trade Commission (FTC) earlier this month over tips that it allegedly illegally withheld from drivers over a 2 1/2-year period between 2016 and 2019.