A Growing List of Companies Take Action to Support Ukraine, Cut Off Russia 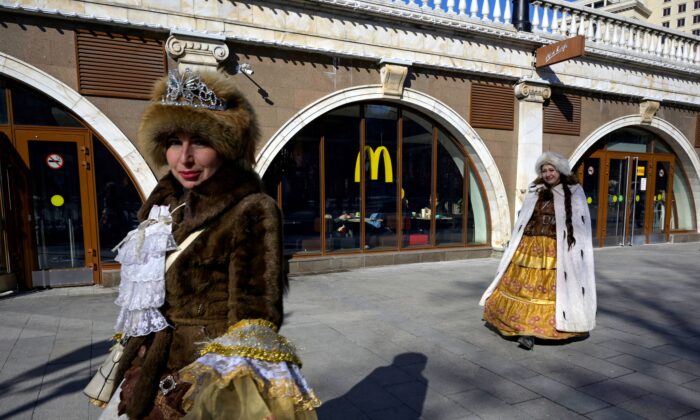 The list of organizations pulling out of Russia, closing stores, or putting a halt on their trade with the country increases day by day. As of March 11, more than 340 companies have withdrawn from Russia, according to data collected by Yale professor Jeffrey Sonnenfeld and his research team at the Yale Chief Executive Leadership Institute. The group notes that many companies have not cut ties with Russia, for varying reasons.

Among the companies that have paused their dealings, the motivation may be partly due to public opinion about the war. More than 75 percent of Americans have demanded that corporations cut business relationships with Russia in an outcry against the invasion of Ukraine, according to a Morning Consult survey. Thus far, the ruble has sunk deeply in value, losing 40 percent of its value against the dollar. The Russian stock market shuttered on Feb. 25 and has yet to reopen.

Even as companies large and small seek ways to discredit Russia’s actions, the long-term effect remains in action, according to Luke Fitzpatrick, a guest lecturer at the University of Sydney in cross-cultural management and the pre-MBA program. “One thing is for sure,” Fitzpatrick told The Epoch Times. “The country has experienced a severe economic crisis.”

For some of these companies, the changes have significant repercussions, especially for energy companies; for others, the impact will be less apparent. Russia is a major global producer of gas and oil. McDonald’s has about 850 locations in Russia, and most of them are owned by the company. In the semiconductor industry, Russia accounts for less than 0.1 percent of global chip purchases.

JPMorgan estimated that Russia’s economy could shrink, dropping 20 percent from the first quarter to the second quarter, and falling around 3.5 percent during 2022. “These sanctions will almost certainly hit their mark on the Russian economy, which now looks headed for a deep recession and the imposition of capital controls,” JPMorgan’s team explained.

Smaller operations are falling in step, too, many for reasons ranging from social cause to personal ties. Marina Mirchevskaya is the founder of CreativelyBox, which offers boxes filled with supplies needed to have a paint party and create works of art.

“Being born in the former Soviet Union, and having many friends and family from Ukraine, I felt a strong personal connection to the conflict in Ukraine and wanted to do more,” Mirchevskaya told The Epoch Times. She started by launching a special-edition paint box and will be donating 15 percent of each sale from the line to the Save the Children Ukraine Crisis Relief Fund. “My goal is for people to come together to offer compassion and show support for the Ukrainian people while creating something beautiful,” Mirchevskaya added.

Lemon.io, a marketplace with staff in Ukraine which connects European freelance developers to startups, took its stand weeks before Russia began is full-scale invasion into Ukraine. “Three founders promised to support all its staff and programmers, paid a two-month advance on salary, and started paying developers twice a month,” Elena Fabrykant, marketing manager at Lemon.io, told The Epoch Times. After taking the lead, the company watched other IT businesses do the same and look for ways to support Ukraine-based employees.

After the war officially broke out, Lemon.io took further action. “All the revenue in February and March will go to the Ukrainian army,” Fabrykant said. The company also donated to the “Povernys Zhyvym” (Back and Alive) fund. This charity has been connected to the military in Ukraine since 2014 and provides auxiliary equipment for the military, specialized software, drones, training, and other supplies. At Lemon.io, “Two company employees joined the armed forces—they will get their salaries as promised,” Fabrykant said.

The company has international clients that indirectly support Ukraine by continuing to do business with Lemon.io, according to Fabrykant. “While the military men protect our sky and land, the business executives do their best to protect their employees, work—and help the army,” Fabrykant said.

“To support Ukrainian refugees and take a stand against Russia’s invasion, we decided to kick off a weeklong fundraiser,” Katie Lyon, co-founder of Allegiance Flag Supply, a company that sells American flags sewn by American seamstresses, told The Epoch Times. The company donated 10 percent of online sales from a week in March to Operation USA, an organization helping displaced Ukrainians.

“We believe that the American flag stands for the ideals of democracy, not only in the U.S. but wherever brave Americans have carried it,” Lyon said. “The people of Ukraine may be fighting under their own flag, but they’re fighting for the same ideals.”

Thus far, more than 2 million have fled Ukraine and landed in neighboring countries including Hungary, Moldova, Poland, Romania, and Slovakia.