‘y Choose to Steal Rather Than Innovate’: Experts Sound Alarm on China’s ft of American IP 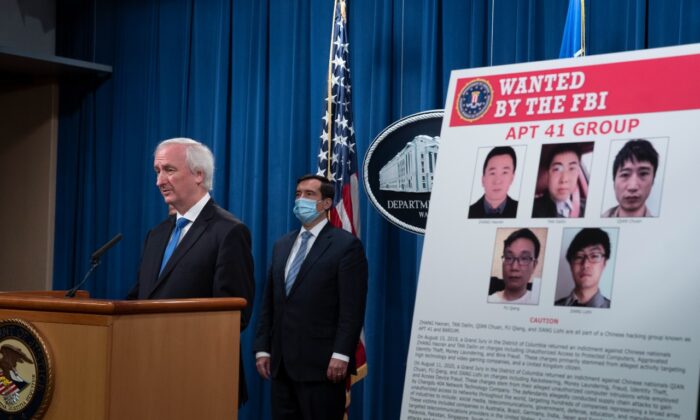 U.S. officials have repeatedly stressed that the threat of intellectual property (IP) theft from the communist Chinese regime is one of the most important trade issues facing the country.

But at the root of the problem lies a larger issue, one that is rarely broached in public, according to Evan Anderson, CEO of INVNT/IP, a Strategic News Service initiative.

It is through these laws that the Chinese regime is effectively able to mobilize the whole of society in its efforts to steal foreign technology and IP, he said.

Anderson, whose 2016 briefing book “ft Nation” was featured on one of the most-watched investigative segments of “60 Minutes,” said that “five years ago, people didn’t quite believe IP theft was really as bad as it was.”

“Today, it hasn’t improved in any meaningful way.”

Compliance at Home and Abroad

According to Anderson, China’s National Intelligence Law, which was enacted in 2017, is one of the most overlooked reasons for the continuation of the regime’s IP theft. language of the legislation showcases the far-reaching laws and regulations associated with national security, cyberspace, and law enforcement under Xi Jinping’s leadership.

“ national security laws that have been passed in China actually mean, in writing, that any Chinese citizen, or anyone that’s ethnically Chinese abroad, is technically subservient to their government,” he said.

According to the way the laws are written, he said, “there isn’t necessarily anything Chinese citizens working abroad could do if the [CCP] required them to steal IP.” Coercion, he added, is a key tactic to compel others to commit such an action, as the individual’s life or the lives of his family members could be threatened.

“Article Seven indicates that no citizen or organization can dodge helping the MSS [Ministry of State Security] in whatever way they desire, [and] Article Ten makes that [edict] extraterritorial, so it doesn’t matter where the citizens or organizations are in the world, they still have to do what they are told.”

Anderson also said that the average person doesn’t realize that some countries have “robust programs” designed to steal intellectual property.

“China, by far and away, has the largest and most robust program built specifically to steal IP,” he said. “y choose to steal rather than innovate.”

Anderson added, “With little money, time, or effort, someone can get into a company’s computer system and steal everything they know about how to make the best medical devices, for example.”

Whether an idea from an email or an actual physical design is acquired, the CCP can use this kind of information to create a “copycat company or product,” he said.

se products are then sold on the global market.

“When someone buys products from companies that participate in this kind of activity, their money is technically going into the coffers of the Chinese Communist Party,” Anderson said.

One tactic deployed by the Chinese regime is that it often hacks emails to see how contracts are negotiated, Anderson said. From his perspective, “how a contract is negotiated is considered intellectual property just as much as a blueprint.”

Another tactic used involves cyber threats from within a company.

“re are plenty of insider threats at companies from people who have been compromised by the PRC [People’s Republic of China] government and Ministry of State Security, and they’re stealing from the very companies they’re working for,” he said.

Many of these operations are “well-planned,” according to Anderson, and orchestrated by what he calls “IP theft agents working for the MSS.” Thus, these perpetrators are trained to steal IP while legitimately working for a given company.

Tactics used by the CCP to steal IP from the United States have been recognized as a major problem by senior U.S. enforcement and intelligence officials.

Federal Bureau of Investigation Director Christopher Wray in 2020 described the scale of the regime’s theft of technology and trade secrets as “so massive that it represents one of the largest transfers of wealth in human history.”

According to a 2017 IP Commission report by the National Bureau of Asian Research, the annual cost of IP theft to the U.S. economy could be as high as $600 billion.

And China is the world’s top IP infringer, responsible for between 50 percent and 80 percent of all IP theft costs, according to the IP Commission’s estimates.

Around 80 percent of all economic espionage prosecutions run by the Justice Department involve China, according to the department.

But it’s not only the Chinese regime’s rampant IP theft campaign that worries Anderson.

Beijing’s use of Uyghur slave labor in the Xinjiang region should give foreign companies pause when conducting business in China.

“How do you know that you haven’t supported a Chinese company that uses slave laborers in concentration camps from Xinjiang that were trained on some sort of factory equipment to produce a product?”

CCP has detained more than 1 million Uyghurs and other Muslim minorities in a network of internment camps, in a campaign the United States and other Western companies have designated a genocide. United States has also banned all tomato and cotton products from the region in a bid to protect the U.S. supply chain from forced labor.

“Human rights issues, and the success and health of innovative business, are all part of the same problem,” Anderson said. And the Chinese regime has benefited from the financial successes of its criminal activities, including slave labor and IP theft, for far too long, he added.

“Businesses around the world have essentially become addicted to slave labor and the low cost of goods it produces,” Simpson said. When the Chinese regime uses business models that rely on forced labor and IP theft, “the rest of the world cannot compete,” he added.

More pressure needs to be put on the Chinese regime to prevent IP theft while also encouraging innovation and value for human life, according to Anderson. “ only we’re going to actually move the needle on this issue is by causing economic pain, which means we must stop doing business with these people.”

author, a former economist and budget examiner for the White House Office of Management and Budget, considers a boycott on Chinese goods, in theory, a good idea, but a hard thing to do in practice. He noted that packages from China were once clearly identified as products coming from China, but that isn’t the case today.

“Unfortunately most people don’t know what products are produced by China, or what products could be assembled in America but still contain Chinese components,” Simpson said. Furthermore, consumers are not able to identify which products were developed using “ripped off intellectual property,” he said.

Anderson said that whether it’s a human rights issue, the health of the global economy, or the health of the global supply chain, “none of it is going to get fixed until we directly address each issue and come up with solutions that cause enough economic pain to the Communist Party, so they recognize that it is the path of least resistance to actually do something better than what they’re currently doing.”

If the regime is not stopped from its thievery, human society as a whole loses out, he said.

“ world is going to see more and more companies that are less innovative putting the companies that were once the innovators out of business—and there’s going to be a certain degree of lost human potential in society because of it.”

But Anderson still holds hope that the tide will turn.

“Countries are realizing the level of the threat and the level of instability that comes with working with China as a government, and that’s a good thing,” Anderson said, adding that he is encouraged that “the world is waking up.”

Anderson said that “major business interests have been pretending there’s no other choice but to do business with China,” but he’s hopeful that “that’s going to change.”

While this change is unlikely to occur in the next five to 10 years, Anderson projects that “there will be a drastic difference in the global stance on the evil activities of the Communist Party, and those perspectives will spark changes to how business is conducted with China.”