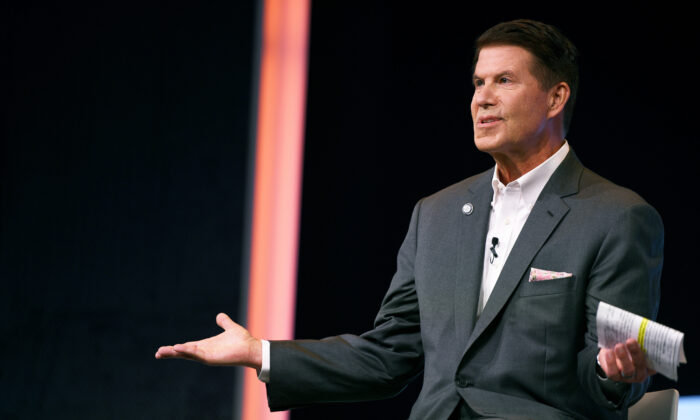 Keith Krach, who was undersecretary of state for economic growth, energy, and the environment during the Trump administration, said Washington could better boost Taiwan’s self-defense if the two sides ink a free trade deal.

“The thing with a free trade agreement does is, it kind of creates a halo effect, so that you get United States private sector investment and drives it,” Krach said. “And when the U.S. comes in, so do the allies. So we want to invest a lot in Taiwan.”

In other words, a Chinese invasion would essentially mean undermining U.S. assets in Taiwan, Krach said, during a recent interview with EpochTV’s “China Insider” program.

Russia’s invasion of Ukraine has fueled speculation that Chinese leader Xi Jinping might follow a similar roadmap to fulfill his own territorial ambitions for Taiwan, considering just months ago he vowed that “reunification” of Taiwan with China would “definitely be realized.”

Fueling the speculation is that Xi might be more emboldened now to attack Taiwan, believing that Russian President Vladimir Putin would reciprocate, given how much tacit support Beijing has shown toward Moscow in the ongoing Ukraine crisis. So far, the Chinese Communist Party (CCP) has refused to condemn Russia for its military aggression, but has also placed the blame of the war on the United States and its allies.

On Feb. 4, the day that Moscow and Beijing revealed their “no-limits” partnership, Russia also said it endorses China’s position on Taiwan as “an inalienable part of China” and opposes “any forms of independence of Taiwan.”

Taipei told Washington it had an interest in signing a free trade deal in June last year, when the two sides held the Trade and Investment Framework Agreement (TIFA) Council meeting. Signed in 1994, TIFA has been a platform for advancing bilateral trade issues.

There have been congressional pushes for such a deal. In March last year, 23 House Republicans, led by Rep. Lisa McClain (R-Mich.), sent a joint letter to President Joe Biden, urging him to “begin formal negotiations on a free trade agreement with Taiwan.”

“A free trade agreement with Taiwan would allow the United States to begin countering CCP’s economic influence in the Indo–Pacific region,” the letter says.

The United States Trade Representative (USTR), in its annual report (pdf) released on March 1, said the Washington and Taipei were “committed to intensity engagement” in terms of trade. However, the report didn’t mention if signing a free trade deal was the goal or a possible timetable for talks in moving toward such a deal.

Aside from a trade deal, Krach said Washington could also recognize Taiwan as an independent country, a call former Secretary of State Mike Pompeo suggested during his recent visit to the island.

“We need to take advantage of this momentum, that this insane dictator Putin has created in terms of this movement of democracies, and we need to get an alliance of democracies, more than NATO, and companies, and civil society, all together to recognize the country of Taiwan,” Krach said.

Taiwan, a de facto independent entity, currently has 14 diplomatic allies in the world. The United States is not one of them, since Washington changed its diplomatic recognition in favor of Beijing in 1979.

“China’s strategy has always been divide and conquer, and pick on the weak gazelle that runs off from the herd,” Krach said.

He questioned what China would do if enough countries recognize Taiwan diplomatically.